Local News > Across Tortola, and back in time

Across Tortola, and back in time

On May 22, Dr. Mitch Kent, a professor and historian at H. Lavity Stoutt Community College, was leading a tour of the college’s Maritime Museum when he paused to talk …

END_OF_DOCUMENT_TOKEN_TO_BE_REPLACED 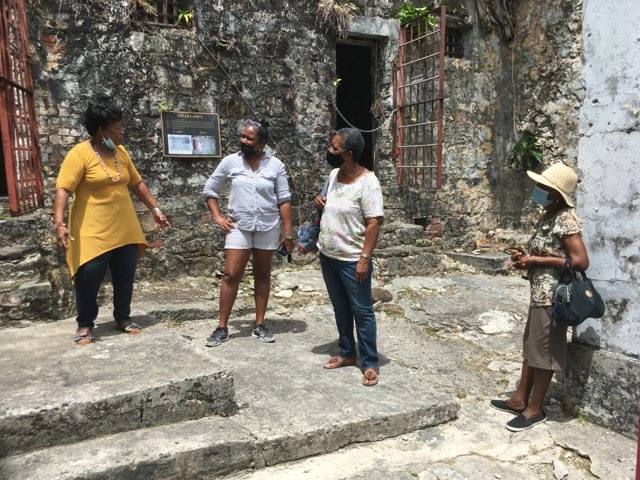 From the limestone walls of the old prison Main Street to a shrubby garden atop Ridge Road, the Department of Culture’s first ever Museum Hop took a new approach to teaching residents the story of the Virgin Islands. (Photo: JOEY WALDINGER)

On May 22, Dr. Mitch Kent, a professor and historian at H. Lavity Stoutt Community College, was leading a tour of the college’s Maritime Museum when he paused to talk about a decades-old photo of a Tortola fisherman selling his catch in St. Thomas.

After he spoke a bit about inter-island trade during this period, Rosie Smith, a tour guide at Her Majesty’s Prison Museum, said something that took Dr. Kent by surprise.

After helping lead a tour of the former prison earlier in the day, Ms. Smith had climbed aboard a safari bus parked nearby and joined the seven other people participating in the first ever Museum Hop, a tour of Tortola’s museums stretching from Long Look to Carrot Bay.

Her exchange with Dr. Kent was typical of the excursion.

The participants conversed with the guides and with each other, sharing their own memories of the Virgin Islands and their ancestors.

How exactly the territory should honour its history was a prevalent topic of discussion throughout the day.

During the drives from one museum to another, many of the women on board agreed that more resources need to be put toward cultural preservation,which they said is often overlooked in favour of economic development.

The Museum Hop is not the only way Dr. Smith hopes to bolster the territory’s cultural offerings.

During a quick stop at the 1780 Lower Estate Sugar Works Museum, which is currently closed, Dr. Smith spoke about her plans to reopen the museum with support beams to correct a slanting wall, interactive activities for children who visit, and statues of some of the “heroes”  who helped lead the people to freedom.

“I don’t just like to talk about the pain, because we had a lot of heroes during this time, too,” Dr. Smith said.

While slavery and its legacy were the main topics of the earlier stops on the trip, the tour covered the territory’s more recent history as well.

At the VI Maritime Museum, Dr. Kent said that for much of the territory’s existence, sailors were its main connection with the rest of the world.

He spoke at length about one of the VI’s most notable contributions to seafaring: the Tortola sloop, a style of cargo boat identifiable in part by its main sail — which Dr. Kent likened to a leg of mutton —and its lack of bowsprit.

The builders of these boats were revered figures in their community, and launchings were grand social affairs, Dr. Kent said.

On the day of a launch, a feast would be held on the beach, and after the men had their fill of rum, they would work together to push the boat into the water, he said.

As a means of practical travel, these boats were eventually replaced by motorised cargo vessels, but they were still being used for inter-island travel as recently as the 1970s and 1980s, Dr. Kent said.

He pointed to a photo from 1960, which showed a Tortola sloop carrying a car, as a prime example of “the melding of old and new” that occurred during that time period.

This same time period is the subject of much of VI artist Reuben Vanterpool’s artwork.

Walking with a headset through his Jenesis Studios high atop the Ridge Road, Mr. Vanterpool used a replica of his childhood home and his brightly coloured paintings as prompts to help him describe what it was like coming of age in mid-century Tortola.

By his telling, it was a time of self-sufficiency, as “every village in Tortola had different remedies for [healing] cuts and bruises,”and of tight-knit community, with children crammed into classrooms with the rest of the kids from their village.

Many of his pieces — such as a painting of a young man and woman showering with collected water behind the cover of rocks and leaves, and another of schoolchildren walking barefoot down a muddy path — depict life in theVI before the economic boom brought by the tourism and financial services industries.

After giving a tour of his studio, Mr. Vanterpool invited the group to stroll around his garden, where he and his wife picked licorice leaves and cocoplums for his guests, many of whom went home with fresh herbs stuffed inside their purses.

Explaining why she decided to join the Museum Hop, Norah Manns, who was born on Salt Island, said, “I just wanted to get out of the house … and add my two cents in between.”