The picture of how the Covid-19 pandemic is affecting the Virgin Islands workforce became a bit clearer last week. As more businesses responded to government’s request for information, 337 companies …

END_OF_DOCUMENT_TOKEN_TO_BE_REPLACED 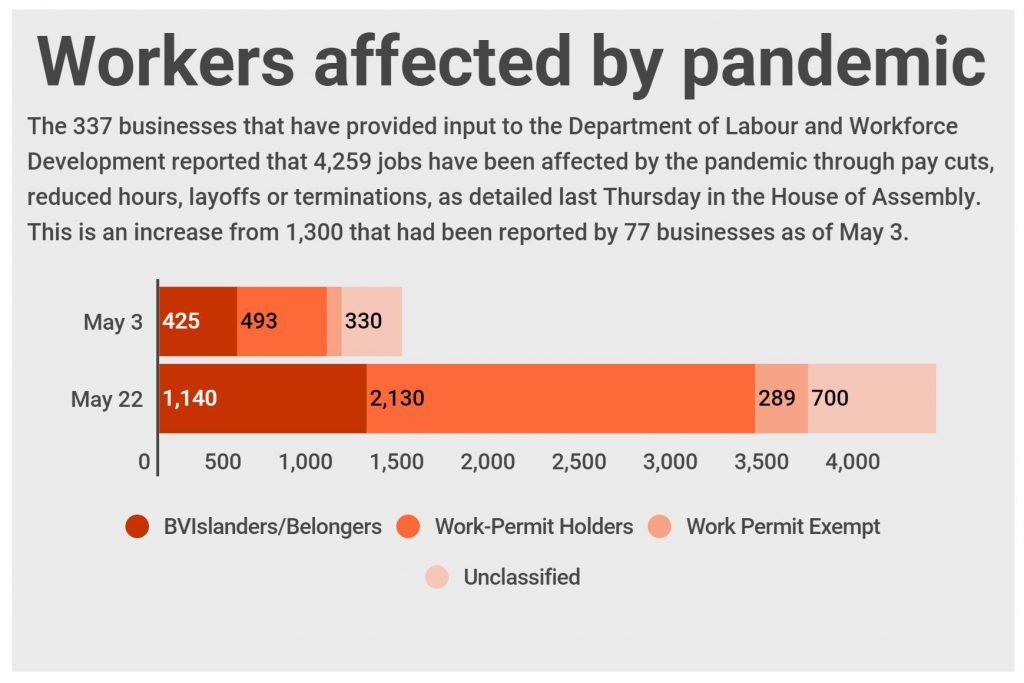 The picture of how the Covid-19 pandemic is affecting the Virgin Islands workforce became a bit clearer last week.

As more businesses responded to government’s request for information, 337 companies reported that more than 4,000 jobs have been affected by either reduced hours, pay cuts, layoffs or terminations, tripling what was reported in early May.

This data informed leaders’ decisions about how to implement an economic stimulus package, Natural Resources, Labour and Immigration Minister Vincent Wheatley said June 11 in the House of Assembly.

Of those 337 businesses, 77 stated that they were temporarily closing — up from the 33 reported in early May, Mr. Wheatley said.

The businesses also reported that 767 people had been laid off — apparently on the “temporary” basis allowed under government’s interpretation of the 2010 Labour Code — and 165 were terminated.

However, the numbers could be much higher: The minister did not indicate approximately how many businesses have not yet responded to the survey.

“As we continue to receive reports on business status, it has become even more evident that the tourism industry is hardest hit and may take some time to be revived not only in the BVI, but worldwide,” Mr. Wheatley said. “This is not only difficult for that sector, but for the BVI economy in general as we all benefit from tourism indirectly.”

Work-permit holders who are laid off or terminated are asked to immediately contact the Immigration Department.

However, Mr. Wheatley said people whose work and entry permits will expire during their temporary layoff period can get an extension. This provision also extends to people not in the VI right now.

“I am aware that many work permit holders who are currently outside the territory due to port closures are becoming worried as their entry permits may have expired during that time,” Mr. Wheatley said. “Cabinet has considered these types of persons and has approved the re-entry of persons with expired entry permits once the borders are open, and allowing work-permit holders to return.”

These permit holders have one month after borders reopen to return and renew their paperwork.

The ministry is still seeking employment information from businesses.

An example workforce assessment date spreadsheet is available on the government’s homepage at www.bvi.gov.vg. Businesses can contact the Department of Labour and Workforce Development at labour@gov.vg or 468-9960 and the Immigration Department at immigrationinfo@gov.vg or 468-4703 with questions.

Mr. Wheatley reiterated that employers should notify their employees of changes to their status before contacting the department.

“I would like to again thank the employers who have displayed BVILove by keeping their employees engaged the best they can during this new regular, and those employees who continue to be patient and understanding of the decisions made by their employer, whether in their favour or not,” he said.