The first formal meeting since 2020 between the governments of this territory and the United States Virgin Islands resulted into boost the tourism and marine industries and improve wireless technology. …

END_OF_DOCUMENT_TOKEN_TO_BE_REPLACED 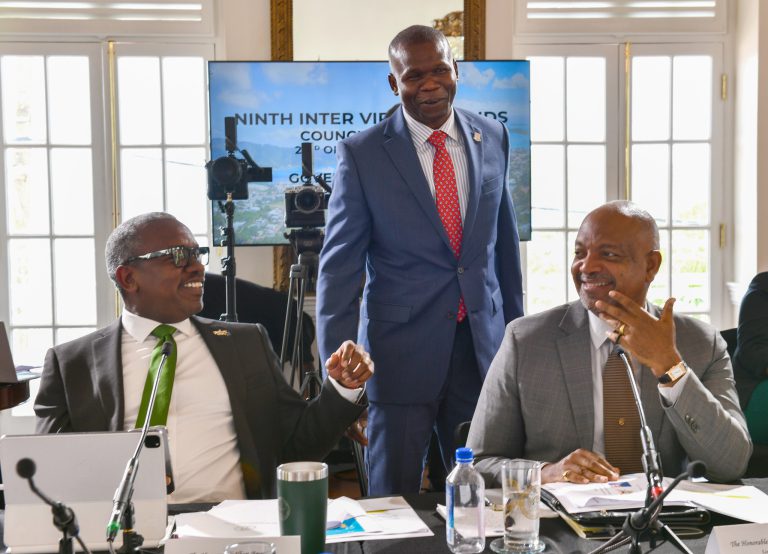 The first formal meeting since 2020 between the governments of this territory and the United States Virgin Islands resulted into boost the tourism
and marine industries and improve wireless technology.

“It’s just an example that you are us, and we are you. We are one Virgin Islands people,” Dr. Wheatley said at the event, according to a press release from the USVI Government House.

“The task before us is to be able to maximise the areas of mutual benefit and really honestly and truly confront those few areas where we have areas of conflict. I believe we can do it.”

Dr. Wheatley further elaborated on the talks during a press conference on Friday, explaining that the delegations reached an agreement that “will result in greater cooperation between the BVI and USVI on marine and maritime issues that will support our tourism industry on this side.”

He said to expect announcements about the agreement during the 50th BVI USVI Friendship Day, set for Oct. 22 in this territory.

Mr. Bryan said in his closing remarks last Thursday that by working together, the two territories could maximise the benefits of their combined tourism assets and provide a better experience for visitors, including working toward a year-round season.

“A lot of things can be done. It all starts with communication, and I think the communication that was started here today in terms of maximising the total
benefit of our tourism product is key,” Mr. Bryan said. “There are a lot of things coming up in the British Virgin Islands that Virgin Islanders want to go to, and we want to make sure we expand what that means for them. People from all over the world are interested in the food festivals and music festivals and all the other things that go on in the British Virgin Islands.”

He added that a mutual goal is expanding the tourist season beyond November-to-May.

“That’s something we can work on together, extending benefits of not only the US Virgin Islands, but also in the British Virgin Islands,” Mr. Bryan said.

In his remarks, Dr. Wheatley stressed the importance of reliable wireless internet service, which he said “can help us in our schools, in our tourism product, and in our community.”

He added that the two delegations discussed “matters of mutual benefit and mutual interest to make sure that our residents and visitors have a very
clear, accommodating transportation between our respective homes.”

To that end, he explained, they touched on the charter boat industry and water taxis.

“We were able to look at fishing, both the USVI and the BVI side, and we certainly had great discussions about our memorandum of understanding and being able to update it,” hensaid.

Dr. Wheatley, Deputy Premier Kye Rymer and other VI ministers met with Mr. Bryan, Lieutenant Governor Tregenza Roach, and members of their Cabinet to discuss various topics, including ways to use the USVI fiber-optic network to assist this territory in setting up free wi-fi hotspots for residents,

Dr. Wheatley said. “I think a key topic of this meeting today was digitising
and the internet,” Mr. Bryan said in his remarks. “Technology will allow us to do things that we’ve never been able to do before. Ease access in terms of business.

Also on the agenda were discussions about developing passes to bypass customs procedures for USVI residents to attend festivals here, as well as preclearance of US Customs for visitors landing on St. Thomas.

Further discussions surrounded a possible reciprocal agreement to streamline business licence requirements for day charters and water taxis to
operate between the territories; reciprocal agreements regarding commercial and recreational fishing licensing; and requirements and cooperation by both
territories to streamline the overnight charter market.

Mr. Bryan also said he had given Dr. Wheatley’s delegation a letter naming USVI Department of Consumer Affairs Commissioner Richard Evangelista as the secretary general to the IVIC for the territory.

The next meeting of the IVIC, which was founded in 2004, will take place in this territory.

Dr. Wheatley called last week’s meeting a “great restarting of the IVIC” and said the council “will make sure that we get our secretariat up and running with all our working committees, so that we can make tangible progress.”