Travelling Teddy loves giving hugs — lucky for him, because everywhere he goes he gets them. The cuddly stuffed bear and his “moderator,” United Kingdom-based educator and Virgin Islands native …

END_OF_DOCUMENT_TOKEN_TO_BE_REPLACED 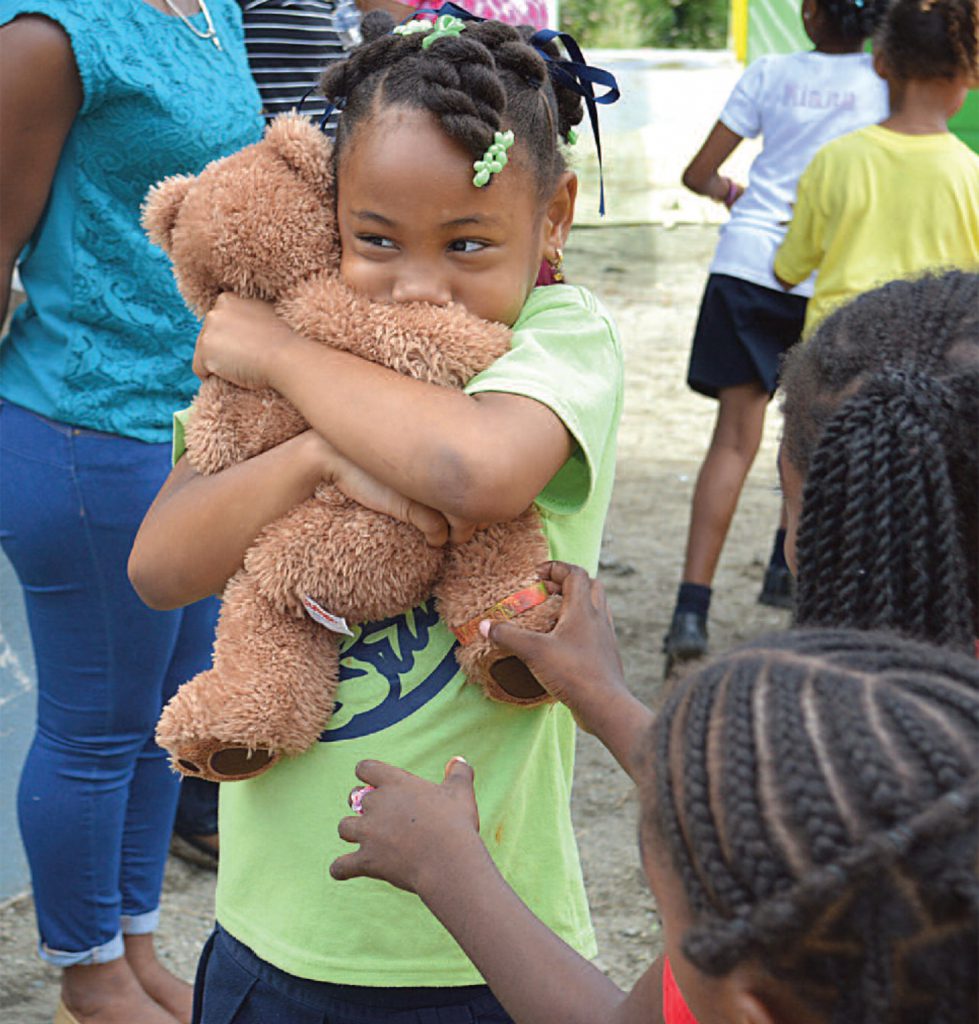 A Pelican Gate student hugs “Travelling Teddy” during his visit to the school Friday. The bear makes appearances around the territory in an effort to cheer up young people during the recovery process. Photo: CLAIRE SHEFCHIK

Travelling Teddy loves giving hugs — lucky for him, because everywhere he goes he gets them.

The cuddly stuffed bear and his “moderator,” United Kingdom-based educator and Virgin Islands native Carol Arneborg, have been witness to many aspects of hurricane recovery in the Virgin Islands.

Daily posts on his official Facebook page share where he’s been spotted: sailing on a Hobie cat in Oil Nut Bay; checking out rare plants with the National Parks Trust on Virgin Gorda; and riding around with linesmen from the BVI Electricity Corporation as they restore power.

“We took him surfing, too,” Ms. Arneborg said. “He got a little wet. Maybe that wasn’t such a good idea.”

After the hurricane, Ms. Arneborg was inspired to launch a project similar to Flat Stanley, in which children around the world send paper cutouts of a storybook character back and forth, taking photos and posting them to show where the character has travelled.

She wanted to focus specifically on hurricane recovery, and decided that a bear was an ideal character.

“In times of trauma, … a bear is often used as a tactile, sympathetic companion,” she said.

Along with the main Teddy character, who travels around documenting the recovery, there are also “Little Teddies” — paper miniature bears that can be sent back and forth between the VI and abroad with art and messages.

For the project, Ms. Arneborg is working in collaboration with the Ministry of Education and Culture and has received support from the BVI Tourist Board.

“He lifts spirits wherever he goes,” she said.

Ms. Arneborg explained that Travelling Teddy is all about rebuilding. Wherever somebody is putting a roof on a house, fixing a door or a window, or reopening a business, the bear might show up.

“[He] is designed for children, but adults seem to enjoy him, too,” she said. “He shows the recovery in a positive way and reminds us of the enjoyment we can still find on the islands.”

“But it’s not about me,” she said. “It’s about the reactions Teddy gets.”

On Friday at Pelican Gate, teacher Lois Freeman-Augustine gathered the student body in the schoolyard.

“How many of you are living in different houses?” she asked.

A few hands shot up.

“The trees!” one girl shouted.

Other children chimed in, talking about their school, their homes, and the landscape around them.

Then Teddy appeared. Every child got a chance to give him a hug. The younger ones seemed like they didn’t want to let him go, and occasionally his legs and arms got a tug by a child’s overeager neighbour.

Next, Ms. Freeman-Augustine held out a handful of Little Teddies that had been coloured and decorated by students at the Port Regis School in Dorset, England as messages of support for VI children.

Ms. Freeman-Augustine held up the colourful messages one by one.

“This bear looks like my bear,” one read. “It has a heart on it. I hope it makes you happy.”

“Don’t give up,” read another.

Then it was time for the Pelican Gate students to get out their crayons and markers and scribble messages, which would be taken back to their new pen pals in England.

Soon, Teddy was off on his next adventure.

“He offers some light relief from daily life after Irma,” explained Ms. Arneborg as the children waved goodbye. “And everyone needs a bear hug once in a while.”

This story originally appeared in the Feb. 15, 2018 edition.