Local News > Tree of Hands back to targeting neediest

Tree of Hands back to targeting neediest

It wasn’t quite Santa’s sleigh, but the Aeropost truck that arrived at Island Roots on Sunday did have a real-life “elf”to help unload the nearly 600 donated gifts that had …

END_OF_DOCUMENT_TOKEN_TO_BE_REPLACED 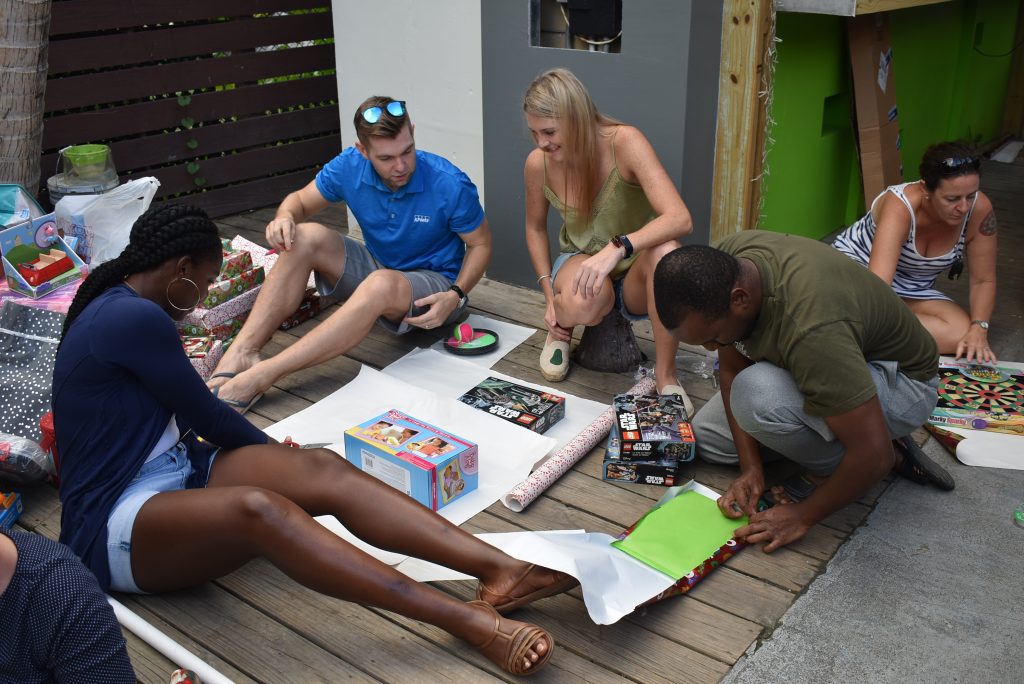 Volunteers wrap presents at the Tree of Hands gift drive on Sunday at Island Roots Backyard in Road Town.The items will be presented to children around the territory. (Photo: CLAIRE SHEFCHIK)

It wasn’t quite Santa’s sleigh, but the
Aeropost truck that arrived at Island
Roots on Sunday did have a real-life
“elf”to help unload the nearly 600 donated
gifts that had just arrived for the annual
Tree of Hands gift-wrapping event.

Ron Bruer — or “Captain Elfis”— is a
regular at Christmas events in the United
States and abroad, donning his red-and-green
getup to spread cheer at homeless shelters and hospitals and teaming up with celebrities. Although he’s been travelling to the Virgin Islands for decades, this is the first year he has participated in Tree of Hands.

On Friday, he helped unload the gifts
at Island Roots Backyard. Then, along
with around 40 other volunteers, he began
painstakingly clearing a space to lay out
paper and bows to begin wrapping.

“For 300 events,I was with another organisation
that provided Christmas for
people that otherwise wouldn’t have
Christmas,” he explained. “I’ve gotten
around at Christmas.”

Here, he said, the spirit is no different,
though residents often don’t expect to see
an elf frolicking among them.

“You have to sometimes impart the
spirit; that’s the great thing about doing it:
There’s a lot of spontaneity,”he said.“People
are ‘Oh boy, get a load of this guy!’”

Although the number of gifts was still
enormous, organiser Alexandra Durante
pointed out that it was a fraction of last
year’s haul.The scaled-down focus has allowed
the organisation to renew its concentration
on children and families who
are truly disadvantaged, which was the
original intent of the programme.

“Last year, you can’t really tell any child
they’re not underprivileged — especially after a disaster like that,” she said.“So we opened it up to collect gifts to every kid.”

Thanks to donations from abroad, in 2017 the agency ultimately distributed more than 2,000 gifts to around 1,200 children during a massive distribution event at Tortola Pier Park, coinciding with the Lions Club
Christmas tree lighting.

This year, however, organisers will be back to working from a provided list of needy families.

Donors from the VI and abroad choose a gender and age group of a child to buy for, with KPMG and Aeropost covering the cost of shipping.

She explained that the organisation works with “churches,
the Family Support Network, Social Development and principals that are seeing students that are a little bit struggling.”

They also collect donations to pay those families’ electricity bills and provide Christmas dinner for some of them, as well as buying a wheelchair for a child with a disability. Ms. Durante doesn’t distribute them all herself,
though.

“There are some families I do work with personally,” she
said, adding that she otherwise relies on a network of community leaders to distribute the
gifts.

Beginnings
Ms. Durante’s father, artist Lutai Durante, began the drive
decades ago with his wife Carol, relying on their networks of family and friends to identify recipients.

The effort started small,with only around 50 gifts. “We used to go around and look at who [our children]
played with in Carrot Bay and Cane Garden Bay; go on the
beach. We would look at the kids [who didn’t have toys]; we’d look at them and say, ‘uh-huh,’” Mr. Durante recalled.

“We’d go to the school and ask us to let them know who needs help. Anybody complaining about not being able to get a book or a brush or a straw, we say, ‘Good, that goes to them.’”

This year, Christian MacDonald of Island Roots Backyard
hosted a “mulled wine throwdown”during the event, in
which he and Aurelie Legangneux would each brew
up their signature recipes, with each vote consisting of a donation to charity “We love wine and we love
Christmas, so we decided to go head to head,” he said, adding,

“Tree of Hands wanted to use the space. It’s a little small with all these presents bursting at the
fence. It’s my day off, but I’m happy to be here.”

All told, Tree of Hands has distributed almost 20,000 gifts
over the years.Ms. Durante said she’s satisfied with the scale of this year’s approach.

“The big thing about Tortola is a lot of people have a lot of
pride,”she said.“A lot of people on our list didn’t show up last year. This year we’re making sure we know everyone on our list that we know are underprivileged get a gift.”