In July, the Recovery and Development Agency awarded a contract worth more than $300,000 to Sand Dollar Marine Consultants to install sea markers that would help boats safely navigate the …

END_OF_DOCUMENT_TOKEN_TO_BE_REPLACED 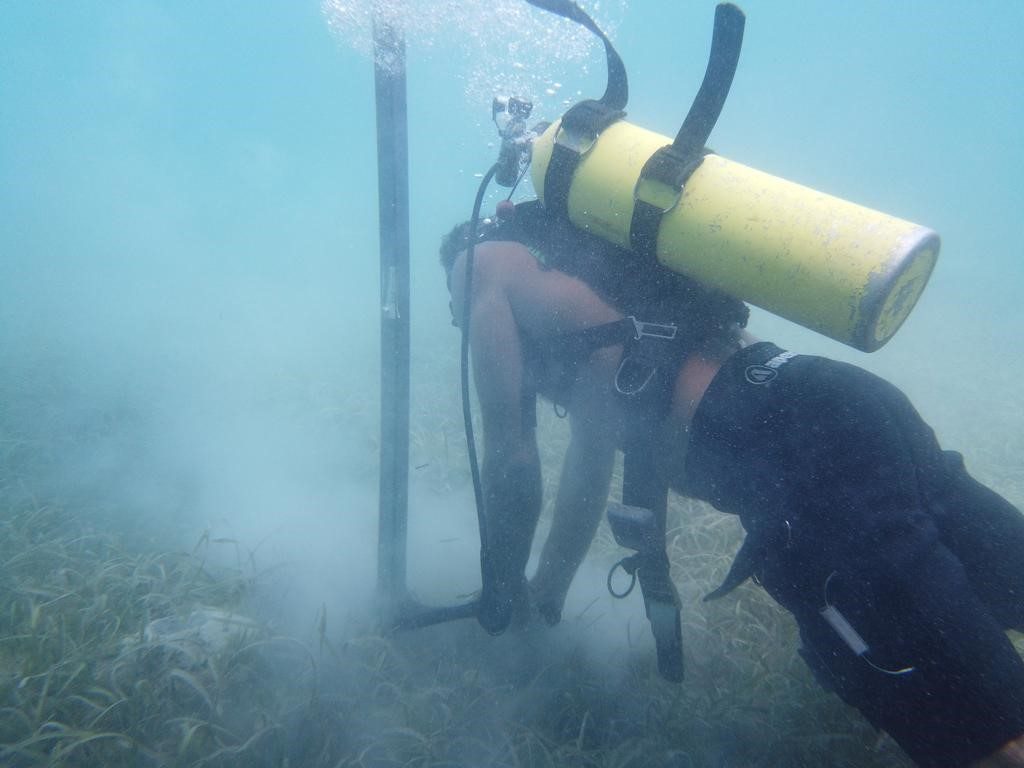 A diver with Commercial Dive Services, a subcontractor of the sea marker project, installs preliminary infrastructure ahead of the buoys going in. (Photo: RDA)

In July, the Recovery and Development Agency awarded a contract worth more than $300,000 to Sand Dollar Marine Consultants to install sea markers that would help boats safely navigate the territory’s waters.

These buoys are currently being installed in various areas, including Trellis Bay, where some business owners are worried that the markers have created a new boating channel that disrupts the bay’s mooring field, causing more harm than good.

“It’s very clear to anyone who is in the marine industry that this is detrimental to … business, but it’s also dangerous for tourists and any small boat marine traffic that has to cross this channel,” said Aragorn Dick-Read, who owns Aragorn’s Studio in Trellis Bay.

Prior to Hurricane Irma, the boating channel had been located to the west of Bellamy Cay— the island that previously housed the Last Resort restaurant — but the buoys marking this path washed away during the storm, said Captain Raman Bala, acting director of the Virgin Islands Shipping Registry.

To allocate space for an eventual expansion of the airport, the new channel passes east of Bellamy Cay, a change that had been planned since before Irma, Mr. Bala said. But he acknowledged that the change has troubled residents who feel it has disturbed the bay’s mooring field and reduced the number of available mooring sites.

Mr. Bala understands this concern, and said he is confident stakeholders will continue organising public meetings.

“We have to resolve this,” he said, adding, “We have to … find out what they want and how we can do it.”

Mr. Bala did not provide a date for the meetings, but said he hopes they come soon.

With the approach of seasonal and monthly events that draw masses of tourists, such as the monthly full-moon parties held at Trellis Bay, Mr. Dick-Read hopes that project leaders can find a way to reverse course quickly, he said.

“We’ve got full moon on the 12th and we’ve got New Year’s Eve, and if we don’t have our mooring field back in shape by then, then the country loses lots of revenue,” Mr. Dick-Read said.

Yesterday, he added that Premier Andrew Fahie had promised to ask the Ministry of Natural Resources, Labour and Immigration to review the matter right away.

Business owners were notified about the impending installation before the contract with Sand Dollar Marine Consultants was signed, according to the RDA’s Facebook page.

On June 19, the RDA hosted a meeting with Trellis Bay businesses regarding the sea marker installation and a separate project to remove derelict boats from the territory, a Facebook post stated.

Mr. Dick-Read was out of the territory at the time, Ms.Penn added.

New sea markers are being installed at Jost Van Dyke, Cane Garden Bay, Virgin Gorda and Anegada as well, according to an Oct. 2 post on the RDA’s Facebook page.