Former Postmaster General Pascha Stoutt and two other people have been arrested and charged in connection with “historical financial irregularities” at the BVI Post, according to Police Information Officer Akia …

END_OF_DOCUMENT_TOKEN_TO_BE_REPLACED 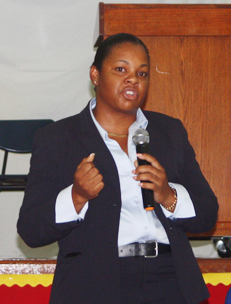 Former postmaster general Pascha Stoutt (shown above at the First District Career Expo in 2015) is among three people charged in connection with “historical financial irregularities” at the BVI Post, police said.(File photo: The BVI BEACON)

Former Postmaster General Pascha Stoutt and two other people have been arrested and charged in connection with “historical financial irregularities” at the BVI Post, according to Police Information Officer Akia Thomas.

The police stated that on Friday Ms. Stoutt, 45, of Windy Hill, and Wendy George, 43, of Virgin Gorda, were charged with “various offences” in relation to an ongoing investigation into the irregularities.

On Monday, Ganesh Surujbally, 34, of Virgin Gorda, was also charged in relation to the irregularities, police said.

Police did not list the specific charges, and Ms. Thomas said they would not comment further since the investigation is ongoing.