Jost Van Dyke was discussed repeatedly in the House of Assembly last Thursday, as opposition member Mitch Turnbull grilled government ministers about the state of repairs on the island where …

END_OF_DOCUMENT_TOKEN_TO_BE_REPLACED 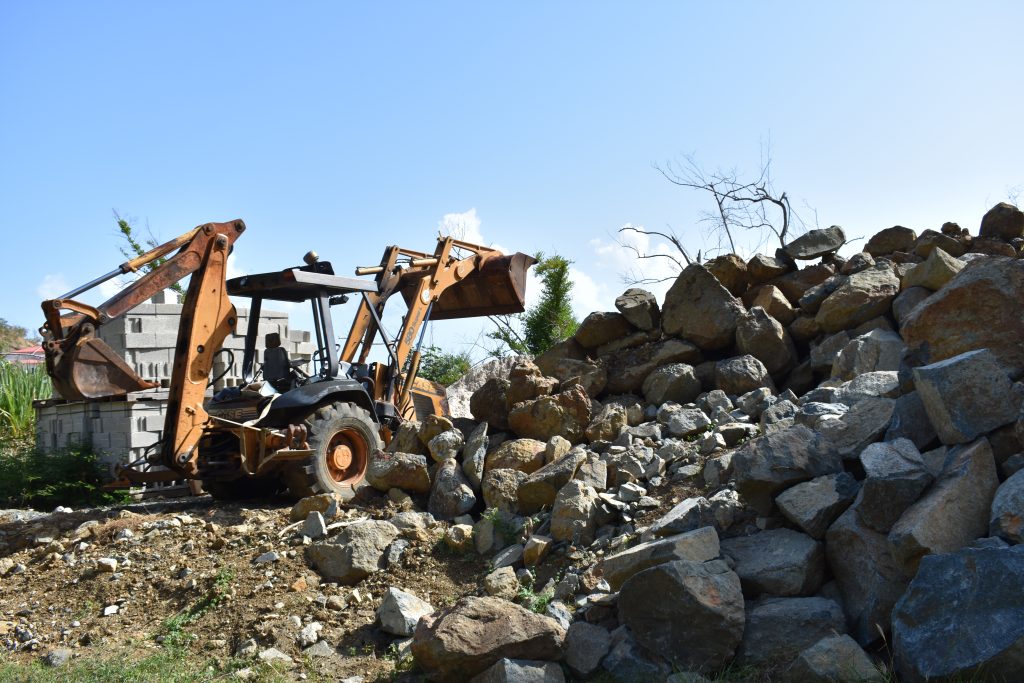 A backhoe loader on Jost Van Dyke. Residences on the sister island suffered some of the most severe damage from Hurricane Irma. (Photo: CLAIRE SHEFCHIK)

Jost Van Dyke was discussed repeatedly in the House of Assembly last Thursday, as opposition member Mitch Turnbull grilled government ministers about the state of repairs on the island where residents often claim to be neglected by government.

In response, ministers gave updates on housing, the school, the reservoir and the ferry terminal.

Designs for permanent concrete structures for JVD residents still living in tents and domes have been prepared and submitted for approval, with construction expected to begin by the end of the year, according to Health and Social Development Minister Carvin Malone.

He said that each structure is estimated to be completed within four months of the awarding of the contract.

In the meantime, he added, domes have been transferred to the island, and will be supplied with utility connections and sanitary facilities in conjunction with the Recovery and Development Agency and Unite BVI.

In response to another question, Education, Culture, Youth Affairs, Fisheries and Agriculture Minister Dr. Natalio “Sowande” Wheatley called the relocation and rebuilding of the primary school on JVD a “high priority” but said no cost has been estimated yet to be put forward for the 2020 budget.

He added that the recently opened Enis Adams Primary School was identified as a model that could be used for the construction of other schools.

Earlier in the week, he said, he conducted a site visit with the architect for the newly opened school to see if the plans can be scaled for JVD Primary, whether on the existing site or the proposed new site.

Over the next few weeks, Dr. Wheatley said he and the architect would explore the cost of both options and then present their findings to the JVD community.

He added that preliminary discussions have been held with prospective donors, and said he was “optimistic” that construction would begin within the first quarter of 2020.

The JVD reservoir is now functioning at 100 percent, and the island’s residents are receiving a constant supply of potable water, Transportation, Works and Utilities Minister Kye Rymer said last Thursday.

Mr. Turnbull, who as the member for the Second District represents JVD, thanked Mr. Rymer for his work on the project, and also reminded him about an ongoing problem of bursting pipes caused by high water pressure.

Mr. Rymer responded that he would look into implementing a pressure management system.

Mr. Rymer also said that because of budget restraints, the TWU Ministry purchased a pickup truck for the JVD Public Works Department to help with maintenance works instead of the backhoe and three-yard truck that Mr. Turnbull requested at the last sitting.

Mr. Turnbull in response questioned whether the pickup truck was adequate, to which Mr. Rymer replied that it was, and suggested that Mr. Turnbull look to private citizens or contractors for use of a three-yard truck.

Mr. Turnbull emphasised that in the event of an emergency it would be risky to rely on the services of a private citizen.

In response to another question from Mr. Turnbull, Premier Andrew Fahie said works on the ferry terminal in Dog’s Hole will commence by late November and be completed within three months.

He added that a meeting with all stakeholders was scheduled for Sunday of this week, where BVI Ports Authority representatives would discuss their ideas and plans with legislators and community members.

Mr. Fahie said the ferry terminal remains a “high priority” for his government.

Mr. Fahie also gave an update on the refurbished JVD building which is to house customs, immigration, police and the district officer. The building, he said, will be handed over and renamed in honour of the late Albert Chinnery as planned on Dec. 5.

The renaming of the building was agreed upon by JVD residents in 2016, but the handover ceremony had been long delayed, according to Mr. Turnbull, who inquired about the facility.