Local News > This turtle doesn’t have Covid-19, but it is in quarantine

This turtle doesn’t have Covid-19, but it is in quarantine

On Sept. 29, a team of researchers with the Association of Reef Keepers was checking on the territory’s turtles when they discovered one with swollen, discoloured tumours on its eye, …

END_OF_DOCUMENT_TOKEN_TO_BE_REPLACED 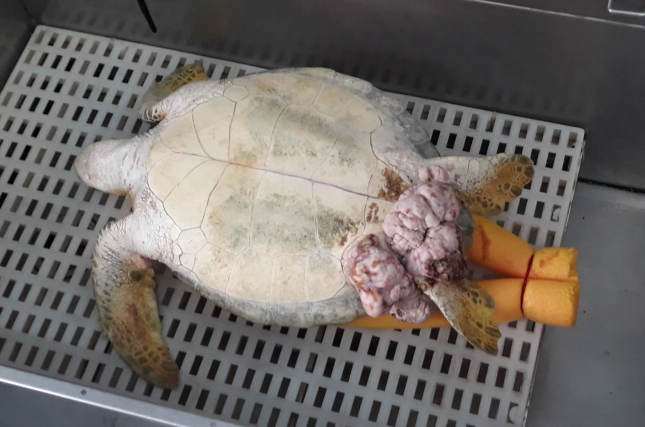 This turtle, which was found on Sept. 29 by researchers with the Association of Reef Keepers, is currently in quarantine while scientists help it recover from the disease causing tumours on its eyes and body, with the hope that it can one day be returned to the ocean. (Photo: PROVIDED)

On Sept. 29, a team of researchers with the Association of Reef Keepers was checking on the territory’s turtles when they discovered one with swollen, discoloured tumours on its eye, rear flippers and lower extremities, according to ARK Managing Director Dr. Shannon Gore.

The scientists subsequently fished the turtle out of the water, placed it in quarantine, and conducted a series of tests, which found that the turtle had contracted a disease called fibropapillomatosis, making it the first turtle in the Virgin Islands to be diagnosed with this disease by a veterinarian specifically trained in sea turtle rehabilitation, Dr. Gore stated.

“While Covid-19 has posed various constraints to dealing with this situation, it has prompted positive action within the community to act quickly and resourcefully to [care] for this threatened species,” Dr. Gore wrote in a Sunday press release.

While the turtle remains in quarantine, Dr. Sarah Weston of Canines Cats and Critters, and Dr. Latisha Martin from the Department of Agriculture and Fisheries, are working alongside sea turtle specialists to concoct a plan for the turtle’s recovery and return to the ocean.

“Both the welfare of the individual turtle and the BVI’s turtle population are of paramount importance throughout this process. More information will be made available as this situation evolves,” Dr. Gore stated.

While the cause of the disease is not fully understood, the evidence “shows that a chelonid fibropapilloma-associated herpesvirus is most likely responsible,” Dr. Gore explained.

Symptoms from the disease range from the mild, with only a few small tumours, to the fatal, with tumours covering the eyes and obscuring the mouth, making it hard for an infected turtle to feed.

“However,” Dr. Gore wrote, “there is documentation of the spontaneous regression of smaller tumours.”

Outbreaks of the disease have been recorded occasionally since at least the 1980s, with a majority occurring off the Hawaiian Islands, Florida and Puerto Rico, Dr. Gore wrote.

The first known cases of FP in the VI were documented on three turtles off the coast of Peter Island in 1996. More recently, a turtle that was “stranded” after a deadly boat strike in 2018, and a turtle photographed by a snorkeler in Virgin Gorda’s North Sound in 2019, both appeared to have tumours caused by the disease, Dr. Gore wrote.