As the sun set over the horizon in Josiahs Bay last Sunday, dozens of people gathered on the beach to watch the season’s last known leatherback turtle nest hatch on …

END_OF_DOCUMENT_TOKEN_TO_BE_REPLACED 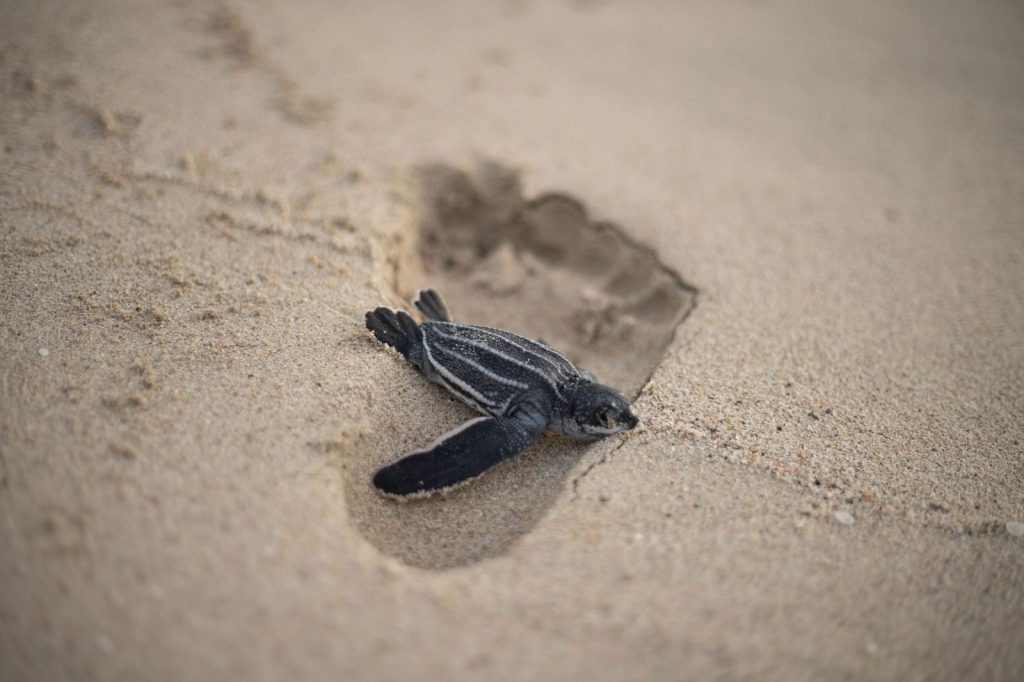 A baby sea turtle makes it way across sand and over footprints to the sea last week at Josiahs Bay. (Photo: ZARRIN TASNIM AHMED)

As the sun set over the horizon in Josiahs Bay last Sunday, dozens of people gathered on the beach to watch the season’s last known leatherback turtle nest hatch on Tortola.

The hatchlings crawled out from under a foot and a half of sand and slowly made their way to the ocean, eventually being carried away with the current.

Of the 101 eggs that were laid in the nest, 54 turtles hatched and made it to sea. According to biologist Dr. Shannon Gore, 39 of the eggs didn’t develop, and eight turtles died.

“We found three turtles that were still trying to make their way out,” she said after going back to the beach to excavate the nest on Monday afternoon.

This year, the number of leatherback turtles that came to nest on the shores of the territory was “extremely low” in comparison to previous years, she said.

To her knowledge, there were only five nests on Tortola this year, and four of those definitely hatched. She isn’t sure about the fifth nest, which may not have hatched at all.

She’s also unsure why there were fewer nests than usual.

“Either the temperature of the sand wasn’t right, or they weren’t fertilised, or there was some kind of bacterial infection,” she said.

This year, she added, it was difficult to monitor the nests, since she and others who usually watch them were unable to go out as usual due to Covid-19 curfews and restrictions.

Austin Freeman, a former customs officer who has been watching the turtles for decades, pays close attention to their hatching patterns. He has watched the nests at Trunk Bay this year, where one turtle laid three nests. On some days, he would sit for hours waiting for a sign of movement, often setting up fishing lines with a friend.

Usually the turtles hatch in the evening, he said, and you can see them in the moonlight.

Two nests hatched on Trunk Bay, but he doesn’t know what happened to the third one.

Instead, he focused his efforts on the final nest at Josiahs.

Steve Howes, owner and instructor at BVI Surf School, said Sunday that he hadn’t seen a nest hatching during the daytime in many years.

One resident said she waited 40 years to witness the spectacle, and she was so excited that she brought a bottle of champagne and two glasses to celebrate the occasion with her friend.

For about three hours, people took photos and celebrated the turtle hatching, sometimes leaving big footprints that the turtles had difficulties climbing over.

Mr. Howes and others took turns raking the sand smooth to help the turtles on their journey.

After making it out to sea, the turtles spend years in the north until they mature, and then the female turtles return to the same shores where they hatched to lay eggs, according to Dr. Gore.

It’s unclear how they are able to find their way back, but Dr. Gore referred to an internal instinct as an “ancient GPS.”

“They have a magnet in their brain that helps guide them,” she said, speaking metaphorically.

But fewer turtles returned this year than normal, she said.

Dr. Gore speculated that this could be due to an increase of developments on the hillside contributing to water running across the beach. This causes the sand to harden, and makes it difficult for nesting turtles.

A recent grant from the United Kingdom could help answer the question of why the nest numbers dropped.

The Marine Conservation Society and the University of Exeter secured two grants from the UK government’s Darwin Plus Initiative in order to boost sea turtle conservation efforts in both the VI and Monserrat. The nearly $300,000 grant for the VI will support a three-year programme.

Here, the MCS will work with the Association of Reef Keepers to support the recovery of critical habitats such as reefs and seagrass meadows. The aim of the programme is to understand the status of turtles using VI habitats, improve local understanding of turtle conservation, and develop new legislation recommendations and a conservation action plan to safeguard the VI’s turtle populations.

Dr. Gore, who is ARK’s managing director, said the grant may also help monitor nests via aerial footage. She also supported the idea of new legislation that would protect turtles when they are nesting, and the nests until hatching.

“The legislation needs to be strengthened because the turtles that nest here are born here, they leave for years, and the only time they return is to lay their eggs. When they come back to lay their eggs and it’s open season [to hunt turtles] and there’s no maximum size limit, those turtles could be caught,” she said.

Better beach policy and management would also help towards conservation, she added.