COVID-19 > Coronavirus confirmed in the Virgin Islands, curfew in effect

Coronavirus confirmed in the Virgin Islands, curfew in effect

The government announced the first two confirmed cases of COVID-19 coronavirus in the Virgin Islands yesterday as nearly 5,000 viewers tuned in to a Facebook livestream. Hours later, a territory-wide …

END_OF_DOCUMENT_TOKEN_TO_BE_REPLACED 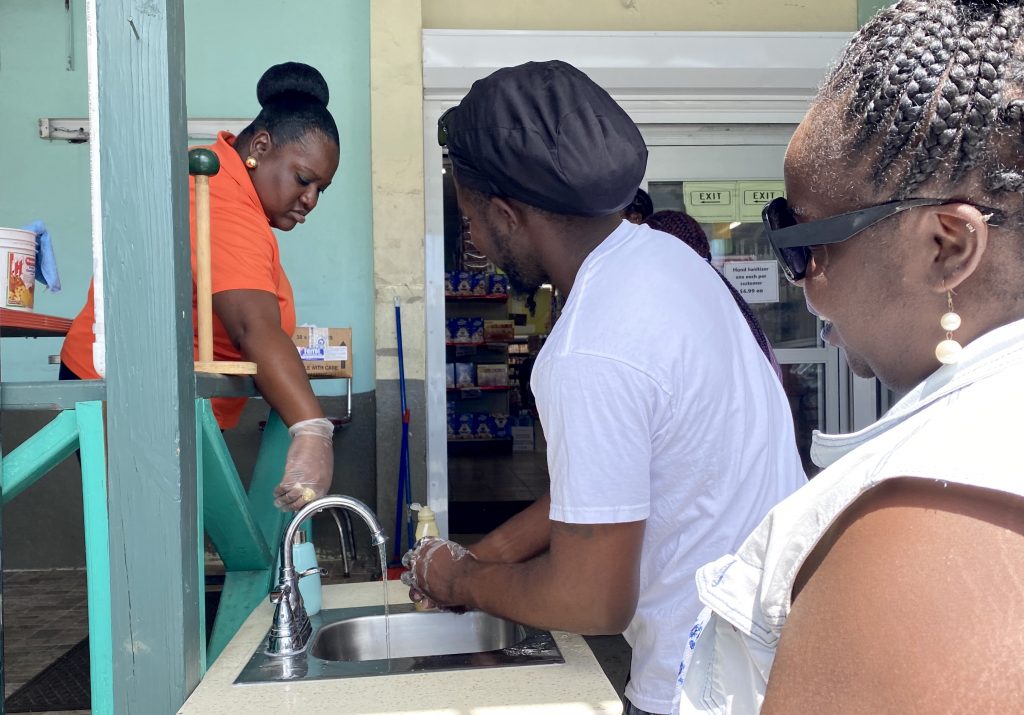 A hand-washing station has been set up outside Bobby’s Supermarket in Road Town in an effort to ramp up sanitary practices during the pandemic. Many grocery stories set up similar stations, as did other types of businesses. (Photo: DANA KAMPA)

The government announced the first two confirmed cases of COVID-19 coronavirus in the Virgin Islands yesterday as nearly 5,000 viewers tuned in to a Facebook livestream. Hours later, a territory-wide curfew took effect.

“It is official that the BVI has confirmed its first two imported cases of COVID-19,” said Premier Andrew Fahie, who hosted the announcement alongside Governor Gus Jaspert and Health and Social Development Minister Carvin Malone. “Immediately the [Health Emergency Operation Centre] contingency plan was engaged.”

The three officials came together for another live conference yesterday evening to announce a curfew that same night, and tonight until tomorrow morning, from 8 p.m. to 6 a.m. But a 24-hour curfew will begin tomorrow night at 8 p.m. and last until 6 a.m. on April 2 with the exception of essential workers, government announced.

“Today in cabinet we were able to make some more decisions,” Mr. Fahie said in his address. “The curfew will remain in effect for six days. … I ask you to adhere to this curfew because the police will be out enforcing this curfew.”

Mr. Fahie disclosed that the first patient who tested positive for COVID-19 coronavirus is a 56-year-old male resident who travelled recently from Europe and exhibited mild symptoms while passing through the Terrance B. Lettsome International Airport.

The second is a 32-year-old male resident who travelled from New York and came into contact with someone who tested positive for coronavirus on March 8. He arrived on Tortola on March 10.

In both cases, the medical hotline was contacted: Both patients were tested, and both remained under mandatory quarantine in their homes, Mr. Fahie said.

“There is no reason to feel ashamed or to stigmatise anyone that is being tested,” the premier added.

The positive results came yesterday, and officials shared the information the same day.

Mr. Malone added that nine other people — out of a total of 27 who have been tested here — are still “under investigation” awaiting test results. All nine are under mandatory quarantine, he said.

Separately, 108 people are under self-quarantine, he added. Neighbouring countries and territories have reported cases as well.

“This is not unexpected. We have seen an increase in cases in the region,” Mr. Jaspert said before assuring residents that measures have been taken by government in response to the test results. He encouraged the public to follow the restrictions government has recently placed on the territory.

As part of efforts to stop the spread of the virus, over the past week government has closed borders to all arrivals, including Virgin Islanders; ordered all businesses to close between 8 p.m. and 6 a.m.; and limited gatherings to 20 people or fewer.

“When you continue to ignore the measures, you’re not doing it to spite government: You’re doing it and endangering your own family,” Mr. Fahie warned residents.

In a press conference on Tuesday evening, Mr. Fahie and Opposition Leader Marlon Penn took the podium together in a show of solidarity.

“The gravity of the current pandemic and its potential threats are well understood by us,” Mr. Penn said. “In those conversation there is one constant: We both want the same thing for all of us.” Mr. Fahie spoke similarly.

“We have both decided to put down the political party lines because this one is about country,” he said.

Earlier that day, the premier told reporters, he toured the isolation units set up at the Dr. Orlando Smith Hospital through an initial $3 million in funding, and said he was “happy that it’s ready.”

Mr. Fahie, who was asked during the press conference about possible economic stimulus measures, cited re cent announcements by two of his ministers.

On Friday, Education, Culture, Youth Affairs, Fisheries and Agriculture Minister Dr. Natalio “Sowande” Wheatley announced a $2 million stimulus package for farmers and fishers. The package intends to help each district become self-sustaining, the premier said Tuesday, though he did not provide specific details on how the money would be spent.

Last Thursday, Transportation, Works and Utilities Minister Kye Rymer also announced that all water bills from the Water and Sewerage Department will be suspended for a month.

Mr. Fahie said both packages were “clear-cut,” so the government went ahead and enacted them. Other stimulus measures will be considered as well, he said, but more time is needed.

He added that countries that rush economic stimulus measures often see them backfire.

Asked about helping small businesses and employees who have been laid off from work, Mr. Fahie said that the discussions are ongoing. He encouraged the unemployed to register at the Department of Labour and Workforce Development.

“We want to bring forward an economic stimulus,” Mr. Fahie added. “We have some more discussions to have with the [House of Assembly].”

These discussions are to occur this week, he said. Yesterday an HOA meeting was scheduled for 10 a.m. tomorrow at the Save the Seed Energy Centre in Duffs Bottom — a session the premier said also would be used to discuss changing legislation that would enable more enforcement of re- cent restrictions.

Also yesterday, businesses affected by COVID-19 were asked to provide the Labour and Workforce Development and Immigration departments with information including the affected functionality of the business and employees who have been or will be laid off.

On Tuesday, Mr. Fahie also gave an update about an incoming supply of test kits.

So far, the territory has spent $8 million in response to the coronavirus, the premier said, and that includes ordering test kits. The government requested 5,500, but the global demand for the kits is great, he added. The territory, he said, stocked an initial 300 kits.

Even with 1,500 additional kits on the way, everyone with flu-like symptoms won’t be tested, Mr. Fahie explained. Only those who meet specific criteria will be tested, and those who are showing the symptoms of the virus were told to call the hotline rather than coming into the hospital and risking others’ lives. Mr. Fahie assured residents that the territory is “far from a state of emergency” but is adamant about adhering to the policies in place.

Unlike in the United States and many other countries, he said, a “state of emergency” would not be called in the VI unless the government has effectively lost control. This, he explained, is a rare occurrence, though it happened after Hurricane Irma.

Asked about VI nationals abroad who are now barred from returning home, Mr. Fahie said his own children are among them.

He stood by the decision to shut borders and said that the “cut off time is now.”

“If we don’t make these hard and fast decisions, then we’re going to be faced with ‘who’s gonna use the ventilators and who won’t?’” he added.

This situation has been seen in Italy, where the virus hit hard and overwhelmed the health systems. The BBC reported that funerals are banned there and that those in isolation are denied any visitors. Spain, meanwhile, turned an ice rink into a morgue, as more people die from coronavirus, CNN reported.

Though numbers have not been updated since last week’s in- formation from Health and Social Development Minister Carvin Malone, officials said previously there are only six ventilators in the territory and 12 hospital beds in the isolation unit.

During the Tuesday press conference, Mr. Fahie promised that Mr. Malone would disclose statistics yesterday. He had not done so as of press time yesterday afternoon.

After a special meeting of Cabinet on Sunday, government decided that beginning at 11:59 p.m. the same day, all airports and seaports would be closed to inbound passengers, including nationals, at least until April 6.

The BVI Airports Authority followed up with its own message, with acting Managing Director Clive Smith stating that the closure “will allow passengers to depart the territory between the hours of 7 a.m. and 7 p.m. until April 6.”

Passengers with confirmed tickets or those wishing to depart the territory were asked to contact their airlines immediately.

On Monday, the Ministry of Health and Social Development asked the public to report non-compliance with quarantining. The department circulated a bulletin on social media and the government website asking people to report anyone who has recently travelled through Asia, the United Kingdom, the US, Europe or other Caribbean islands and is not following quarantine guidelines.

More Cabinet decisions from Sunday banned all non-essential gatherings of 20 people or more between March 23 and April 17, and the closing of all businesses between 8 p.m. and 6 a.m. from March 22 to April 17.

More than 428,000 confirmed cases have been reported globally, resulting in the deaths of over 19,000 people.

In Wuhan, China, where coronavirus first began to spread, bus service has resumed after the country’s nine-week lockdown, though new “imported” cases have arisen. The country has had more than 81,000 cases and 3,200 deaths since coronavirus began spreading at the end of 2019.

Other countries with high numbers of confirmed coronavirus cases include Italy, the US, Spain, Germany, Iran, and France.