The Virgin Islands remains free of known active cases of Covid-19 in spite of concerns aired in recent days about possible infection among returnees, but the pandemic is not slowing …

END_OF_DOCUMENT_TOKEN_TO_BE_REPLACED 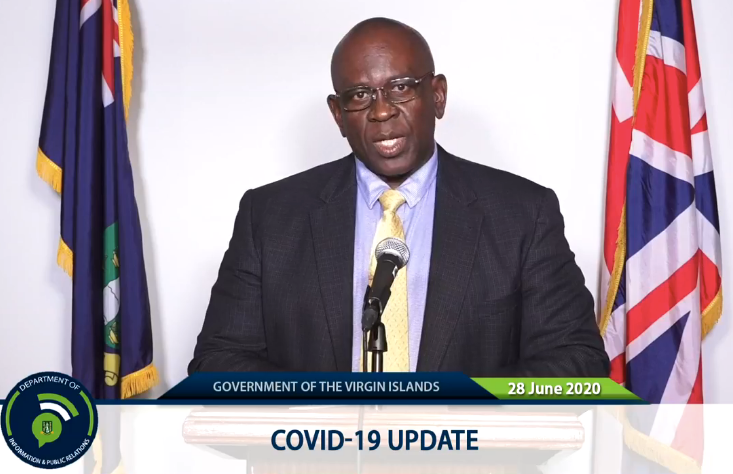 The Virgin Islands remains free of known active cases of Covid-19 in spite of concerns aired in recent days about possible infection among returnees, but the pandemic is not slowing down, according to the World Health Organisation.

Six months have passed since the WHO first received reports of a cluster of cases of pneumonia of unknown cause in China. These later turned out to be cases of Covid-19, which has spread across the globe since then, infecting more than 10 million people and causing over 500,000 deaths to date.

“A PCR testing at the Dr. D. Orlando Smith laboratory was carried out upon arrival as a precautionary measure to verify whether any of the two persons under investigation were currently carrying the virus, although neither of them had exhibited symptoms of the disease,” he said.

The ministry’s usual protocol is to test people at the end of their quarantine, not as soon as they arrive in the territory, according to Mr. Malone. Anyone who exhibited symptoms would be isolated and tested, but others are transported to a quarantine facility and tested on the last day of a 14-day mandatory quarantine.

“To date, 268 nationals have returned to the Virgin Islands since the restricted border reopening [on June 2],” he said. “The Ministry of Health has conducted testing on 169 returning residents, and all test results of these residents have been returned negative.

Currently, he added, there are 110 people in quarantine, including 99 nationals and 11 people who entered the territory illegally in recent days. He did not say whether the 11 people were tested.

As of June 26, 439 people have been tested in total in the territory.

On Friday, Mr. Malone stated in a press release that the VI testing capacity stands at 3,150, though he did not specify how this number was derived.

In mid-May, Governor Gus Jaspert said that the territory had received 4,800 test kits from the United Kingdom. He also mentioned more supplies coming from the UK during a press conference on Tuesday.

During his Friday statement, Mr. Malone went on to say that “pre-emptive Covid-19 testing continues to be carried out on” health care workers, travellers, people undergoing surgery, all hospital patients, all emergency room admissions, all residents exiting quarantine, and all people who meet the case definition for Covid-19.

He also said that 80 more nationals are scheduled to arrive to the territory this month.

“A total of 621 re-entry registrations have been received, with 500 verified by the Immigration Department,” he said.

Plans to re-open the borders to work-permit holders and visitors have not yet been announced.

“We must not become complacent at all about Covid-19,” he said in an opening statement. “It’s important that we keep safe social distancing, we keep wearing masks when we are in close contact in confined spaces, and practice good hygiene as well.”

A plan for mass testing has not been announced yet, but officials hope to launch one as soon as supplies are plenty, according to Chief Medical Officer Dr. Irad Potter. He mentioned in April that the territory had ordered 10,000 test kits, but an update on that shipment has not been announced.

Global experts have said that aggressive contact tracing and testing is key to staying ahead of the pandemic.

On Monday, WHO Director General Dr. Tedros Adhanom Ghebreyesus praised South Korea for suppressing the outbreak without vaccines or therapeutics.

He attributed this success to four main initiatives undertaken by the South Korean government: testing, contact tracing, isolating and quarantining. He added that the public has a responsibility to do follow the rules.

“Time after time and country after country, what we have seen is this virus can be suppressed if the governments are serious about the things they have to do, their share, and if the community can do its share,” he said.

Transportation, Works and Utilities Minister Kye Rymer released a statement on Friday explaining the decision, saying that there is an “extensive disregard for safety” by bikers who don’t wear helmets and continue to drive unlicensed and unregistered bikes.

“Sadly, we continue to witness an increase in road accidents involving motorcycles,” he added. “This situation cannot continue, and it will not be tolerated.”

Mr. Rymer said he has spoken with Police Commissioner Michael Matthews, and violators will “not be given any quarter or leniency.”

He also said that at the end of the three-week extension of the motorcycle restriction, there will be another review.

“The [Department of Motor Vehicles] continues to welcome our bikers to get right, get legal, and encourage them to ride safe,” he said.