M’Kyiah Turnbull took a brush doused in bright pink paint to a wall lining part of Cane Garden Bay’s beach. Though her favourite colour is blue, she chose pink because …

END_OF_DOCUMENT_TOKEN_TO_BE_REPLACED 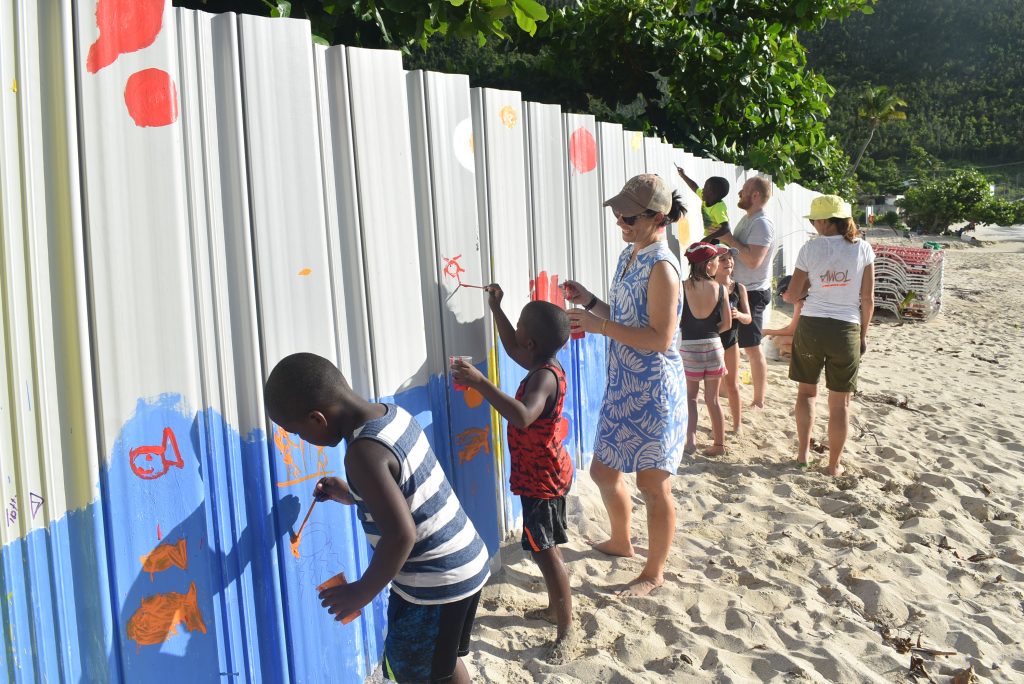 Though her favourite colour is blue, she chose pink because she wanted the wall to have a rainbow effect. The colourful paintings, the 9-year-old explained, would make life better for Cane Garden Bay.

“I love art,” she said. “Art is my favourite subject.”

M’Kyiah was among a handful of children who attended a two-part community art event in CGB on Sept. 23 which involved painting both the beach wall — which lines one side of the area’s cemetery — and a separate wall by the CGB Baptist Church.

A cohort of international artists, visiting the territory to facilitate art therapy sessions for the territory’s students, had organised the event to supplant their main efforts in the schools.

Down the wall from M’Kyiah that afternoon, Ed Kuczaj helped some other children refill their paint cups.

“I see we’ve got sharks there,” he said, laughing as he pointed to the paintings on one section of the wall.

Mr. Kuczaj is a former art therapy course leader at CIT Crawford College in Cork, Ireland who helped organise the sessions. He also brought some of the college’s postgraduate art students, as well as various other professionals from the United Kingdom, to the territory to lead therapy workshops in the schools in December and February, all in an effort to help children in the Virgin Islands cope with the difficult psychological aftermath of Hurricane Irma.

This time around, his group visited various primary schools throughout September as the students began their new academic year. The positive development they saw between the first two visits and this one was substantial, he noted.

“What you’ll see is more individual needs rather than the group expressing some kind of concern about what happened,” Mr. Kuczaj explained. “There’s just individual issues coming up for kids.”

Those individual difficulties are still often traceable to the turbulence Irma caused in many of their lives, he added.
“A lot of the kids are dealing with broken friendships, because kids went off the island either before the hurricane or after the hurricane and they’re reestablishing their relationships now that school’s back, and I think that’s thrown up a whole set of issues for some of the kids,” the organiser said. “Time will work that out.”

The psychosocial support sessions held during all three visits were set up by Mr. Kuczaj’s son Ronan, the director of financial services firm SHRM’s VI office. Ronan Kuczaj’s company — with the help of various Virgin Islands residents and organisations — funded the activities.

The programme also operated in conjunction with Dr. Michael Turnbull’s Wellness Center Behavioral Health Clinic, which works with the Ministry of Education and Culture to provide psychological support to schoolchildren in the VI.