Amanda Milling, the United Kingdom minister responsible for the overseas territories, visited the Virgin Islands this week to discuss topics including Russia sanctions, other diplomatic affairs and public company registers. …

END_OF_DOCUMENT_TOKEN_TO_BE_REPLACED 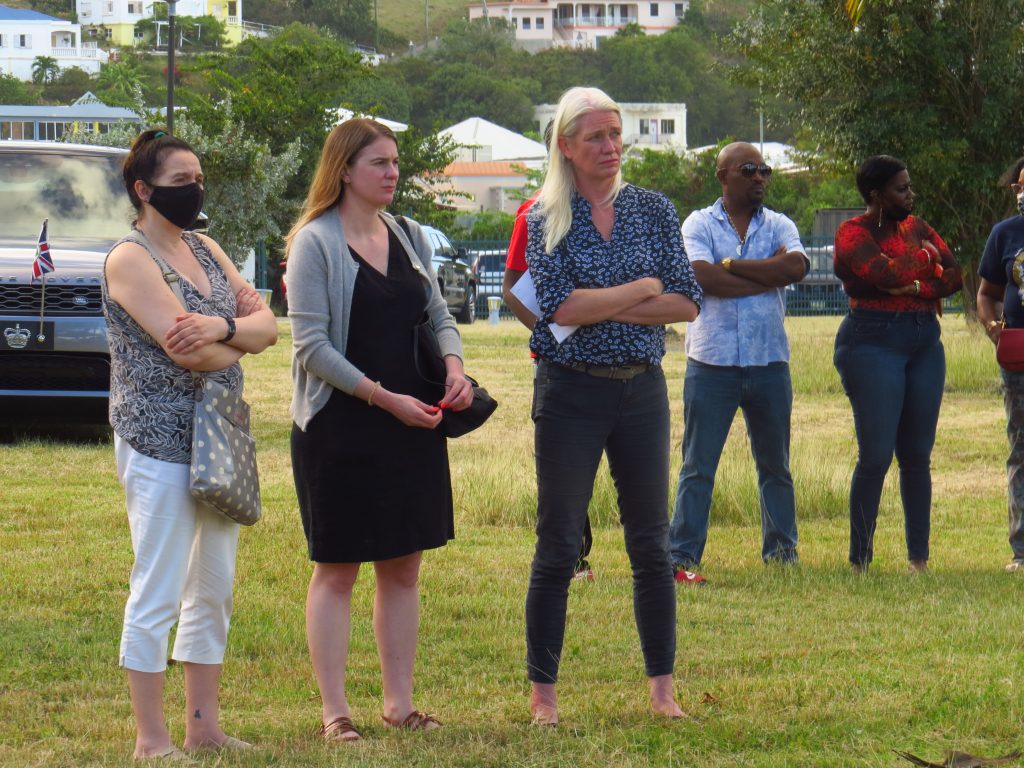 Minister for Overseas Territories Amanda Milling lends her support during a Saturday vigil against gun violence in the territory while on a visit from the United Kingdom this week. Above, she and her team listen as Governor John Rankin states that at-large perpetrators must be held to account. (Photo: DANA KAMPA)

Amanda Milling, the United Kingdom minister responsible for the overseas territories, visited the Virgin Islands this week to discuss topics including Russia sanctions, other diplomatic affairs and public company registers.

Ahead of her first trip to the VI, the minister said she was keen to learn more about the territory and gain a better understanding of what the community is facing.

“It is a privilege to be the minister for overseas territories, and I am proud of the support the UK gives, not least throughout the Covid-19 pandemic, which has had such a huge impact on BVI communities,” she said in a press release.

During her four-day visit, Ms. Milling met with leaders about the importance of OTs presenting a united front on sanctions meant to help deter Russia’s invasion of Ukraine.

She also took time to meet with community organisations and attend a vigil opposing gun violence in the VI.

Russia launched military action in Ukraine on Feb. 24, when forces crossed into the country from Belarus, Russia and Crimea.

Updates from the House of Commons Library describe an “unprecedented package of sanctions” imposed on Russia by the United States, European Union, UK and other allies around the world.

The UK Foreign, Commonwealth and Development Office said trade restrictions include a ban on exporting high-tech goods and high-end luxury goods, as well as a new 35 percent tariff on key imports from Russia.

Ms. Milling thanked leaders in the VI financial services sector for cooperating with the UK on tax and illicit finance issues, she said in a Twitter post on March 20. In addition to the sanctions, she said they discussed public registers of beneficial ownership and international financial standards.

Premier Andrew Fahie said March 22 that the VI’s regulatory agencies would continue to do their part.

“War is not the answer,” he said in a press release. “The people of Ukraine deserve to live in peace within their own internationally recognised borders, as called for by the [United Nations] General Assembly.”

He said he also appreciated Ms. Milling’s interest in the “economic ripple effects of the Ukraine crisis on the British Virgin Islands.”

These effects include higher gas prices and electricity bills.

“She understands the global economic impact the Ukraine crisis is having on economies around the world and the need by governments, including my administration, to respond accordingly,” he said.

On March 18, Ms. Milling visited the BVI Red Cross headquarters to tour the facility and its renewable solar power system, according to a Facebook post.

She met with staff and volunteers, viewed the vegetable garden, visited the thrift shop, and learned about emergency contingency stocks.

On Virgin Gorda, she met with the UK-supported Green Sprouts Eco Club. Out on the water, she saw the work of the VI Search and Rescue team and the Police Marine Unit as they monitored border security and prepared for life-saving missions.

The premier said in a press release that he was also satisfied that “good progress” was made in advancing the legalisation of medical marijuana in the territory, which stalled when the governor withheld his assent to the Cannabis Licensing Act, 2020 that passed the House of Assembly in June 2020.

Mr. Fahie thanked Ms. Milling and her team for helping move the process forward during her visit.