As the Virgin Islands works with the United Kingdom to address local governance failings exposed by the recent Commission of Inquiry, the UK is now embroiled in major scandals of …

END_OF_DOCUMENT_TOKEN_TO_BE_REPLACED 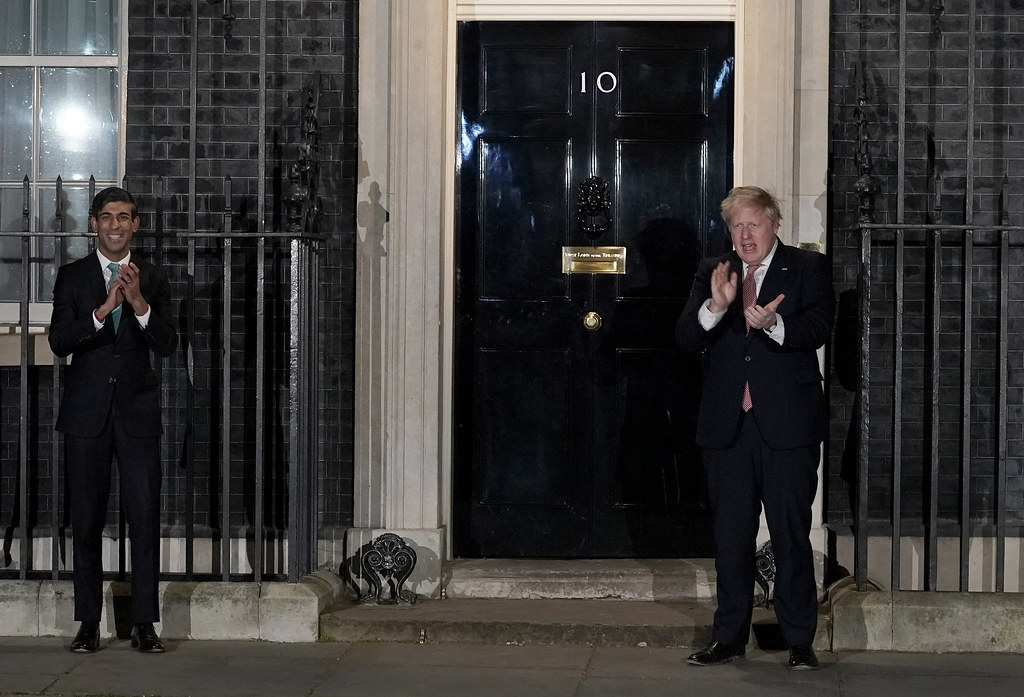 Former United Kingdom Prime Minister Boris Johnson and Rishi Sunak “clap for carers” amid the pandemic. Mr. Johnson recently resigned, and Mr. Sunak is one of the eight candidates vying to replace him. (Photo: CREATIVE COMMONS)

As the Virgin Islands works with the United Kingdom to address local governance failings exposed by the recent Commission of Inquiry, the UK is now embroiled in major scandals of its own back home.

July 7 sent the UK political scene into upheaval with widespread changes in leadership as Prime Minister Boris Johnson agreed to step down after more than 50 members of his government resigned within 48 hours.

The turmoil leaves the VI to wonder what will happen in the coming months as decisions are made about Mr. Johnson’s successor, the timing of the next UK general election, and how the leadership changes will affect the territory’s ongoing reform efforts.

Mr. Johnson’s decision came following scandals concerning his defiance of pandemic restrictions, his appointment of Chris Pincher as Conservative deputy chief whip despite having knowledge of alleged assault incidents, and other concerns about his leadership.

The VI will doubtlessly be watching closely.

Dr. Peter Clegg, an expert on the UK overseas territories at the University of the West of England in Bristol, said it wouldn’t be surprising if the VI community questions “the moral authority and the legitimacy of the present UK government in saying, ‘You must do these things to improve your governance, to deal with the concerns over corruption, and to bring back stability.’”

Dr. Clegg added that the change in UK leadership should have a larger impact on UK domestic policy than on international relations given general consensus in the Conservative Party on issues like the conflict in Ukraine.

However, exactly how it will affect the VI and other overseas territories depends upon who replaces Mr. Johnson, and what promises they’ll have to make to fellow party members in order to secure the seat, he predicted.

“This is unprecedented political upheaval in the United Kingdom,” he added.

Mr. Johnson said on July 13 that he will hand his resignation to the Queen on Sept. 6, the day after the Tory leadership is set to choose his successor.

Meanwhile, a UK election is due within two years, and Dr. Clegg said the Conservative Party may be inclined to call it early, depending on opinion polls after a new prime minister is selected. Still, the race is on to see who will replace Mr. Johnson in the interim.

BBC reported as of July 13 that Mr. Sunak and Ms. Mordaunt were favourites by betting odds.

Mr. Sunak drew criticism in November 2020 when he announced that the UK’s foreign aid spending would be reduced from 0.7 percent to 0.5 percent of the national income despite what was promised in the Conservative election manifesto, equating to a $5.5 billion difference.

The cuts prompted Baroness Liz Sugg, then-minister for OTs and sustainable development at the Foreign, Commonwealth and Development Office, to resign, as she claimed it was “fundamentally wrong” to withhold foreign financial assistance despite the pandemic.

Dr. Clegg said even though Tory candidates to succeed Mr. Johnson would be focused on domestic policy issues including rising taxes, immigration and national insurance reform, most of them have some familiarity with issues facing the overseas territories. A successful candidate must appeal not to the general public, but to the 200,000 members of the Conservative Party who largely come from the narrow demographic living in the south of England, Dr. Clegg noted. He said this will affect what promises candidates make, particularly on hot-button issues like human rights.

When it comes to the upcoming general election, Dr. Clegg said, the Conservative Party has a distinct advantage, with several parties splitting the vote left of centre, but there is still a possibility of a Labour win.

“[Labour Party members] might have a different view in terms of how to handle the overseas territories — I think certainly less radical than some of the suggestions coming from [former Labour Party Leader] Jeremy Corbyn,” he said. “That era is over in Labour. But still, they might have a different approach to the overseas territories if they won the election.”

Dr. Clegg also noted that Amanda Milling, the UK minister for the overseas territories, was not among the more than 50 MPs who resigned from the government last week.

“Boris has had my support from the start, but resigning was the right thing to do as the damage to our party and country was getting too much,” Ms. Milling tweeted on July 7. “We now need to work together and ensure that there is some stability during this transition period.”

Dr. Clegg said Ms. Milling’s decision to retain her ministership could be a “positive thing” for overseas territories as they should retain some stability during the prime minister’s resignation.

“There’s some question marks about the credibility of the ministers that have just been appointed, because they might only be in the position for a couple of months before the new leader forms their own government,” he said.

Ms. Milling visited the VI shortly after the April 28 arrest of then-Premier Andrew Fahie and the release of the Commission of Inquiry report that recommended UK direct rule of the territory for two years.

When the Turks and Caicos Islands was undergoing its COI reform in 2009, some leaders decried alleged hypocrisy as the UK dealt with its own governance issues, and Dr. Clegg said similar sentiments may arise in the VI community with this latest scandal.