The United Nations is doubling down on efforts to support the decolonisation of overseas territories, with a dedicated committee recently approving nearly two dozen resolutions to that end for the …

END_OF_DOCUMENT_TOKEN_TO_BE_REPLACED 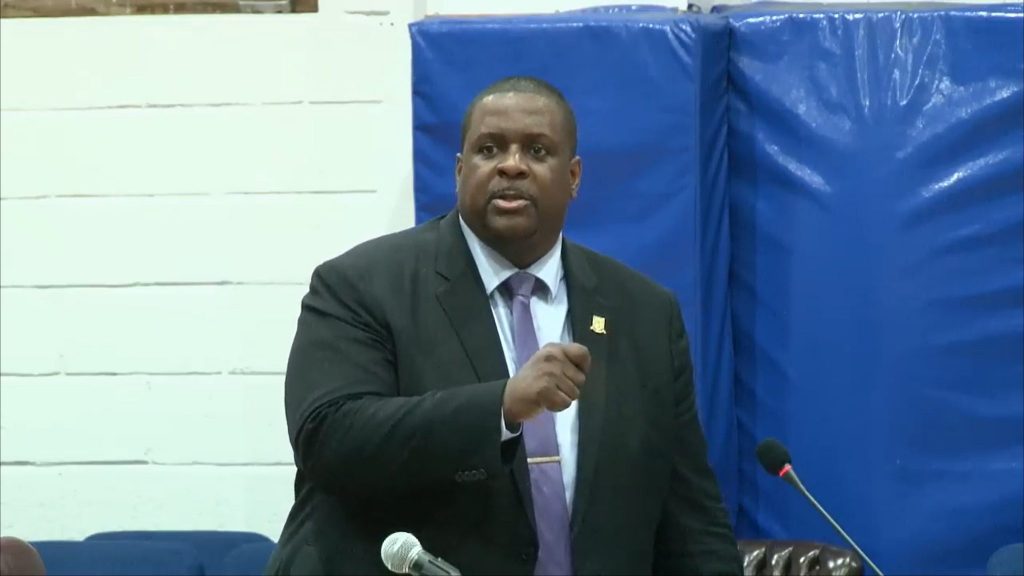 Premier Andrew Fahie notes the historical significance of the House of Assembly voting in July to review the territory’s Constitution, with an eye toward self-determination. The United Nations recently took new steps to support non-self-governing territories’ efforts in decolonisation. (Screenshot: HOA)

The United Nations is doubling down on efforts to support the decolonisation of overseas territories, with a dedicated committee recently approving nearly two dozen resolutions to that end for the UN’s 75th General Assembly session, declaring 2021 the start to the “Fourth International Decade for the Eradication of Colonialism.”

The Virgin Islands pushed for this declaration last year, said Benito Wheatley, a special envoy of Premier Andrew Fahie and policy fellow for the Centre for Science and Policy at the University of Cambridge.

The UN resolutions covered issues including deadlines for reports on socio-economic conditions in non-self-governing territories; support for territories’ pursuit of independence; the availability of information on assistance programmes; educational outreach; and others.

For the VI, such issues matter, Mr. Wheatley said.

“The key question is what improvements the people of the BVI want to their local representation,” he said when considering the importance of self-governance for territories. 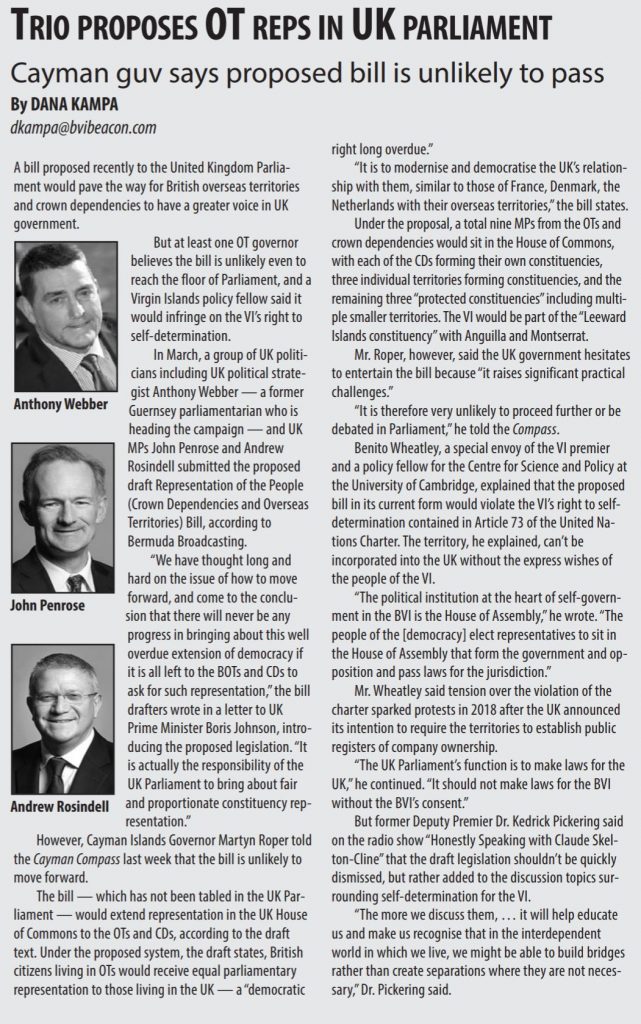 The UN currently lists 17 non-self-governing “territories whose people have not yet attained a full measure of self-government.” Nine, including the VI, are located in the Atlantic-Caribbean region and have been listed since the 1940s. Throughout the world, the UK acts as the administering power for 10 territories.

Mr. Fahie has said that international accountability provided by the UN decolonisation framework would be required for determining the future relationship between the UK and VI.

“The BVI remains on the UN list of non-self-governing territories because we have not yet determined a final status for ourselves,” the premier said in May 2019 during the UN Caribbean Regional Seminar on Decolonisation in Grenada. “We believe the UN is the international institution that has the legitimacy to preserve our right to self-determination.”

The UN’s Special Political and Decolonisation Committee (Fourth Committee) considers wide-ranging issues in the interest of its agenda to support decolonisation.

Targeting the issue of independence, the UN General Assembly approved a draft resolution titled, “Implementation of the Declaration on the Granting of Independence to Colonial Countries and Peoples by the Specialised Agencies and the International Institutions Associated with the United Nations.”

The resolution urged states to “intensify their efforts” to work with agencies on independence and provide any necessary assistance to the territories.

“Because the development options of the small island non-self-governing territories are limited, they face special challenges in planning for and implementing sustainable development, and they will be constrained in meeting those challenges without the continuing cooperation and assistance of the specialised agencies and other organisations of the United Nations system,” the resolution noted.

The VI is preparing for a constitutional review, and legislators and other residents recently have debated the merits and potential pitfalls of pursuing independence. Government is currently working on community education and outreach efforts.

“We’re talking about the fifth Constitution, and each one inches a little further in the direction of self-determination,” H. Lavity Stoutt Community College President Dr. Richard Georges said earlier this month during a Constitutional panel discussion. “At some point, we have to stop inching and start making some hard decisions about what it is we want to be and what we want to see.”

UN General Assembly members voted largely in favour of the resolution, with 115 supporting votes, two opposing votes by the United States and Israel, and 52 abstentions.

The assembly also called on administering powers to cooperate fully with the special committee to develop and finalise a constructive work programme for territories to actively pursue independence, voting in favour of the draft Implementation of the Declaration on the Granting of Independence to Colonial Countries and Peoples.

“Moreover, the text calls upon administering powers to ensure that economic and other activities in the territories do not adversely affect the interests of their peoples but instead promote development,” according to a UN statement.

The resolution also calls for the removal of military bases and activities in the territories.

The UK, US and Israel opposed this resolution, while 126 members voted in favour and 42 abstained.

Another resolution approved by the committee would require administering powers to give reports on economic, social and educational conditions in the territories to the UN secretary-general within six months of the end of the administrative year.

The resolution, titled “Economic and Other Activities Which Affect the Interests of the Peoples of the Non-Self-Governing Territories,” received widespread support, with 163 representatives voting in favour and only the United States and Israel voting to oppose it. The UK and France abstained.

“By that text, the assembly reaffirms its deep concern at the number and scale of natural disasters in the course of 2017 and their devastating impact on Caribbean non-self-governing territories,” the UN statement reads, in apparent reference to hurricanes Irma and Maria.

The assembly also said it “calls upon [administering powers] to provide all necessary assistance to those in the territories affected by hurricanes in order to alleviate humanitarian needs, support recovery and rebuilding efforts, and enhance emergency preparedness and risk reduction capacities.”

The body also expressed concern about the exploitation of natural and human resources in the territories “to the detriment of their inhabitants,” and called for greater oversight of potentially exploited marine and other natural resources.

In recent months, the VI government has rolled out more than $10 million worth of construction contracts under the $65.5 million recovery loan legislators obtained from the Caribbean Development Bank about three months after Hurricane Irma.

But the Recovery and Development Agency remained deeply underfunded for the many rebuilding projects it is charged with completing as part of a public-sector recovery that initially was estimated to cost $721 million. The main £300 loan guarantee from the UK intended to back the recovery still hasn’t materialised more than three years after the hurricanes despite negotiations with the UK that apparently stalled amid the Covid-19 pandemic.

The UN assembly also requested that the UN Department of Global Communications “continue its efforts to update web-based information on the assistance programmes available to the non-self-governing territories,” according to the UN statement.

The Dissemination of Information on Decolonisation draft resolution XVIII received 168 positive votes, two opposing and one abstention from France.

Other resolutions sought to declare 2021-2030 the Fourth International Decade for the Eradication of Colonialism; ensure administering powers effectively work to spread information from state-offered study and training facilities to students in the territories; enact territory-specific resolutions; and set the committee’s work programme heading into the 76th session.