Government appears to have violated its own laws by breaking ground on the Brandywine Bay Development Project before receiving permission from the Planning Authority. Work on the project began at …

END_OF_DOCUMENT_TOKEN_TO_BE_REPLACED 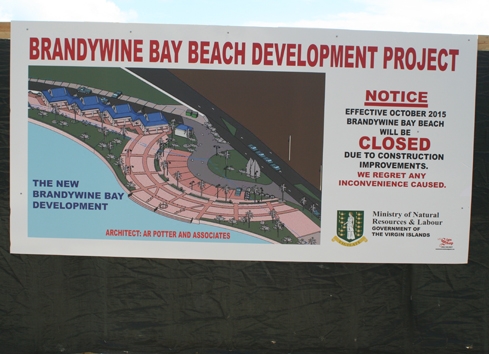 A sign warns that work is under way at the Brandywine Bay Development Project, even though the Planning Authority has not approved the project. Photo: KEN SILVA

Government appears to have violated its own laws by breaking ground on the Brandywine Bay Development Project before receiving permission from the Planning Authority.

Work on the project began at least as far back as Oct. 25, when an excavator was seen digging up what appeared to be about 400 square feet ofbeach that is soon to accommodate eight vendor spaces and other amenities designed to attract tourists.

Mr. Adams explained that the project application had been reviewed and sent back to the developer – the Ministry of Natural Resources and Labour – for further information.

“We’ve made some recommendations on the application, but haven’t heard back from them,” Mr. Adams said last week, clarifying that the recommendations mostly had to do “with traffic circulation.”

The excavator continued work over the weekend. By Saturday, it had dug a pit next to the ocean that was as deep as 20 feet in places and contained standing water.

Asked on Monday whether the Town and Country Planning Department would issue a stop order for the project since approval still hadn’t been granted, the chief planner said that his staff is looking into the matter.

According to the planning application, the MNRL plans to build 3,929 square feet of vendor space and 35 parking spaces.

An environmental impact assessment for the project – which is required for projects that fall within 100 feet of the ocean, as is the case with this development – also states that there will be four additional elements to the project: “upgrades” to the existing shoreline, stabilisation measures, minimal land reclamation, and the development of a swim area.