Local News > Under bill, whistleblowers could get 10 percent cut

Under bill, whistleblowers could get 10 percent cut

Legislation protecting people who sound the alarm about corruption and other illegal activity in the public or private sector made it to the House of Assembly this month, and the …

END_OF_DOCUMENT_TOKEN_TO_BE_REPLACED 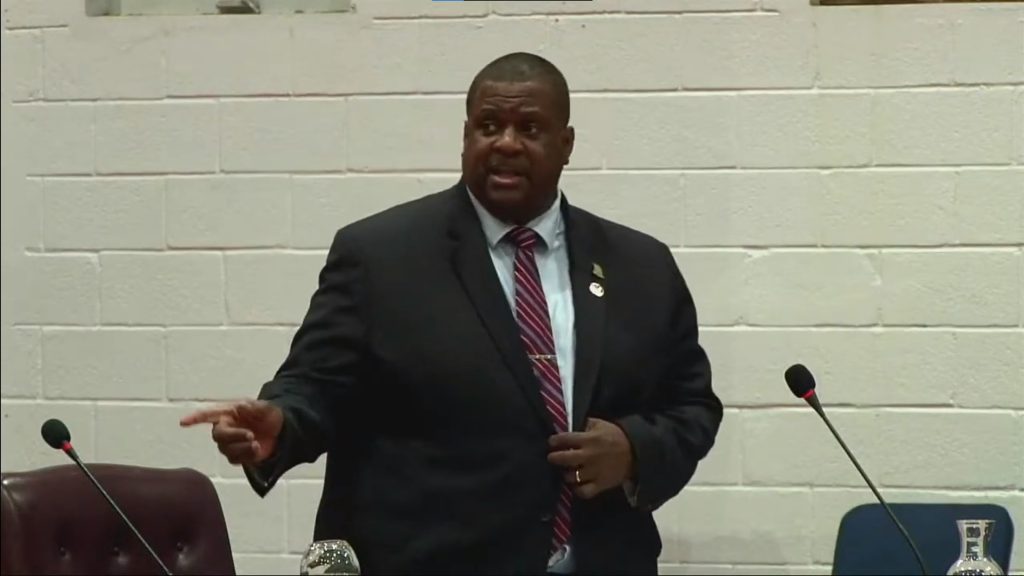 Premier Andrew Fahie said recently in the House of Assembly the Whistleblower Act 2021 is one of many planned measures that aim to ensure the transparent governance of the Virgin Islands. (Screenshot: FACEBOOK)

Legislation protecting people who sound the alarm about corruption and other illegal activity in the public or private sector made it to the House of Assembly this month, and the proposed law has now been published.

When presenting the bill for a first reading on March 4, Premier Andrew Fahie said it is one of many planned measures that aim to ensure the transparent governance of the Virgin Islands, a hot-button issue as the United Kingdom carries out a commission of inquiry here.

Under the proposed law, Mr. Fahie explained, whistleblowers would receive anonymity, protection, and potentially a reward for providing useful evidence.

The premier also said that people who provide inadequate evidence may face penalties, but no such penalties were detailed in the bill Gazetted on March 12.

Later, he repeated the claim.

“If there is evidence, you get paid for the information because you have done your civic duty of making sure that transparency continues, and good governance; but if the evidence is shown to be flawed and of no basis, you will pay for anything that has not yielded any kind of substantial worth to move forward with,” he said.

The premier’s account, however, appears misleading: The current iteration of the bill does not specify any potential financial penalties or jail time for giving information that is not “substantial.”

The bill also outlines how a “Whistleblower Reward Fund” would be established and financed. The fund, it states, would consist of “voluntary contributions” and money allocated by the HOA.

“The object of the fund is to provide funds for the payment of monetary rewards to whistleblowers,” the bill states.

Whistleblowers could receive up to 10 percent of the money recovered from an investigation sparked by their disclosure, or an amount determined by the governor after consultation with Cabinet, according to the proposed law.

Additionally, the bill lists situations where someone may wish to report information under the Whistleblowers Act: a crime was or may be committed; someone is breaking a law that imposes on the person; a miscarriage of justice has been or might be happening; waste, misappropriation, or mismanagement of public resources is happening at an institution; the environment has been or will be degraded; or the health or safety of a person or community is at risk.

The text specifies that the information-giver must have “reasonable cause” to believe the evidence provided is true.

Under the bill, people would be protected while making such a disclosure if it is made in “good faith;” if they reasonably believe it to be “substantially true;” and if the proper authorities are notified.

“A whistleblower shall not be subjected to victimisation by the employer of the whistleblower or by a fellow employee or by any other person because a disclosure has been made,” the bill adds. Anyone who believes they have been victimised would be able to make a complaint to the complaints commissioner, and eventually bring action in the High Court.

Also under the proposed law, whistleblowers would be able to bring their claim to any of several authorities, including their employers, the governor, premier, attorney general, director of public prosecutions, auditor general, complaints commissioner, head of a recognised religious body, or a member of the House of Assembly.

When deciding who to approach, the bill states that sources should take into account their fear of retribution like being fired or harassed; concern of relevant evidence being concealed or destroyed; the seriousness of the impropriety; and “that the person to whom the disclosure is made will not frustrate the objective.”

“Investigation undertaken in respect of impropriety shall be carried out as expeditiously as possible and shall in any event be completed within 60 days of receipt of the disclosure or directives to undertake the investigation,” according to the bill.

Under the proposed law, anyone who conducts an investigation and conceals evidence would face a maximum five-year prison sentence.

The investigator would be empowered to seek support from the courts to prevent witness intimidation or to preserve evidence if there is a risk of it being destroyed. After an investigation, a final report would be submitted to the attorney general, according to the bill.

If someone has supplied evidence and believes their life, property or family is in danger because of it, the proposed law would allow them to request police protection.

The HOA will debate the bill when it comes for a second reading and can then make amendments in closed-door committee that would be publicised after the governor assents.