Under fire, finance industry pushes back

The Virgin Islands financial services industry generated $196 million in revenue for the territory last year, up from $189.75 million the previous year, and kept the economy largely afloat during …

END_OF_DOCUMENT_TOKEN_TO_BE_REPLACED 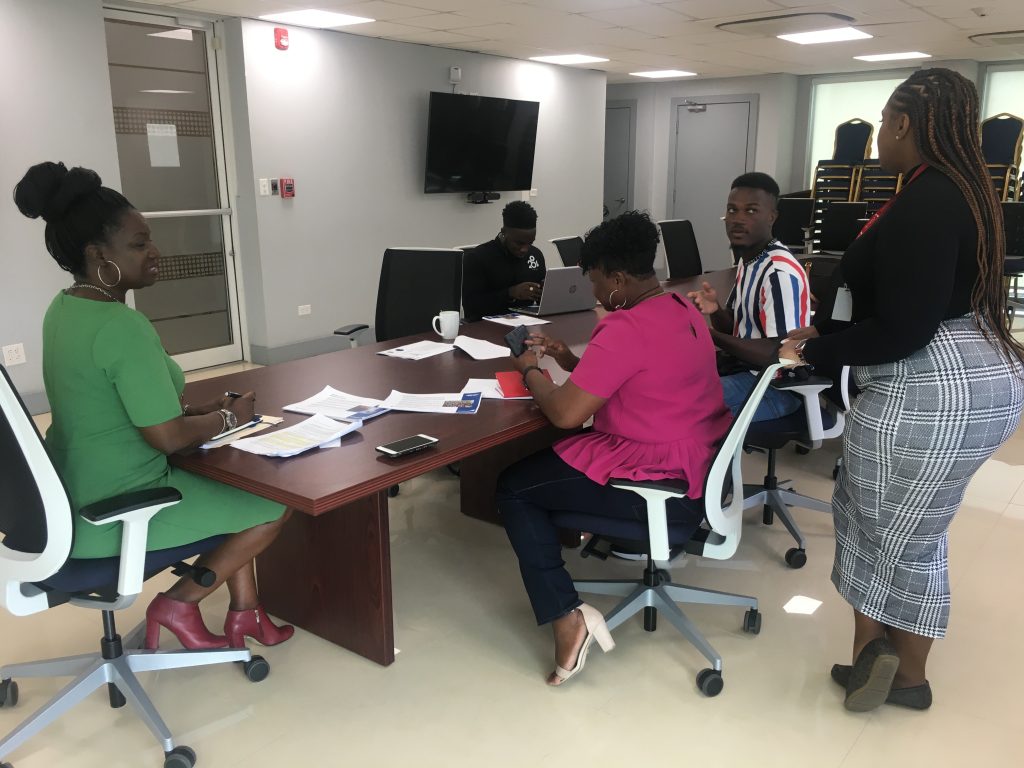 BVI Finance CEO Elise Donovan, left, speaks with reporters about the state of the financial services industry during a recent press briefing about the BVI 360 campaign. (Photo: CLAIRE SHEFCHIK)

The Virgin Islands financial services industry generated $196 million in revenue for the territory last year, up from $189.75 million the previous year, and kept the economy largely afloat during the Covid-19 pandemic, BVI Finance CEO Elise Donovan said during a recent press briefing held as part of a new informational campaign called BVI 360.

The “fact-based content series” — which includes reports and other publications — is designed in large part to highlight the industry’s importance to the territory and to counter negative media coverage, she explained.

In recent years, she acknowledged, such media coverage has included reports about wide-ranging issues: high-profile leaks that exposed the secret owners of VI-based companies; the recent inquiry that found a high probability of government corruption; and the arrest of former Premier Andrew Fahie on drug and money-laundering conspiracy charges in Miami.

“With all the things that have happened, we have a position that our financial services industry operates autonomously and independently and was not impacted or affected by what is going on with the COI and the Miami situation,” she explained during the July 29 briefing. “But we wanted to ensure that we keep that message positively throughout the world that our financial services industry operates autonomously, and that it continues to operate with robust regulations and is very much involved in the fight against financial crime globally.”

The BVI 360 series was commissioned from Pragmatic Advisory, an independent strategy and economics research consultancy firm based in the United Kingdom, Ms. Donovan said.

The series focuses on portraying the industry as stable, regulated, tax transparent, internationally compliant, and a key actor in driving global value — a portrayal that she said often isn’t reflected in the media.

“We are doing legitimate business, high-value businesses, and high-value transactions. We are doing big business and we are not just doing shell companies,” Ms. Donovan said. “We are doing important business that facilitates globalisation as a concept.”

The campaign, she added, also highlights successes, such as Harneys’ work during the pandemic advising a Latin American company on a $1.1 billion acquisition and the government’s more recent freezing of some $400 million worth of Russian assets under global sanctions enacted in the wake of the Ukraine invasion.

Additionally, the campaign stresses the industry’s importance to the VI economy, she said, noting that the territory’s gross domestic product grew by 2.2 percent last year, putting it ahead of the United Kingdom. This year, she added, government projections predict 1.8 percent growth in GDP.

This growth “was a result of the financial services still continuing to work and to do remote business even through lockdown to operate effectively and efficiently to allow the economy to still thrive despite what was happening in the BVI in relation to the pandemic and around the globe,” she said.

Acknowledging that the territory remains grey-listed by the European Union and blacklisted by France, the director said the VI’s International Tax Authority is helping lead efforts to get off both lists.

“Calls for greater tax transparency have led to major global tax initiatives to ensure that companies and individuals pay their fair share of taxes,” she said. “The BVI 360 series seeks to correct the inaccuracy in which the BVI is often referred to as a tax haven when it is, in fact, one of the most tax transparent jurisdictions in the world because of all the global tax initiatives it has signed on to over the last 20 years.”

Ms. Donovan added that the VI will be subject to no less than eight different reviews in the coming years, some of which will likely determine whether it stays on or off various blacklists.

Meanwhile, the House of Assembly has continued to pass legislation, including the BVI Business Companies (Amendment) Act 2022, designed to keep the territory in line with global standards, she said.

Next year, at the UK’s urging, the VI is also scheduled to implement a public register of the beneficial owners of companies registered here.

“The government committed to carrying out the public register of beneficial ownership in line with the global standards,” she said. “So that is still on train to happen, and I think the framework that was put in the amendments is to facilitate the Financial Services Commission and the government and all the authorities who are working to determine what that is going to look like. And so I guess when they reach that stage, they will let us know what it’s going to look like, but it’s in line to value our commitment to carry out what was passed in that [UK] bill in 2018.”