As the Covid-19 crisis has decimated the economy in recent months, leaders have sought to counter the dismal outlook while rolling out more than $10 million worth of contracts under …

END_OF_DOCUMENT_TOKEN_TO_BE_REPLACED 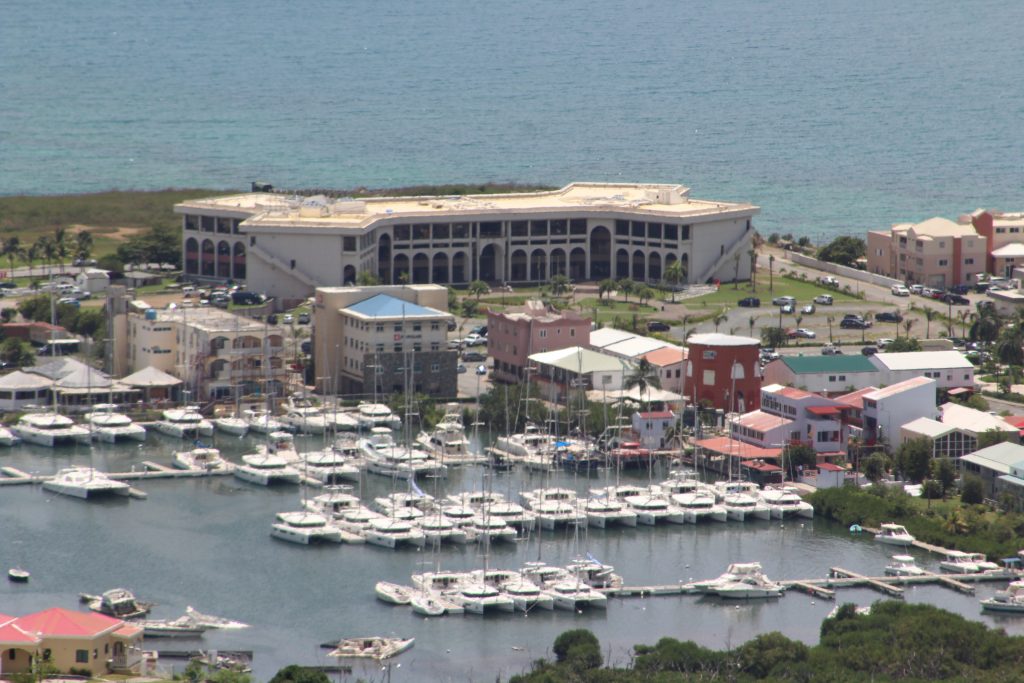 In the three years since Hurricane Irma devastated the territory, the public sector recovery still has a long way to go. (Photo: ZARRIN TASNIM AHMED)

As the Covid-19 crisis has decimated the economy in recent months, leaders have sought to counter the dismal outlook while rolling out more than $10 million worth of contracts under the $65.5 million recovery loan that legislators obtained from the Caribbean Development Bank about three months after Hurricane Irma.

“Today this contract signing signals yet another victory for the BVI as we steadily move forward with our hurricane recovery efforts with $40 million worth of construction projects under the [Recovery and Development Agency],” Premier Andrew Fahie announced on July 9 during a contract ceremony for roadworks in Great Mountain.

The promised $40 million, leaders said, will finance recovery projects over the next 18 to 24 months, providing a much-needed economic boost.

But their announcements told only part of the story.

Although the long-delayed CDB tranche is by far the RDA’s largest yet, the agency still appears to be deeply underfunded for the many projects it is charged with completing as part of a public-sector recovery that initially was estimated to cost $721 million.

Though leaders have been tight-lipped on specifics, their intermittent updates suggest that the government may have accessed little more than $100 million for the recovery from loans, grants, insurance payouts and donations.

And the RDA — apparently hamstrung by the funding shortfall — has reported spending only about $17 million on projects so far, a figure that includes the recent surge in CDB-funded contracts.

It is unclear where government might access further funding beyond the CDB loan. The main planned source — a £300 million loan guarantee from the United Kingdom — has not materialised, and leaders have not announced a comparable alternative.

In the meantime, the effects of the delays are tangible: No public libraries are open; high schoolers may soon return to class in temporary facilities; community centres remain unrepaired; housing efforts have stalled before all qualified applicants got help; derelict boats still litter territorial waters; and work has not begun on major recovery projects like the National Emergency Operations Centre, the West End ferry terminal and schools.

Premier Andrew Fahie has defended his government’s efforts and blamed the previous administration for the delays. But he did not respond to interview requests for this article, and acting RDA CEO Anthony McMaster declined to give an interview without Mr. Fahie present.

The RDA was established in early 2018 primarily to manage major public-sector recovery projects funded by the UK loan guarantee and other sources.

The original Recovery to Development Plan, which the HOA adopted in October 2018 with Mr. Fahie’s approval, projected a $721 million price tag for RDA projects.

After Mr. Fahie came to power in last year’s election, however, he publicly criticised the terms of the loan guarantee, and his government subsequently submitted a revised RDP to the UK, which took effect after legislators approved it in June of this year.

The new 33-page plan — which was significantly downsized from the original 116-page document — estimates financing needs for RDA projects at $186.9 million over four years instead of $721 million over seven to ten years.

Leaders have not explained how they plan to complete the projects that didn’t make the cut for inclusion in the new RDP, but Governor Gus Jaspert said Friday that the “drastically” amended document focuses more on rebuilding rather than development, and that the VI should “never be anything less than ambitious” in developing “our public service [and] public buildings to a level that is world class.”

The scaling down of projects led to the resignation of former RDA CEO Paul Bayly in March and the appointment of Mr. McMaster. 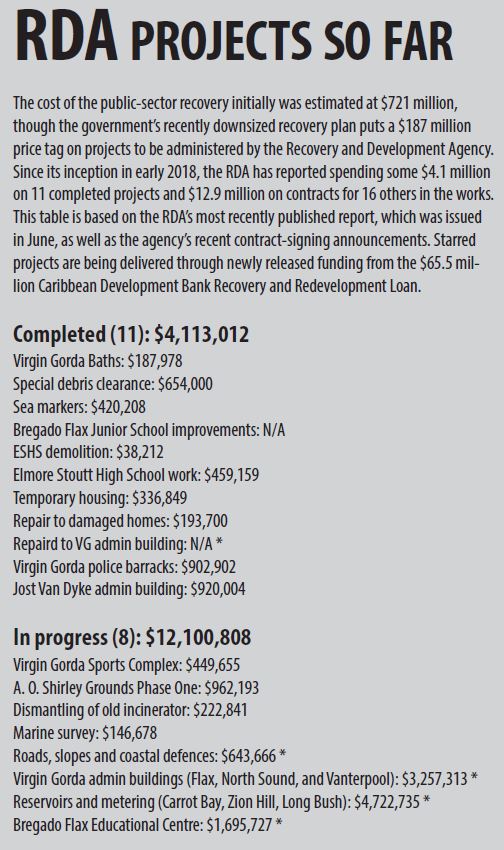 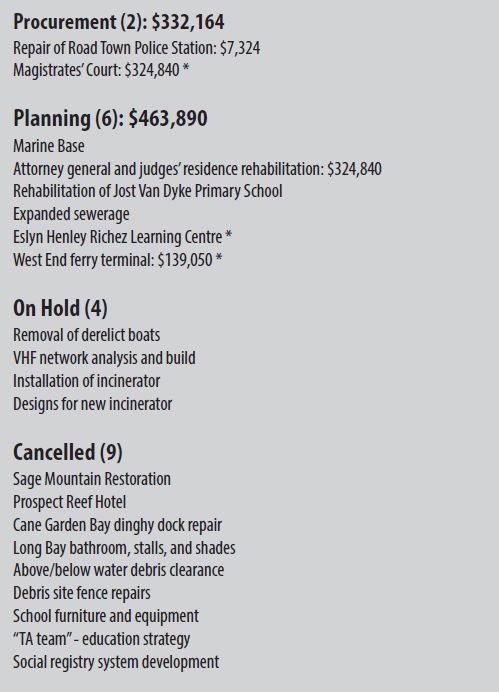 Even against the downscaled benchmarks in the new recovery plan, the RDA has struggled to carry out its mandate. To date, it has reported completing just 11 projects worth about $4.1 million, and spending about $12.9 million on contracts for 16 other projects in progress.

And despite claims that the agency has spent up to $400,000 in monthly operating costs — which RDA officials have not confirmed or denied — it has reported completing only seven projects since last September, costing about $1.6 million.

The reason for the slow progress appears to boil down to a lack of funding. Though the RDA has been tightlipped about its finances in the past, it published a report in June that includes a breakdown of contracted public funding and project grants.

The $49 million figure suggests that even with the CDB funding, the RDA hasn’t accessed even a third of the $186.9 million cost of recovery estimated under the government’s downscaled recovery strategy.

However, it is unclear if other money will be forthcoming. Originally, the bulk of the recovery money was to be sourced through the £300 million loan guarantee backed by the UK.

But after publicly criticising the guarantee’s terms last year, Mr. Fahie has provided few updates on the negotiation process that he said is under way.

Additionally, in a recent move to offset revenue losses due to the Covid-19 pandemic, government adjusted its 2020 budget and pulled $16 million that had been allocated for the RDA, which mainly will be redirected to the Ministry of Transportation, Works and Utilities.

The government is also handling at least one major recovery project without the RDA’s oversight. Repairs to the Ralph T. O’Neal Administration Complex fell under the wing of the TWU Ministry last October, and last month officials announced after delays that work would accelerate following the signing of a $2 million contract for windows and doors.

Mr. Fahie also has announced other recovery-related efforts in recent months, though many of the details remain unclear.

Besides the CDB-funded projects, he said funds had been secured for the East End/Long Look Sewerage Project with the help of the Telecommunications Regulatory Commission and the BVI Ports Authority. Additionally, the building of 40 “affordable” homes in Joes Hill is planned, with $17 million to be drawn from a pandemic stimulus package funded by a $40 million grant from the Social Security Board. Other works the premier promised in August include paving of public roads in Anegada and Jost Van Dyke; construction of a new multi-purpose port facility building at Jost Van Dyke; and resurfacing and repairs of roads in East End.

In the face of the recovery delays, public officers have had to remain patient. In interviews with the Beacon, Chief Fire Officer Zebalon McLean and Police Commissioner Michael Matthews acknowledged that a full recovery will take time.

“We have to be realistic,” Mr. Matthews said. “We haven’t got a bottomless pit of money.”

Mr. Matthews and other officers moved back into the Police Headquarters across from the Road Town ferry terminal about three months ago after being housed in Rite Way Supermarket in Pasea since the hurricanes.

The headquarters, however, still need furnishings, which were delayed due to the pandemic, and work remains to be done on the stations in Road Town, Cane Garden Bay, Virgin Gorda and Anegada.

However, the West End station and the Jost Van Dyke station (housed inside the Albert H. Chinnery Administration Building) were refurbished and fully functional by August of last year.

“All of those locations, it wasn’t just a rebuild of what was there,” Mr. Matthews said. “It was really functional for what’s needed in the 21st Century.”

He added that the police force also replaced about 70 percent of its vehicles since the hurricanes.

The new vehicles had to fulfill two major criteria, he said: be able to withstand rough terrain in case of a major storm, and be highly visible to the public.

The police marine base, a project currently under the RDA, still has damages and is “not really fit for purpose,” he added.

Eventually, a new base will also house customs and immigration officers, Mr. Matthews said, adding that another base is needed on a sister island.

A rough timeline for completion of the Tortola base is sometime in 2022, he said.

Mr. Matthews acknowledged that everything can’t be fixed at once — especially with many projects delayed due to the pandemic restrictions — and that priorities need to be set to address all the damage caused by the hurricanes.

Though there is no foolproof “solution” to a major hurricane, he added, the new headquarters’ windows have been replaced with tougher glass and hurricane shutters.

Across town, however, the Road Town Fire Station still awaits its hurricane shutters and barracks for its officers.

Mr. McLean said that only the first of three phases of needed repairs has been completed, but the project has been making progress.

“We’re not quite finished with all three phases, but it’s a lot more comfortable,” he said. “So we’re seeing the light at the end of the tunnel.”

Providing suitable barracks for the officers remains an important goal for the station, which operates on a 24-hour basis.

Mr. McLean stressed the importance of giving the officers a place to rest and relax.

“When you demand that level of commitment from your officers, you want to be able to put them in the best position possible to carry out your orders,” he said. “You can’t give someone a task without giving them the tools.”

Though he said he understands that financing repairs may be difficult, he added that he is “not happy” with the time the project has taken.

There’s still work to be done on all the fire stations, Mr. McLean said, adding that most have been improved over the last three years.

Along with a $650,000 grant from the Community Disaster Risk Reduction Fund managed by the CDB, Rotary clubs donated more than $70,000 toward the community project.