A shipment containing critical medical supplies for the fight against Covid-19 was released by United States Customs and Border Protection on Friday, and it arrived in the Virgin Islands on …

END_OF_DOCUMENT_TOKEN_TO_BE_REPLACED 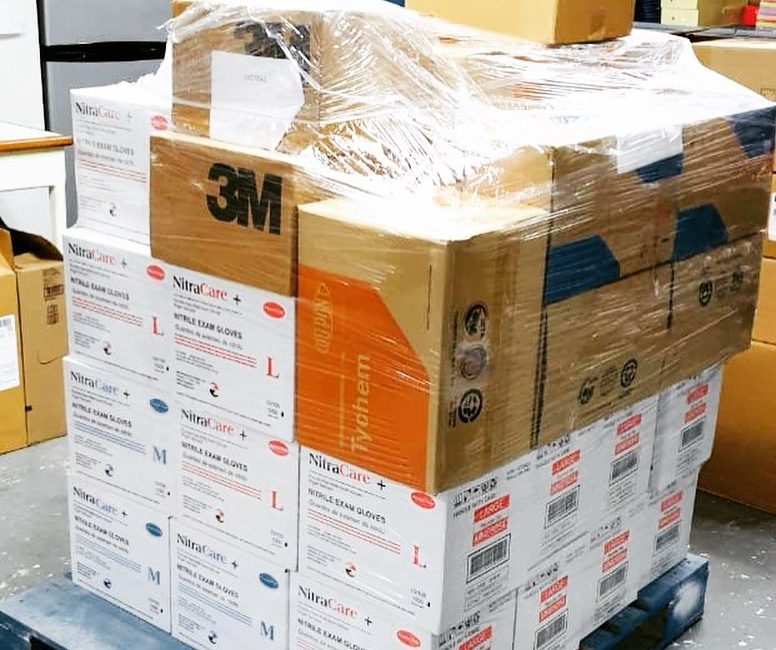 The government shared a photo of the shipment that arrived from the United States, which includes critical supplies of personal protective equipment to be used by the BVI Health Services Authority. (Photo: ZARRIN TASNIM AHMED)

A shipment containing critical medical supplies for the fight against Covid-19 was released by United States Customs and Border Protection on Friday, and it arrived in the Virgin Islands on Monday, officials said.

“I am pleased to report that the medical supplies have now been released by the US,” Governor Gus Jaspert said on Friday.“I’d like to say thank you to our US colleagues in Bridgetown and London, and the BVI Health Services Authority, who have worked together to achieve this outcome.”

A picture of the shipment was featured on the government’s Facebook page when it arrived in the territory.

The VI was among a growing list of jurisdictions affected by US President Donald Trump’s controversial decision to ban the export of certain medical equipment designed to fight the Covid-19 pandemic, effectively blocking much-needed shipments to struggling nations.

Health and Social Development Minister Carvin Malone first confirmed the seizure of equipment destined for the VI on April 10, and on April 13 he said the government has sought the United Kingdom’s assistance to retrieve the supplies and to help government keep an open channel to purchase medical supplies from the US.

“The Governor’s Office is dealing with this,” he told Caribupdate News Channel, which is based in Hollywood, Florida. “I have no updated report on this, but I am assured that this will be handled amicably.”

At the time, the minister added that he had reported the situation to Mr. Jaspert, asking him to find “diplomatic channels” to retrieve the supplies, which he said included N95 masks, gloves and gowns.

“[The equipment is] not much in the whole scheme of things, but we want to make sure we have a clear path of purchasing those supplies through the United States,”he said. “We would be grateful if this could be handled, and handled effectively, by the US government and the UK government.”

In response, Mr. Jaspert confirmed the request and resolved the matter.

“We need these items immediately for domestic use: We have to have them,” he said at a press conference that day.

Many have argued that the move contradicted the March 26 decision of Mr. Trump and other G20 world leaders to ensure the flow of medical supplies across borders.

In addition to the VI, the Bahamas, the Cayman Islands and Barbados have had containers filled with PPE purchased from US vendors blocked by US Customs and Border Protection, according to The Miami Herald.

Barbados Health Minister Jeffrey Bostic told the nation that a shipment of 20 ventilators purchased by a philanthropist was blocked from entering the country, which has tallied 72 confirmed Covid-19 cases and four deaths, the Herald reported March 11.

Though the nation reached out to the US embassy, shipments had not been released at the time of the report. The US Embassy in Barbados, however, issued a statement on April 15 that stated it was working with partners to “ensure the flow of vital medical supplies” across borders and “will resolve disruptions to the global supply chains.”

“False narratives and unfounded allegations regarding the US response to Covid-19 have sought to disrupt the strong relationships the United States enjoys with Barbados and the countries of the Eastern Caribbean,” the statement read. “The United States stands with its Caribbean neighbours, and we will continue to do so until and after Covid-19 is defeated.”

The US also temporarily blocked a shipment to the Cayman Islands of eight ventilators and 50,000 masks, according to the Herald. On March 10, however, Premier Alden McLaughlin said the US released the shipment after Cayman received support from the US ambassador to Jamaica.

Asked about seizures of Caribbean shipments during a March 10 press conference, Mr. Trump changed the subject.

A reporter asked, “Officials in Latin American and Caribbean nations — Bahamas and Cayman Islands — have been saying that US authorities are blocking the shipment of PPE in certain cases and I’m wondering if you can speak to that.”

Mr. Trump responded, “What we’ve been doing: We have a tremendous force out there, a Naval force, and we’re blocking the shipment of drugs. … We’re not blocking: What we’re doing is making sure — we don’t want drugs in our country.”

The president then spent the next few minutes talking about human trafficking rather than answering the question.