Power52, a solar installation company based in Baltimore, has been awarded a contract to construct a four-and-a-half-acre hybrid solar and battery system on Anegada as part of the government’s larger …

END_OF_DOCUMENT_TOKEN_TO_BE_REPLACED 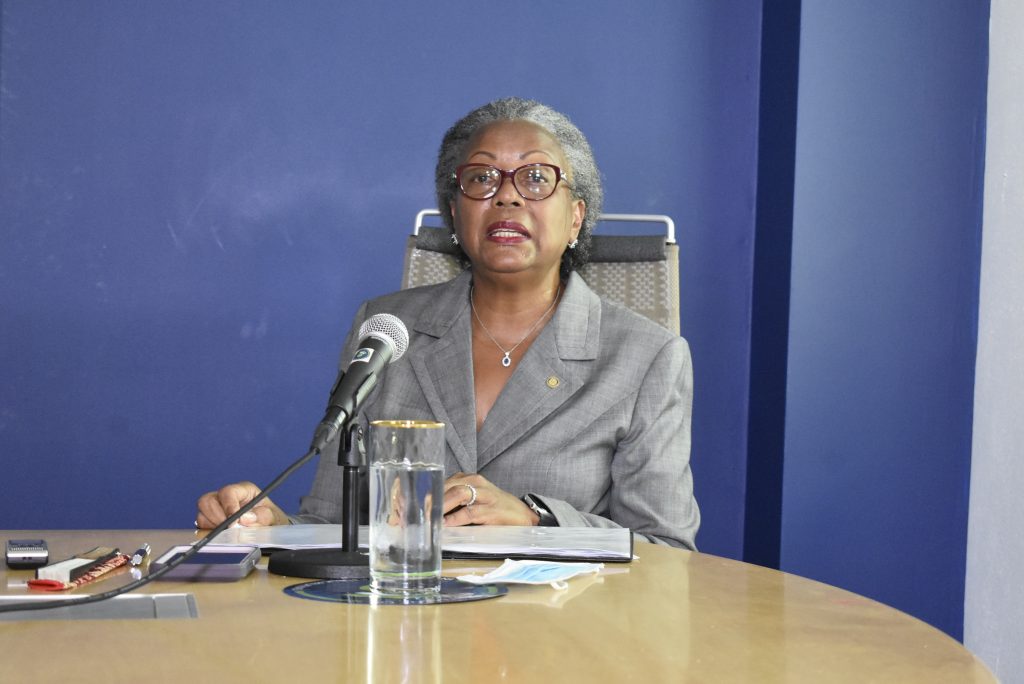 At a Friday press conference, Rosemarie Flax, chairwoman of the British Virgin Islands Electricity Corporation board of directors, announced that Power-52, a United States solar firm, has been awarded the contract to build a solar array on Anegada. (Photo: JOEY WALDINGER)

Power52, a solar installation company based in Baltimore, has been awarded a contract to construct a four-and-a-half-acre hybrid solar and battery system on Anegada as part of the government’s larger vision of switching to renewable energy.

The firm, which has partnered with German energy company SMA Sunbelt Energy GmBH to develop the project, beat out four other bidders to win the contract after a tender-evaluation process determined that its system would offset the most fossil fuels while costing the least to build, BVI Electricity Corporation General Manager LeroyAbraham said at a Friday press conference.

“Their diesel offset for the price given was the right recipe,” Mr. Abraham said.

Like the other bidders, Power 52 submitted proposals for two scenarios. In the first, it would build the system in exchange for $4,687,944.72. In the other, it would construct the grid at its own expense and operate it for a certain period while selling the energy back to the BVIEC for $0.22 per kilowatt hour.

The BVIEC is “currently deciding” which option to pursue, Mr. Abraham said Tuesday.

Due to the uncertainty caused by the coronavirus, there is currently no expected date for when works will begin, but in the interim Power52 is making all the preparations that it can, Mr.Abraham added.

Anegada’s solar field, which is slated to produce some two megawatts of energy, will be situated adjacent to the diesel power station currently providing the sister island’s electricity, Mr. Abraham said.

In January, Mr. Abraham said that completion of this project would bring the island “very close” to achieving its 2013 goal of producing 80 percent of its power by renewable means by 2021, a hall-mark of the territory’s ten-year energy vision.

To carry out the tender process and choose a company, BVIEC enlisted the help of DNV GL, a Norwegian consulting firm that has produced energy reports for the territory in the past, and that was retained by the BVIEC after completing a tender process for another consulting job in 2013, Mr. Abraham said.

For the Anegada tendering process, DNV GL helped design the project requirements, offered support to bidding companies, and evaluated their proposals, said Rosemarie Flax, chairwoman of the BVIEC board of directors.

All companies that bid for the project had to pay a $10,000 fee, Mr. Abraham said, though he did not explain why.

To assess the bids received, DNV GL graded the submissions out of a total of 100 points, which were awarded based on criteria that included qualifications and experience, technical proposal, contractual cost, and diesel offset, Ms. Flax said.

Each of the five companies that bid for the project outlined its vision in two scenarios: an “engineering, procurement, construction” scenario, in which it would design the system, procure the various components, and install the completed project under one contract; and a “power purchase agreement” scenario, wherein the contracted company would design and construct the project on BVIEC’s property and then operate the facility and sell the generated power back to the utility.

The BVIEC did not list the PPA bids in its April announcement, but Ms. Flax said Friday that Power52’s offer to sell electricity at $0.22 per kilowatt hour was $0.14 lower than its closest competitor.

“Based on the overwhelming results of the bid evaluation process in favour of Power52 … the board of directors made a decision to award the Anegada Hybrid Renewable Energy and Battery Energy Storage System Project to Power 52,” she added.

Construction of the solar array also will help ease the BVIEC’s financial woes lingering from the hurricanes of 2017, according to the chairwoman.

Because Anegada is not connected to BVIEC’s grid, the revenue derived from selling power to the sister island’s residents does not cover the costs of production, so the BVIEC subsidises its operations, Ms. Flax said.

“This is also one further reason why BVIEC is looking forward to the swift execution and completion of the Anegada project, which will bring much needed financial relief to the organisation,” she added.

This contract is not Power52’s first foray into the VI. In January, firm co-founders Rob Wallace and National Football League Hall-of-Famer Ray Lewis, both Baltimore natives, came to the territory to sign a memorandum of understanding with H. Lavity Stoutt Community College. Working with Power52’s non-profit arm, the partners plan to establish a programme that would train students to becoming certified solar installation professionals.

Classes in the programme, however, have yet to commence.