Local News > US seeks to detain Fahie, Maynard for pre-trial

US seeks to detain Fahie, Maynard for pre-trial

In advance of a pre-trial detention hearing for Premier Andrew Fahie and BVI Ports Authority Managing Director Oleanvine Maynard set for Wednesday in a Miami court, prosecutors argued that the …

END_OF_DOCUMENT_TOKEN_TO_BE_REPLACED 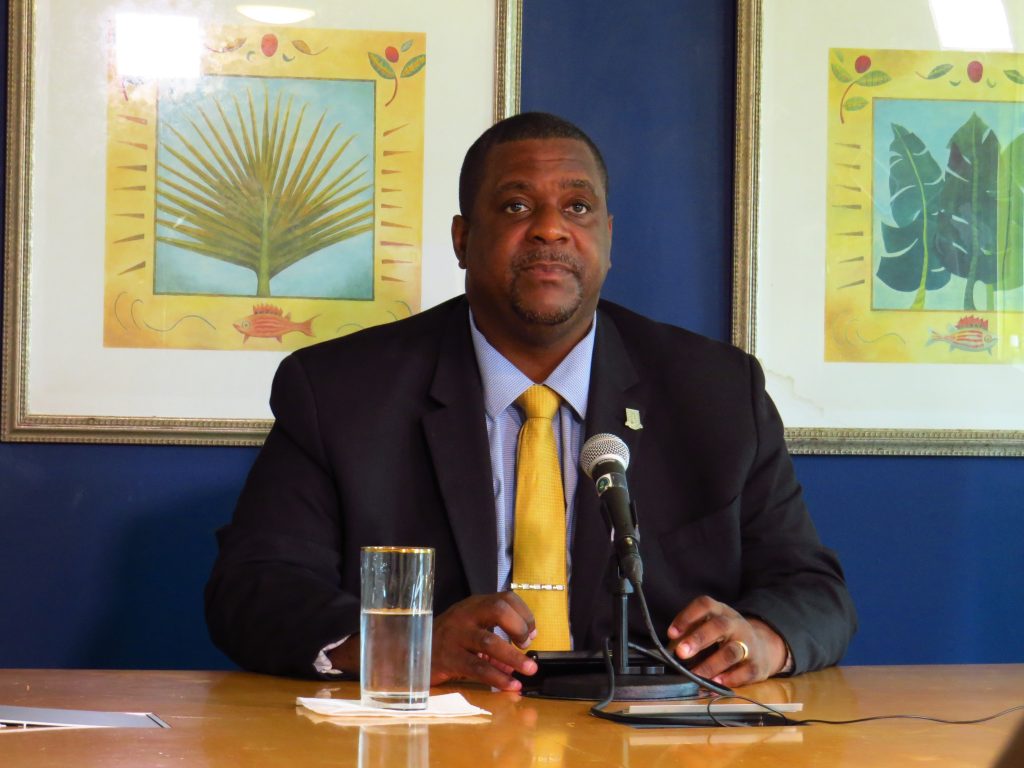 United States prosecutors are saying Premier Andrew Fahie and BVI Ports Authority Managing Director Oleanvine Maynard each face a 10-year minimum sentence if convicted on drug trafficking conspiracy, and estimated sentencing guidelines range from about 19 to 24 years, according to a filing by submitted this morning in advance of a pre-trial detention hearing. For money laundering conspiracy, they could face sentencing guidelines ranging from 24 years to life. (File photo: DANA KAMPA)

In advance of a pre-trial detention hearing for Premier Andrew Fahie and BVI Ports Authority Managing Director Oleanvine Maynard set for Wednesday in a Miami court, prosecutors argued that the pair should remain in detention based on their flight risk and “danger to the community.”

A motion filed Wednesday by United States Attorney Juan Gonzalez focused largely on the premier’s alleged conversations with an undercover source posing as a drug trafficker seeking to make a connection to facilitate the movement of cocaine from Colombia through the Virgin Islands to the United States.

When the source warned Mr. Fahie not to discuss drug business over the phone, the premier allegedly responded by touting his experience in such dealings, according to the motion.

“He told the [confidential source] that when people provided him with large amounts of cash, and that cash came wrapped in bank wrappers, he would always remove, tear up, and discard the wrappers because the banks could trace the currency based on the stamps or codes on the wrappers,” the document states. “Impressed by Fahie’s criminal acumen, the CS asked, ‘So this is not your first rodeo right, I can tell … .’ Fahie responded, ‘“Oh no no no, not my first rodeo at all. Not my first rodeo at all.”

Also on Wednesday, Mr. Fahie’s attorney Theresa Van Vliet filed documents in support of her earlier claim on Monday that he is immune from arrest and detention in the US by virtue of his position as VI premier.

Her Wednesday filings include a May 3 “diplomatic note” to the US Office of International Affairs from the Premier’s Office noting that Mr. Fahie is the VI premier and requesting his “immediate return and free passage” back to the territory.

The letter adds that Mr. Fahie had such immunity at the time of his Miami arrest on April 28 and he has not waived it.

The filing also includes an April 23 “protocol request” relating to Mr. Fahie’s “official travel to Miami,” and a 2002 judgment from the International Criminal Court about an arrest warrant involving an official from the Republic of the Congo.

However, US attorney Juan Antonio Gonzalez is arguing the Mr. Fahie is not entitled to head of state or government immunity because the territory is not a sovereign state in the eyes of the US government.

“Accordingly, the defendant does not and cannot enjoy immunity as a head of state or government,” Mr. Gonzalez wrote in a Tuesday filing. “Nor does the defendant’s ‘notice’ do anything to establish an entitlement to immunity for the defendant. In fact, that ‘notice’ has no legal effect at all.”

He also argued in the Wednesday motion for pre-trial detention that the US Bail Reform Act empowers federal courts to order a defendant’s detention pending trial “if the court determines that the defendant is either a danger to the community or a risk of flight.”

Mr. Gonzalez stated that Mr. Fahie should be detained based on his alleged violation of the Controlled Substances Import and Export Act.

“Through the course of this conspiracy, it has become clear that Fahie is engaged in corruption and criminal activity at the highest levels,” Mr. Gonzalez wrote. “He has accepted bribes, he has agreed to pay bribes, he has conspired to import thousands of kilograms of a dangerous controlled substance, he has admitted to working with known drug dealers in the BVI, and he has expressed a willingness to inquire about the acquisition of firearms from a Senegalese contact – on behalf of the Sinaloa Cartel.”

‘Danger to the community’

He continued, “His release would result in a danger to the community by allowing for continued drug trafficking from the BVI to the United States, and the ongoing protection of criminal activity provided by Fahie. Not only would Fahie himself serve as a danger to the community, but his freedom in society would allow for the unfettered criminal activity of Fahie’s associates to continue.”

Regarding his flight risk, the prosecution said, “Fahie presents a particularly concerning risk of flight because he has a compelling reason to flee, he has a demonstrated disregard for the rule of law, he has the connections and ability to flee, and he has extremely limited connections to the Southern District of Florida.”

“Through this investigation, it has become clear that Fahie is corrupt to the core,” he wrote. “His actions lead to only one conclusion: that Fahie believes he is above the law.”

He made similar claims about Ms. Maynard’s risk, stating, “She is an admitted associate of a group of criminals in the BVI who claim to be Hezbollah operatives involved in criminal activity on Tortola. Maynard’s planned drug distribution, and the violence it would inevitably create, demonstrate why Maynard is such a danger to the community, and should be detained on that basis.”