Crime > US Coast Guard seizes 1,700 kilograms of cocaine near Anegada

US Coast Guard seizes 1,700 kilograms of cocaine near Anegada

During a nighttime operation on Aug. 27, members of the United States Coast Guard seized about 1,700 kilograms of cocaine with a “wholesale value” of about $51 million off the …

END_OF_DOCUMENT_TOKEN_TO_BE_REPLACED 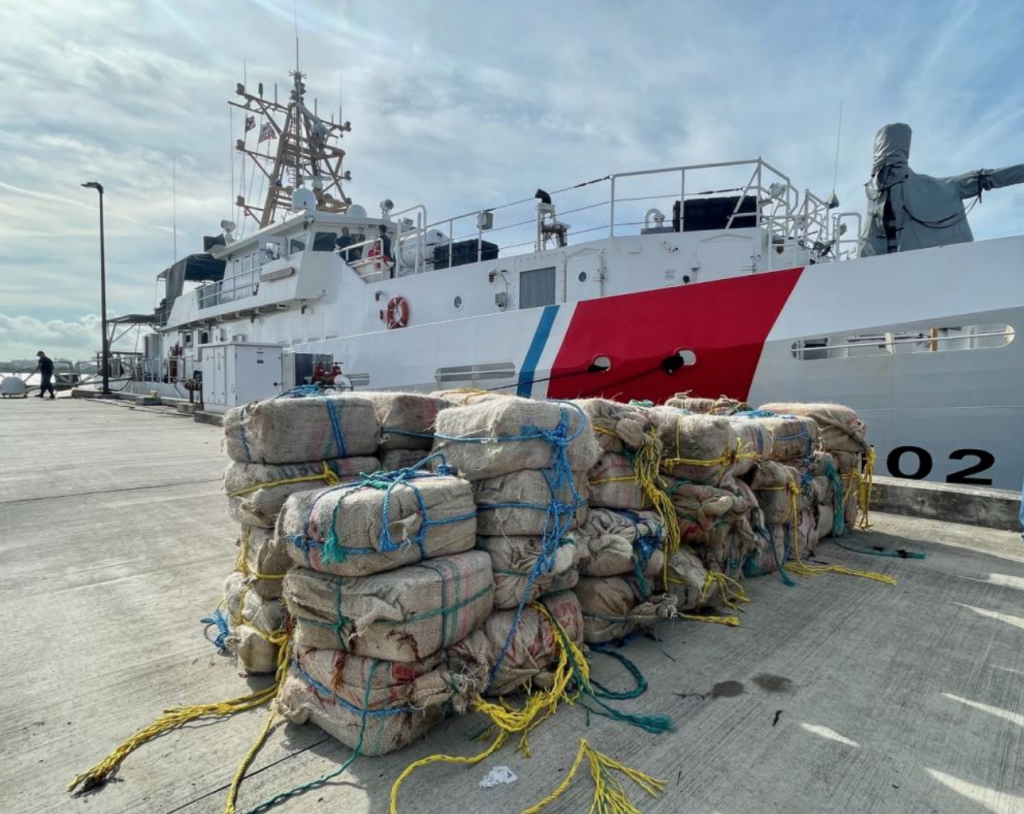 Following a nighttime operation off Anegada on Aug. 27, United States Coast Guard officers aboard the cutter Richard Etheridge recovered about 1,700 kilograms of cocaine after it was tossed of a speedboat, they announced Friday. (Photo: RICARDO CASTRODAD/US COAST GUARD)

During a nighttime operation on Aug. 27, members of the United States Coast Guard seized about 1,700 kilograms of cocaine with a “wholesale value” of about $51 million off the coast of Anegada, according to a Friday USCG press release.

No one was arrested as part of the joint effort between the USCG and Virgin Islands police officers, as the smugglers fled the area after dropping at least 57 bales of cocaine into the sea, according to the USCG.

“Despite the challenging sea state conditions and thanks to the close collaboration and coordination with our Royal Virgin Islands Police partners, our crews did an outstanding job in disrupting a major shipment of cocaine and keeping it from ever reaching the streets,” said Captain Gregory Magee, USCG Sector San Juan commander.

The nighttime chase began after officers aboard the USCG ship Richard Etheridge, a 157-foot fast response cutter home-ported in Miami, were alerted to a sighting of a speedboat in the waters northeast of the VI, the USCG stated.

USCG officers in San Juan then dispatched an aircraft to the speedboat, while the Richard Etheridge followed behind, the USCG stated.

VI police were mum on the seizure until Monday, when Police Information Officer Diane Drayton stated that the USCG “immediately contacted” the RVIPF Intelligence Unit when it learned of the vessel, and “the Marine Unit was discharged for interceptive actions.”

Officers aboard the USCG cutter maintained communication with VI police officers during the chase, the US agency stated.

After the ship closed in on the smugglers, who “proceeded to jettison their cargo and flee the area at high speed,” the helicopter crew helped the officers aboard the cutter locate the cargo, the USCG stated.

The 57 bales recovered by the Richard Etheridge crew eventually tested positive for cocaine, according to the US agency.

VI Police Commissioner Mark Collins said such joint operations between this territory and other jurisdictions in the Caribbean are key to disrupting the flow of narcotics in the region.

“We are happy to be a part of both the efforts of both Caribbean Border Interagency Group and the Caribbean Corridor Strike Force in detecting and intercepting traffickers, and do intend to continue to work closely with these partners,” Mr. Collins said.

Last week’s drug bust comes less than a year after the biggest bust in VI history, which resulted in the arrest of police officer Darren Davis and his brother, Liston Davis, in connection to the seizure of 2.3 tonnes of cocaine valued at some $250 million from Darren Davis’ property in Balsam Ghut, police said at the time.

Another police officer —Emile Jimenez — also has been charged in relation to the bust.

That seizure, which officials said was worth almost 75 percent of the national budget, had cascading effects in the VI, as former Governor Gus Jaspert cited it as a reason for opening the Commission of Inquiry.

Ms. Drayton declined to elaborate on the discrepancy, and the USCG did not respond to requests for comment.