More than two dozen scholars, faculty members and alumni of the University of the West Indies visited the territory this week as part of the UWI Open Campus Scholar Ship …

END_OF_DOCUMENT_TOKEN_TO_BE_REPLACED 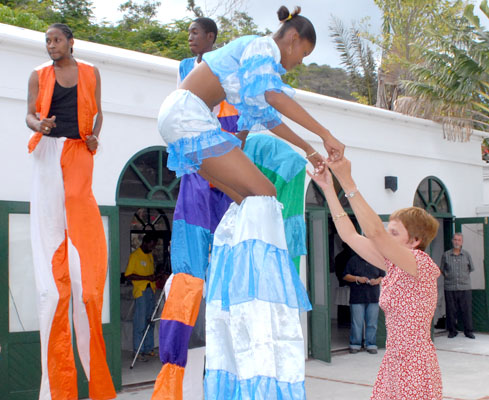 Members of the UWI Open Campus Scholar Ship Cruise dance with members of the BVI Sky Dancers during a reception at Government House. (Photo: NGOVOU GYANG)

More than two dozen scholars, faculty members and alumni of the University of the West Indies visited the territory this week as part of the UWI Open Campus Scholar Ship Cruise 2011.

Several UWI alumni from the Virgin Islands greeted the cruisers on Tuesday at the Government House.

The guests were treated to refreshments before a brief ceremony, during which some of the territory’s UWI alumni gave brief speeches on their experience at the institution.

One of them, Deputy Premier Dancia Penn, said UWI has played an important role in the lives of many VI residents — and in the development of the territory.

Dr. Heskith Vanterpool, owner of Eureka Medical and Bougainvillea clinics, explained that he owes much of his success to the university. The cardiologist encouraged the faculty to continue to invest in the lives of young people.

Governor Boyd McCleary also spoke at the event. After telling the gathering that he was pleased to host the visitors, he said any society should aspire to educate its people to the highest level.

After the ceremony, members of Zion Sounds played fungi music while the BVI Sky Dancers performed. The UWI visitors were also treated to local drinks and snacks.