With the Virgin Islands’ supply of Covid-19 vaccines set to expire at the end of July, health officials on Tuesday announced that they are reducing the recommended interval between doses …

END_OF_DOCUMENT_TOKEN_TO_BE_REPLACED 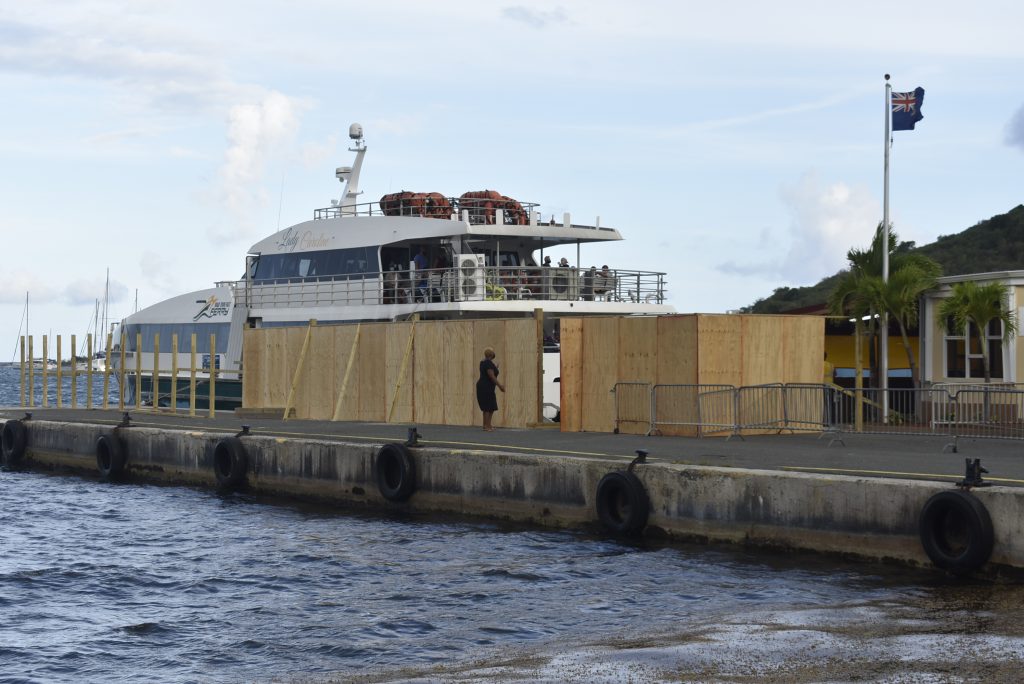 A ferry bringing passengers from St. Thomas arrives at Road Town on Tuesday afternoon. An additional daily trip was added this week, as government continues to reopen the borders while health officials are pursuing the vaccination effort with greater urgency. (Photo: JOEY WALDINGER)

With the Virgin Islands’ supply of Covid-19 vaccines set to expire at the end of July, health officials on Tuesday announced that they are reducing the recommended interval between doses to four to eight weeks, down from the 10 to 12 weeks previously recommended.

According to a Monday Covid-19 Dashboard update, 11,917 people had received at least their first dose, more than 5,000 shy of the 17,000 Health and Social Development Minister Carvin Malone had hoped would be vaccinated by the end of May.

Meanwhile, 5,949 people had received both doses, the update stated.

Mr. Malone said in the House of Assembly on May 13 that government would have to make a decision about unused vaccines by the end of the month, and officials now intend to hold on to the remaining supply for at least four weeks, as it is uncertain when they will be able to procure more, Chief Medical Officer Dr. Irad Potter said in a Monday interview.

“It’s going to be a real difficulty to access vaccines,” Dr. Potter said.

Asked Tuesday about the move to reduce wait times between jabs, Dr. Timothy Brewer, an epidemiologist at the University of California Los Angeles, said someone receiving the second jab as early as four weeks after the first injection would not experience any adverse health effects due to the shorter time-frame, but they would likely produce less antibodies than someone who waited longer for the follow-up shot.

Though the initial trials for the AstraZeneca vaccine — the vaccine used in the VI — were done with a four-week wait time between injections, after the vaccine went to market scientists found that people who had to wait eight weeks due to production issues actually produced more antibodies than those who got the second injection sooner, Dr. Brewer explained.

“It wasn’t that the four-week didn’t work: It just seemed the delay … worked even better,” he said.

At the same time that government officials are trying to quicken the pace of vaccinations, they are continuing to make travel easier for residents and tourists, adding a second daily ferry run between the US Virgin Islands and this territory.

The additional ferry trip comes as the USVI experiences an increase in known active Covid-19 cases, recording 125 active cases on Friday, up from 75 on May 21, according to its Department of Health.

But on Monday, Dr. Potter cautioned that the neighbouring territory’s surge may not be mirrored here.

According to Monday’s Dashboard update, there are now six known active cases, up from one on May 26.

And an increased caseload is not necessarily cause for panic, Dr. Potter added.

“As long as some people are travelling, it is likely that some positive people will travel,” he said.

Upward trends that show no signs of slowing are a greater cause for worry, but the VI has mostly avoided such runaway outbreaks, Dr. Potter said.

Here, the number of active cases has instead tended to fluctuate, which he attributed to the territory’s multi-step testing process and to the number of entrants varying each week.

According to Monday’s Dashboard update, all six current cases are asymptomatic and located on Tortola.

‘False positives’ or not

On Monday, Dr. Potter also pushed back on claims from some tourists who suspect they received “false positive” tests.

Part of the reason that detecting the disease is so tricky is that if a person is too early in their infection, they may not have enough viral load for the test to register, even if they are actively incubating the virus, Dr. Potter said.

Also, someone travelling as part of a group might have had exposure to the virus that no one else in the group did, and because everyone’s responses to infections are different, it is not assured that a person exposed to the virus will transmit it to travelling companions, Dr. Potter said.

According to a November 2020 blog post from the Massachusetts Institute of Technology, PCR tests can come back positive even if the viral load is so low that the positive person cannot transmit it to other people in their household.

However, on Tuesday, Dr. Brewer told the Beacon the PCR tests used in the VI “are very accurate, but they are not perfect.”

If a test comes back positive one day and then comes back negative the next day, it is possible that the original test was a false positive, especially if it had a high cycle threshold, meaning it took a high number of testing cycles for the virus to be detected, Dr. Brewer said.

A Feb. 17 article by Public Health Ontario explains, “If the virus is found in a low number of cycles … it means that the virus was easier to find in [the] sample and that the sample started out with a large amount of the virus.”

So while a positive result followed by a negative result could have been faulty, “It’s also possible that there was just a tiny amount of virus present, and that you just couldn’t pick it up anymore” during the second test, Dr. Brewer said.

“At that point you’re really into a judgment call as to which you think is correct,” he added.

Last month Jeanne Brant Roth, who said she has booked about 27 charters in the VI in the last decade, was one of the travellers who found herself quarantined on her charter boat due to a test that she suspected was a false positive.

On May 17, while Ms. Roth and her travelling companions were reading the results of their day-four tests, the person who had tested positive received a call from health services, instructing the entire party to head back to their boat to quarantine, Ms. Roth told the Beacon on Monday.

However, Ms. Roth and the other members of her party had all been vaccinated, and none of them received any positive results during their entry day tests, she said.

After the positive day-four result, Ms. Roth, her husband and their charter company were able to schedule another round of testing for their entire group on May 19.

All of the tests came back negative, she said.

But as the group spent most of their first week sailing, and at one point was allowed to anchor at a sister island while awaiting the results of their retests, Ms. Roth said she was not deterred from visiting the territory again.

“It was quite the trip. Hopefully heading back in July but definitely in November,” she wrote. “It is definitely our happy place!”

During a May 26 press conference, Mr. Fahie said 1,364 people had arrived at the Road Town ferry terminal since the seaports reopened in April.

He added that 13,830 people had arrived via Terrance B. Lettsome International Airport since it reopened in December.

And of the 2,261 arrivals processed through the airport last month, a little more than 80 percent were visitors, Mr. Fahie said