As Covid-19 cases fall rapidly since the omicron spike that started in December, a shipment of 500 paediatric doses of the Pfizer-BioNTech vaccine is now available for ages 5 to …

END_OF_DOCUMENT_TOKEN_TO_BE_REPLACED 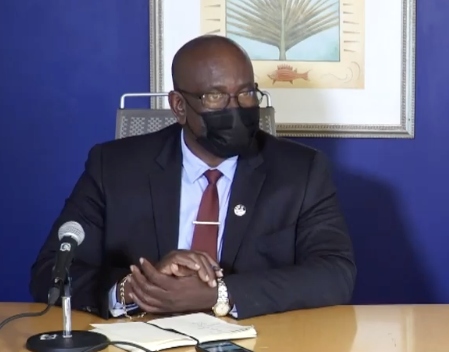 Health and Social Development Minister Carvin Malone and Governor John Rankin said on Monday that the territory’s first 500 paediatric doses of the Pfizer-BioNTech vaccine are available for ages 5 to 11. (Photo: SCREENSHOT)

As Covid-19 cases fall rapidly since the omicron spike that started in December, a shipment of 500 paediatric doses of the Pfizer-BioNTech vaccine is now available for ages 5 to 11, government announced.

Chief Medical Officer Dr. Ronald Georges said the United Kingdom supplied the doses, and he encouraged residents to have their children vaccinated.

“The paediatric doses will provide an additional layer of protection to this age group of children who can now access these vaccines in the territory,” Dr. Georges said in a Tuesday press release issued by the Ministry of Health and Social Development. “Children ages 5 and over can now be vaccinated to help protect against Covid-19.”

The doses are being administered at the Catholic Community Centre in Road Town from Monday through Friday between 10 a.m. and 4 p.m.

The ministry noted that school groups with ten or more children can receive doses via onsite vaccinations through the BVI Health Services Authority’s Expanded Programme on Immunisation. Interested groups are encouraged to contact manager Mariana Bedeau at 440-1671.

The batch expires in 10 weeks.

“Interested persons are encouraged to act quickly, so they do not miss this window of opportunity,” the press release stated. “Additional supplies will be available as these are utilised.”

During a brief video announcement of the arrival of the paediatric vaccines, Health and Social Development Minister Carvin Malone said that the territory is monitoring the Covid-19 situation across the region and internationally.

He also thanked the United Kingdom for supplying thousands of doses of the vaccines to the territory.

On Monday, a government Covid-19 dashboard stated
that there were 63 active Covid-19 cases in the territory, with 62 total Covid-related deaths since the start of the pandemic.

Cases were down by six from a week earlier.

The recent numbers are a stark contrast to what the territory experienced in December and January as it grappled with the omicron wave and numbers climbed as high as 1,387 cases on Jan. 12.

As of Monday, most of the current active cases were on Tortola, according to the dashboard. There were 49 active cases on that island, as well as 10 on Virgin Gorda, two on Anegada, and two on Jost Van Dyke.

Of those cases, three people were in the hospital receiving treatment, down from six a week earlier.

Government’s vaccination goal is set at 75 percent of the population, or about 22,5000 people.