The first phase of the Covid-19 vaccines rollout continued this week, but not before government and other officials first led by example by receiving the first few jabs at a …

END_OF_DOCUMENT_TOKEN_TO_BE_REPLACED 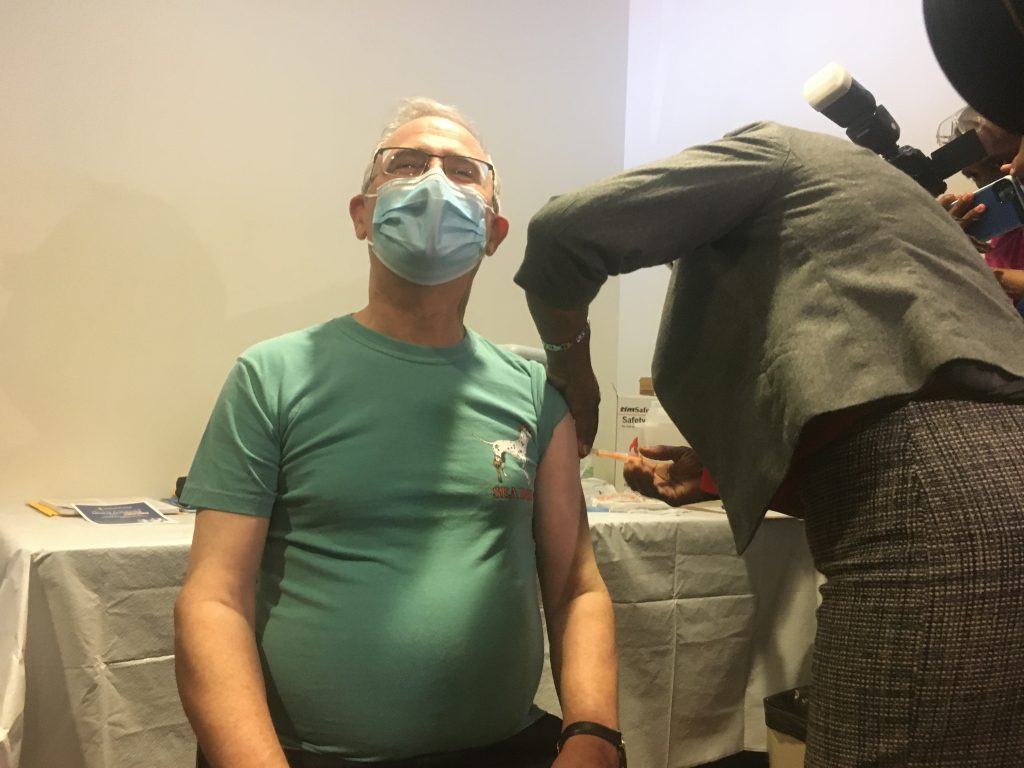 The first phase of the Covid-19 vaccines rollout continued this week, but not before government and other officials first led by example by receiving the first few jabs at a press conference last Thursday, Feb. 11.

Many of them, including Governor John Rankin, took off jackets and stripped down into t-shirts in order for nurses to better reach their veins.

“I’m afraid of needles,” confessed Speaker of the House Julian Willock. Health and Social Development Minister Carvin Malone, who admitted to being “mildly hypertensive,” had his blood pressure checked before a nurse gave him the all-clear to receive the jab.

At the time, Premier Andrew Fahie declined to be vaccinated, declaring that he’d rather let frontline health workers go first, but he told reporters that they would be able to witness him get the jab “next week.”

“We need those frontline personnel to be healthy, so we need to make sure that they’re taking that vaccine as soon as possible,” he explained. “So with that, I want to say to the people all across the Virgin Islands, this is a good day.”

As of press time, he had not yet announced that he had been vaccinated or when he planned to proceed.

After Mr. Rankin got his jab, he called the first 8,000 doses of the AstraZeneca vaccine, which arrived last week courtesy of the United Kingdom, “a real opportunity” for the territory.

“As one of the first places in the region to receive the vaccine, that gives us the opportunity to make these islands one of the safest places to live and visit, with all that means for helping to reopen those aspects of the economy that have been most affected, including tourism,” the governor said.

Mr. Malone said that getting the community vaccinated is the next step in the many months of hard work the territory has done to combat the virus.

He described the Virgin Islands as a model for the world, which he said is “now catching up with us in terms of the protocols necessary to keep the citizens safe.”

The minister added, “We are going to keep this at a level that is not going to be where we have 100 people positive and 200 people in the hospital. There are
going to be a lot of criticisms as to exactly how long do we have to keep this up, but it’s critical for us to not get weary.”

For everyone else, the Covid19 vaccination registry was live as of last week at https://ministryofhealth.gov.vg/vaccine/, although signup was temporarily halted on Thursday, Feb. 18.

Officials explained that completing the registration will not guarantee an appointment, but all adults should register regardless of age or priority level so they can get an appointment when it becomes available.

The phased approach started on Monday, with all health care and frontline workers invited to walk into various sites, including Dr. D. Orlando Smith Hospital and Road Town Police Station to receive their jabs.

Frontline and essential workers and at-risk patients also were invited into the Nurse Iris O’Neal Medical Centre on Virgin Gorda this week.

Next in line will be patients with underlying conditions putting them at severe risk of complications or death from the disease; essential workers; and,
finally, all other adults.

“The first week or so, we’ll be doing mostly the health care workers and the frontline workers,” Dr. Georges said. “After that, we would be looking to open up the vaccination centres and allow other persons to basically be scheduled to be vaccinated.”

He urged residents seeking vaccines to use the online portal as opposed to walking into the nine vaccination sites which will be scattered throughout Tortola and the sister islands (see sidebar).

That approach is designed to minimise errors and ensure details are correct so that patients can receive the second dose in a timely fashion, which he said
would be between four and 12 weeks after the first.

The territory is also expecting an additional 12,000 doses it previously secured through the World Health Organisation-sponsored Covax Facility, which will allow 6,000 more patients to get the vaccine, according to the premier. Those doses are expected late this month or next, he said.

Health officials will be collecting patients’ information and “putting it into an electronic immunisation register,” he said. “So that means that we will be capturing all the data that we require.”

Offering the vaccines at nine locations “will allow for us to not centralise the vaccination process,” Mr. Malone explained.

“We have settled it out for those retired health care professionals and a number of persons have called already and have volunteered their services. The private health care persons have also looked in terms of getting assistance to us as best we can.”

The AstraZeneca vaccine was developed by Oxford University’s development arm Vaccitech, and unlike other Covid-19 vaccines, it requires no special refrigeration storage.

In the VI, it’s currently approved for all adults over 18 who are not pregnant, with no known contraindications for medical conditions.

The 8,000 doses provided by the UK so far mean that 4,000 of the territory’s residents can receive the full course of the vaccine before the next shipment from the UK arrives, according to the premier, who said last Thursday that the UK will “probably give us all” the doses needed in addition to the 12,000 from Covax.

All the doses will be accepted, he said.

“We need as much vaccine as we can get our hands on — not just for the 40,000 people, but for more,” he said. “Not being greedy, but we also think about anything that we can help others with. And we also have to think about our tourism product. So we have to think ahead.”

However, visitors to the VI and returning residents hoping to avoid quarantine upon arrival will not get their wish just yet — at least not until at least 70 percent of the community has been vaccinated, officials said.

“We will get there, but it is important for us to all get on board with the vaccination, because … we have persons entering the territory, but we have to make sure that we are also protected,” Dr. Georges said. “Not only does the vaccine protect those who are vaccinated, but it reduces the risk of transmission.

So if we have sufficient of our population vaccinated to reduce the chance of transmission, then we can look very seriously at looking at our current restrictions: how those change and how those impact our opening of the territory.”