The High Court will hold a hearing on the issue of the District Four vacancy after Mark Vanterpool’s attorneys filed for judicial review, Mr. Vanterpool said in a statement on …

END_OF_DOCUMENT_TOKEN_TO_BE_REPLACED 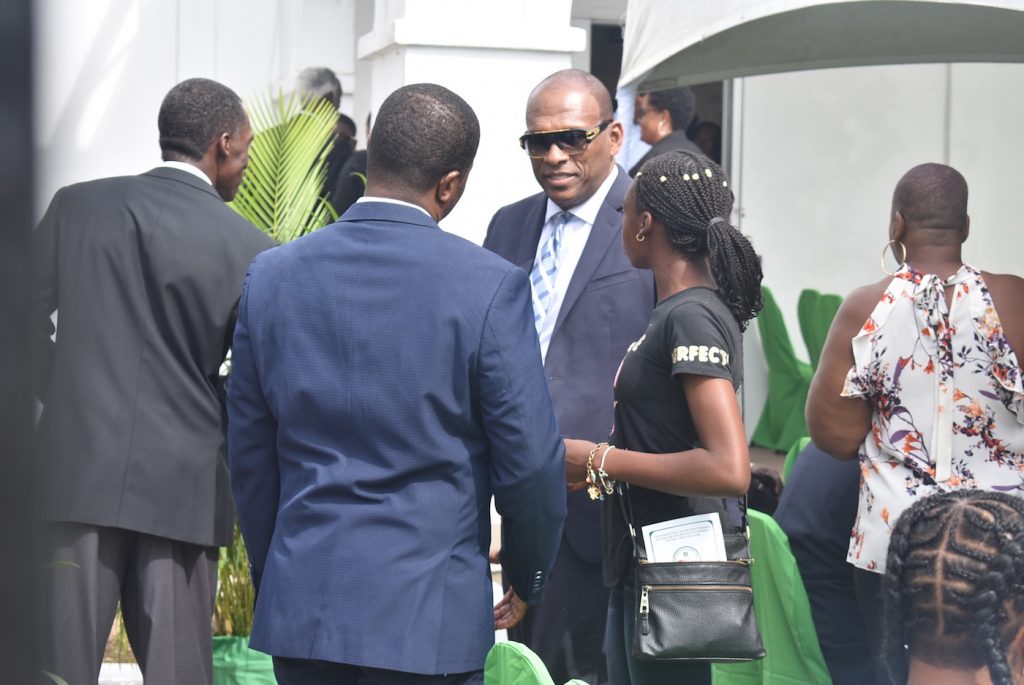 Mark Vanterpool, who was re-elected as representative for the Fourth District in February but has not been sworn in, greets members of the House of Assembly on Tuesday morning as he arrives for the Budget Address. He sat in the gallery with members of the public. (Photo: CLAIRE SHEFCHIK)

The High Court will hold a hearing on the issue of the District Four vacancy after Mark Vanterpool’s attorneys filed for judicial review, Mr. Vanterpool said in a statement on Tuesday evening.

The legal action comes after Speaker of the House Julian Willock refused to swear in Mr. Vanterpool, who was elected Fourth District representative in the Feb. 25 elections, at the House of Assembly sitting on Tuesday.

Mr. Vanterpool sat in the public gallery as Opposition Leader Marlon Penn asked the speaker why he wasn’t swearing in Mr. Penn’s fellow National Democratic Party member, and if he had sought advice from Attorney General Baba Aziz.

“This matter with the person in question will be decided on at a later time,” Mr. Willock responded. “This is a matter that could end up in the court of law. Therefore I will refrain from making any comments on the matter.”

Messrs. Willock and Vanterpool have been going back and forth over the validity of the former communications and works minister’s March 5 resignation after he reversed his decision to resign on March 14.

In Mr. Willock’s most recent statement on March 28, he said, “It would be prudent at this juncture to seek the opinion of the courts in the interest of fairness, transparency, and best practice as the honourable attorney general, of whom I have the highest respect, has advised myself, the governor and Mr. Vanterpool of his position.”

However, Mr. Willock does not intend to bring court action himself, he told the Beacon through HOA public relations officer Linton Leonard.

“It’s up to Mr. Vanterpool to bring court action against my decision,” Mr. Willock wrote in response to a Beacon query requesting clarification on his March 28 statement.

He declined to comment on whether the attorney general advised that the matter be referred to the courts.

Mr. Willock also told the Beacon in a text message that he has sought independent legal advice because he felt it was unfair for the attorney general to advise the speaker, the governor, and Mr. Vanterpool at the same time.

“For the speaker to not give an explanation to the people of [the Fourth District] why he didn’t swear in their member is extremely unfortunate,” Mr. Penn told reporters after the HOA sitting on Tuesday.

He added that it “is really a serious precedent that the speaker is setting to not take the advice of the legal authority for the territory, which is the attorney general.”

Attempts to contact Mr. Aziz were unsuccessful, and Mr. Vanterpool declined to answer this reporter’s questions at the HOA sitting on Tuesday.

Eight days after the Feb. 25 election, Mr. Vanterpool announced that he was retiring from politics for “personal reasons.”

Then on March 14, two days after members of the HOA were sworn in, the former communications and works minister reversed his decision to retire, saying in a video on his Facebook page that his resignation was considered invalid because it was addressed to the clerk of the House of Assembly instead of to the speaker, as required by law.

Mr. Willock’s most recent statement affirmed that he stood by his March 13 letter to Mr. Vanterpool, which stated that he accepted his resignation.

Governor Gus Jaspert said in a statement on March 26 that he did not intend to issue a writ for a by-election following legal advice that Mr. Vanterpool’s resignation “was invalid on the basis that the member-elect has no constitutional right to resign prior to being sworn in.”