Around sunset on Sunday, July 31, in the Bernard “Yampie” Nibbs Festiville, bartender Dr. Garvin Dougan was learning how to make a new cocktail. He hadn’t heard of the combination …

END_OF_DOCUMENT_TOKEN_TO_BE_REPLACED 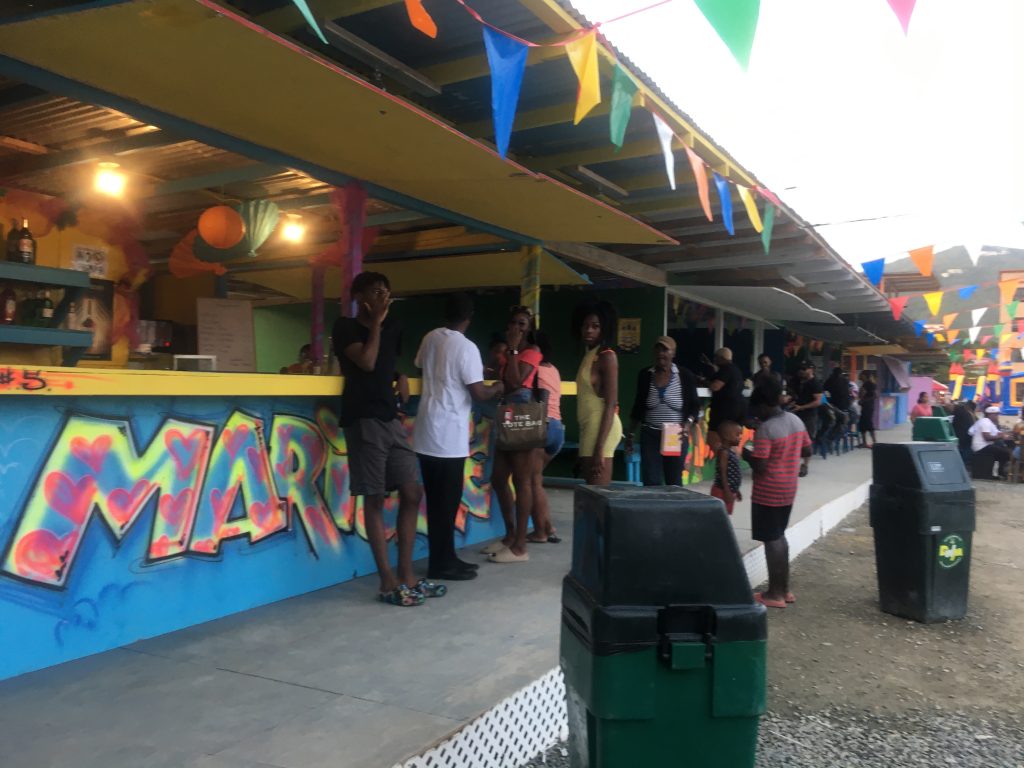 On Sunday, July 31, patrons started to trickle into the Bernard “Yampie” Nibbs Festiville, as booth operators began to set up. (Photo: CLAIRE SHEFCHIK)

Around sunset on Sunday, July 31, in the Bernard “Yampie” Nibbs Festiville, bartender Dr. Garvin Dougan was learning how to make a new cocktail. He hadn’t heard of the combination of vodka, club soda and cranberry juice known as the “skinny bitch,” though he was excited to add it to his repertoire.

On any other evening, he might be found examining medical images or ordering a blood test. But this year for the first time, the physician was spending his evenings stirring up drinks and wiping down counters at his booth at the August Emancipation Festival.

All around him, his fellow vendors were setting up their stations, filling pots with meat and vegetables, and arranging bottles in preparation for a long night of music. Asked about business so far, they reported everything from frustration from limited budgets to unexpected rain. But they all agreed on one thing: After two years of Covid-19, people were delighted to be back celebrating.

Patricia Lyle said Corona, curry goat and stew pork were her best sellers — just as they have been for the seven previous festivals — at Bushman and Brown Man, a booth she runs with her husband.

Normally, she said, she works at Patricia’s Beach Bar at Smugglers Cove, and over the past two years she struggled at times and missed the supplementary income the festival provided. But so far, business this year was on its way toward making up for the lull.

Business wasn’t as booming for everyone. Glenford “Chappy” Maduro said he was hampered by the smaller festival and scaled-back budget. A public officer by day, he sells popcorn and cotton candy at Chappy’s Fun Food to families on the east side of the festival grounds. Normally, he explained, the VI Festivals and Fairs Committee arranges to import Coney Island rides. This year, that didn’t happen, leaving festivalgoers with the small selection of rides already available in the territory. Partially due to this, Mr. Maduro called business “terrible.” He said he heard that the committee and the ride operator couldn’t reach a deal that would make it affordable to transport the rides from outside the territory.

“I heard that they were offering one price and weren’t budging until they got what they wanted,” he said.

Although it’s nice to have the income from the side business, he said, he doesn’t depend on it. He was grateful for that this year, since he’d noticed families seemed to be spending less.

“I don’t know about the financial constraints of people, but that’s a problem,” he said. “But when it comes to being a vendor, I don’t think it’s me alone. I think it’s everybody.”

Despite his struggles on the family-oriented side of the festival grounds, Mr. Maduro called the turnout in general “great,” adding that he’d spotted many former residents returning to enjoy the festivities.

“Not just visitors, but a lot of locals seem to be glad to come home,” he said.

Dr. Dougan said he’d heard some “negative talk” about the musical lineup, and he noted that budget constraints may have limited what acts could be booked. But he wasn’t pointing fingers.

“I think the committee did the best they could in the time they had,” he said. “Nobody knew whether there would even be a festival this year.”

Dr. Dougan is no stranger to entrepreneurship. He already has two side businesses, including a car rental firm and a heavy equipment company. Still, a festival booth is an altogether different undertaking with a steep learning curve, he said. Vendors only had about two weeks to complete the application process, he added.

“Some colleagues, friends told me that they were interested in doing it and they asked me if I would be interested, so I said, ‘Why not?’ I threw my hat in the ring,” he said. “The biggest challenge was probably just getting back and forth to get the different licences.”

Even after being approved, the doctor-turned-bartender had to dig deep in his own pocket for the initial layout of funds. Setting up the elaborate booth — more like a miniature wooden building, which has to be put up and torn down in the same two-week span — isn’t cheap, especially for a brand-new vendor.

“Most of this material is single use,” he said. “It’s very expensive. That’s the biggest cost starting off, as you have to buy everything. When you are able to store it up and come back next year, you don’t have to spend as much because you have so much.”

Dr. Dougan said he has accepted that at best, “I believe this year we’re just gonna break even for the capital that was put in.”

He already has plans to be back next year, when he hopes to finally recoup his investment. In the meantime, he said, he was enjoying the ride.

Being the new kid on the block, Dr. Dougan knew he had to find a way to stand out. Before opening, he took time and consulted with wholesalers.

“I said, ‘Okay, let me know what people would want to drink,’” he said. “Even just choosing the colours and the designs. We kind of went a little extra and got some glowing cups.”

His determination showed. For instance, he offered customers a choice of no less than three different types of vodka, including local brand BVI Vodka — all for the same price.

To run the kitchen, he recruited his aunt, whose cooking prowess seemed to be paying off.

His bestseller so far?

“Chicken soup. Everybody comes every day as early as 12 o’clock asking if we have soup available,” he said. “People have been coming out in good spirits and large crowds and supporting us.”

Ms. Lyle added that after two years of Covid-19, attendees’ excitement was infectious.

“Even in the rain, they are outside there dancing,” she said.