A veteran who has long served on the Remembrance Day Planning Committee was recognised amongst his colleagues on Sunday during a ceremony that commemorated and honoured ex-service men and women. …

END_OF_DOCUMENT_TOKEN_TO_BE_REPLACED 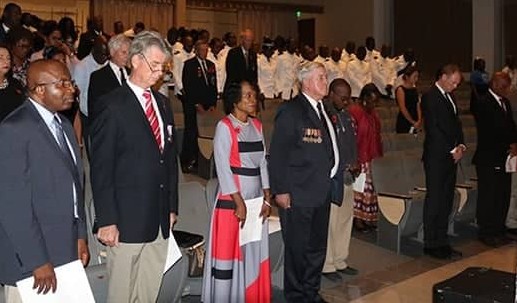 Ex-service men and women were honored during the Remembrance Day ceremony on Sunday. (Photo: PROVIDED)

A veteran who has long served on the Remembrance Day Planning Committee was recognised amongst his colleagues on Sunday during a ceremony that commemorated and honoured ex-service men and women.

John Cope recalled his days serving the Federation of Malaya as his most challenging because he spent 10 days living in the jungle, relying on whatever nature provided for food, according to a tribute.

Mr. Cope served in the Royal Air Force in 1952 and was deployed to many parts of the world, including Berlin Cyprus, Malta, the United Kingdom, North Africa, and Gan, the southernmost island of the Maldives.

After being sent to the Virgin Islands to transport a vessel in the early 1980s, Mr. Cope found employment at Tortola Yacht Charters, and then with Hirst Marine Surveyors.

He retired in 2017 and moved back to the United Kingdom.

On Sunday, the ceremony began with a procession that included a few service men and women as well as civic organisations and service groups including the Boys Brigade, the Girls Brigade, the Girl Guides, police officers, firefighters, and prison officers.

Along with the territorial song and national anthem sung by Gen Y Factor winner Dwight Hutchinson Jr., the service included an act of remembrance, a memorial, a reading of the poem “In Flanders Field,” and remarks by Sharleen DaBreo-Lettsome, permanent secretary in the Office of the Deputy Governor.

“As we honour our Armed Forces past and present today, we recognise the overriding importance of leadership and our debt to those who have exercised the highest level of leadership at all ranks and in all services,” she said.

Each year, Remembrance Day is recognised on Nov. 11, but commemorations typically are held on Remembrance Sunday.

The tradition follows a memorable occasion that happened on the eleventh hour of Nov. 11, 1918, when the “guns of the Western Front fell silent after more than four ears of continuous warfare,” the progamme for the Sunday service explained.

It was on this day that Germany called for an armistice in order to secure a peace settlement, marking the end of the first World War.

“Each year we highlight a veteran living or dead,” said event organiser Sandra Herbert, who works in the Deputy Governor’s Office.

Days before the ceremony, press releases were sent out asking veterans to register before the event.

According to Ms. Herbert, the register was launched in 2013 and the list continues to grow.

The list currently includes 71 men and women, some of whom are still serving, she said.