This year’s 52nd Virgin Gorda Easter Festival will be scaled down again because of financial constraints and efforts to highlight local culture over international artists, officials said last week. At …

END_OF_DOCUMENT_TOKEN_TO_BE_REPLACED 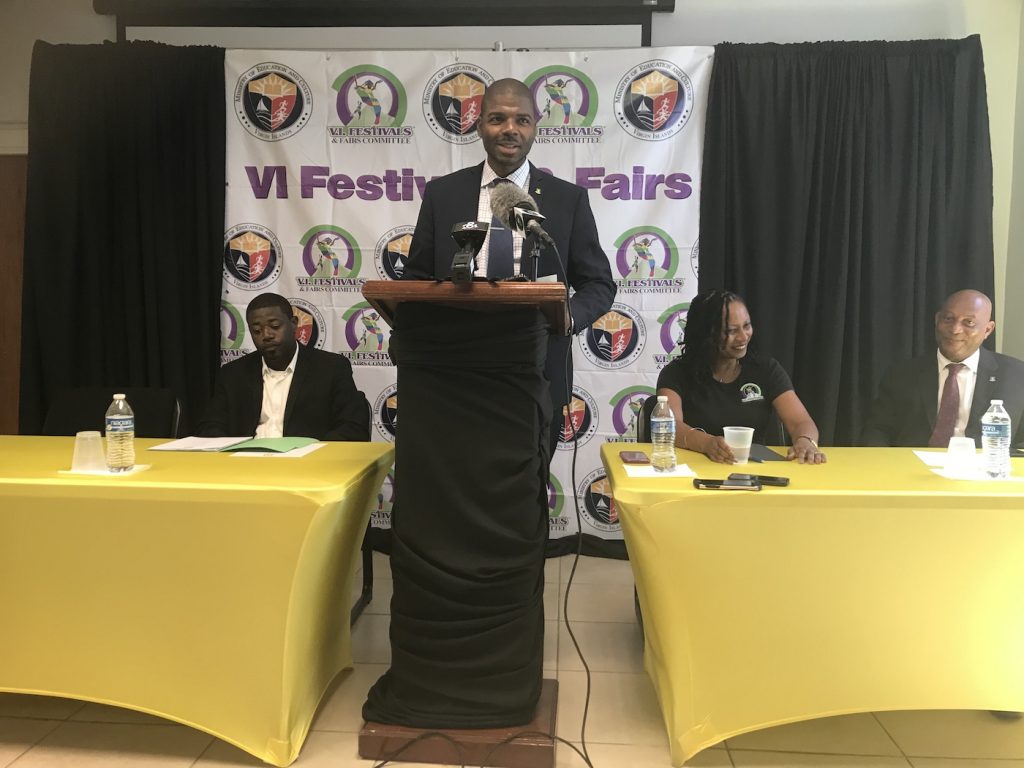 Deputy Premier Dr. Natalio “Sowande” Wheatley said at a press conference on Friday that the Festivals and Fairs Committee would receive $710,000 for all festivals this year. (Photo: GENEVIEVE GLATSKY)

This year’s 52nd Virgin Gorda Easter Festival will be scaled down again because of financial constraints and efforts to highlight local culture over international artists, officials said last week.

At a press conference on Friday, organisers detailed the upcoming celebrations, which will start Saturday and continue through April 22 under the theme “A Cultural Jamboree in Musical City.”

The festivities will honour long-time participant Roy O’Neal, and will carry the slogan, “Culture, rhythm and rave like never seen for Virgin Gorda Festival 2019.”

Natural Resources, Labour and Immigration Minister Vincent Wheatley (R-D9) started off by saying that the Virgin Islands Festivals and Fairs Committee did not receive funding until recently.

“We should make sure they have money to do what they have to do and we should make the money available not two days before the event but at least eight months in advance,” he said in an apparent jab at the previous government, which was voted out on Feb.25.

“Because if you’re going to book international artists, they aren’t waiting for you to find money. You either book them in advance or you simply don’t get them.”

But Deputy Premier Dr. Natalio “Sowande” Wheatley later explained that in the interest of fiscal responsibility and cultural pride, he asked the chairman of the VIFFC, Carnel Clyne, to focus more on promoting local artists.

“I would like to see us go back to the days when these festivals were mainly about family, friends, fun, food and celebrating our culture,” he said. “It’s all right that we have artists who come from many different countries that we enjoy. But I think we’ve gotten a little bit far from our roots, and we have to return to our roots.”

He added that the VIFFC is $300,000 in debt because of unbudgeted expenses incurred under the previous administration in 2017 and 2018. The committee’s total budget for this year will be $710,000, to cover celebrations in Brewers Bay, East End, Carrot Bay, and Road Town as well as the one in Virgin Gorda.

Dr. Wheatley also made a commitment to repay vendors who are still owed money from previous festivals, although he said he could not give an exact date.

He added that the government will not have exact figures for its budget until its finances are audited.

“Considering the needs that we have in this territory following the storms of 2017, it behooves us to be very responsible in terms of how we spend every cent,” he said, adding that more money should be spent on college scholarships, fostering youth talent, and rebuilding infrastructure.

Dr. Wheatley also said that he would take responsibility for scaling back the festival because of financial constraints, and did not want Messrs. Clyne and Wheatley blamed for the scale-backs.

“Scale-backs will happen,” he said. “Because we have a limited amount of money, and we cannot repeat the current situation where we have hundreds of thousands of dollars of unbudgeted expenditures moving forward.”

He added that the reduced festival funding should stimulate a conversation about the role of festivals in the VI community and their reliance on government funding.

“Because really the territory was doing well economically and it seems as though things got a little out of control from my perspective…When we really think about the early festivals, 52 years ago or 65 years ago government wasn’t putting any real money there,” he said. “And if you talk to the elders they had a good time. And it was memorable.”