Raindrops cascaded over lush vegetable gardens and several large garbage bins filled to the brim with empty glass bottles on Feb. 4 at The Valley, Virgin Gorda eco-park while Green …

END_OF_DOCUMENT_TOKEN_TO_BE_REPLACED 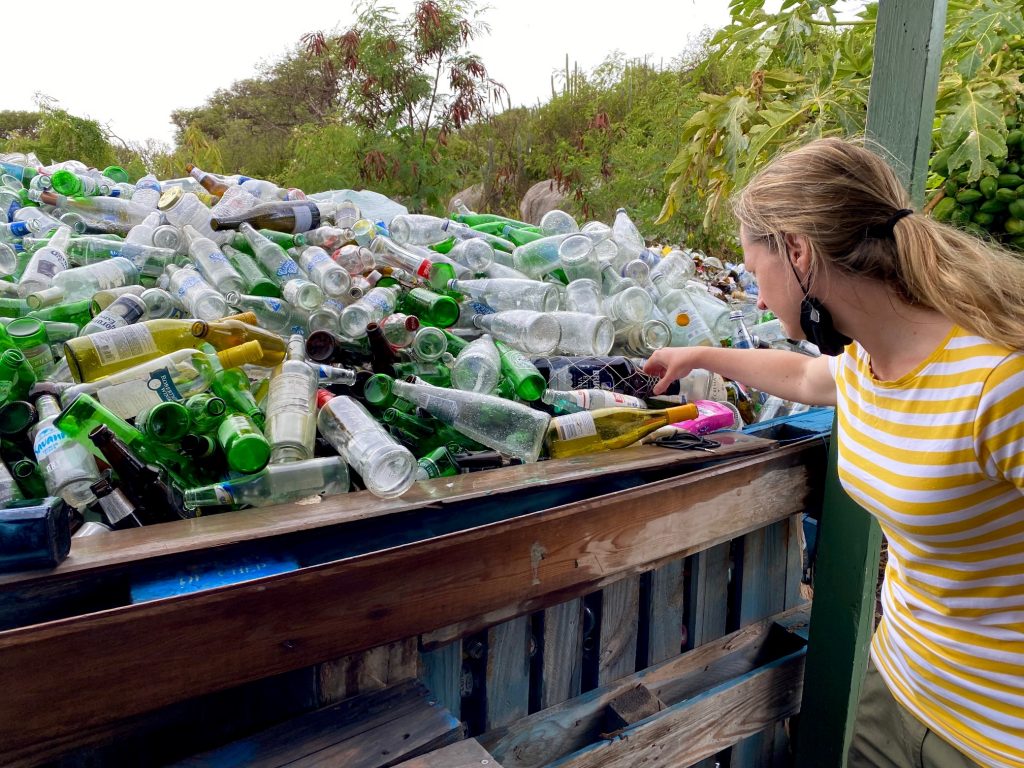 Green VI members showcase recent innovations in sustainability, including plans to crush glass and turn it into building materials for roadways and other projects. (Photo: DANA KAMPA)

Raindrops cascaded over lush vegetable gardens and several large garbage bins filled to the brim with empty glass bottles on Feb. 4 at The Valley, Virgin Gorda eco-park while Green VI Deputy Director Sarah Penney and members of the sister island team demonstrated some of the ways the organisation is working to expand its sustainability programmes.

2022 holds some unprecedented opportunities for Green VI, especially as a new piece of equipment gets closer to being fully functional. A new glass crusher is just about ready to fire up, and Ms. Penney said it should open new doors for turning recycled glass into aggregate for building roads and other construction projects.

Ms. Penney noted that 20 to 25 percent of waste collected by the organisation is glass, while plastics make up about 70 percent.

The eco-park is identifiable by the set of blue, green and grey recycling bins out front, and just up the road is the converted shipping container that serves as the Green VI headquarters on the island.

Green VI increased the number of recycling collection bins across the territory from 17 to 46 in April 2020, just as residents were exiting lockdown en masse.

In recent months, teams have been working to replace the pallet-board bins with ones made from polywood, a composite of recycled plastic produced on island by the company VI Plastics.

Information about where to find recycling locations is available on the Green VI Recycle app.

While Green VI is proud of efforts with its WE RECYCLE programme, which started on VG in 2017 to divert waste from the incinerator, Ms. Penney said the organisation is also eager to focus on the educational component of its mission.

“Our function as an organisation really comes down to behaviour change in all the work that we do,” she said. “If we litter less, then there will also be fewer mosquito breeding sites.”

At the Virgin Gorda eco-park, visitors and volunteers have the opportunity to learn first-hand about different sustainability projects.

Visitors can ride in electric vehicles, see how recyclables are processed on island, learn how anaerobic digesters are used to break down compost, gain knowledge about how to start a home garden, and hear about the “Bug Out” programme.

Green VI Virgin Gorda manager Vernessa Bellot, along with test recycling foreman Jose Jones and outreach officer Nicklous Kanhai, have been working particularly hard to reach out to community members about vector control. Of particular concern is the Aedes aegypti mosquito that spreads diseases including Zika, dengue and chikungunya.

Pests like mosquitoes only need a small amount of fresh water — like that collected in buckets or trash after a rainstorm — to breed rapidly.

The VG team also recently welcomed vector control scientist Dr. Amy Lynd, who has researched ways to reduce mosquitoes in communities around the world, including recently in Uganda.

Spreading knowledge about how to prevent breeding rather than using chemical treatments has the benefits of being proactive and not harming the pollinators that help the island’s plants thrive, Ms. Penney said.

Ms. Bellot said their systematic approach has made a noticeable difference in the spread of mosquitoes since the programme’s launch in 2016, as recorded in their colour-coded map of properties.

“The app shows you that over time there has been a decline across various areas with the number of breeding sites,” she said.

Green VI’s website notes a 94.9 percent reduction in “high risk” parcels throughout the territory after the number of documented breeding sites was cut in half.

Mr. Jones said he finds it meaningful to connect directly with members of the Virgin Gorda community and share his love of agriculture.

Anyone interested in touring the facility can schedule a visit at 346-4040.