A parade of kooky hats, a family-friendly picnic in St. Thomas Bay, a Monday morning Rise and Shine Tramp, and a record number of food stalls on Saturday were the …

END_OF_DOCUMENT_TOKEN_TO_BE_REPLACED 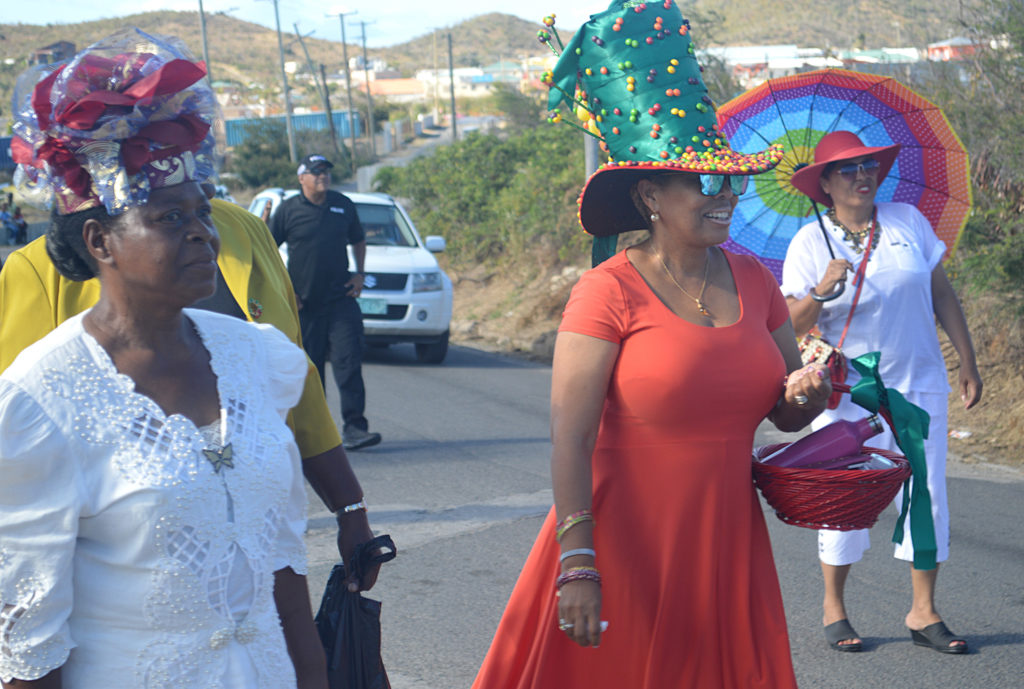 A parade of kooky hats, a family-friendly picnic in St. Thomas Bay, a Monday morning Rise and Shine Tramp, and a record number of food stalls on Saturday were the highlights of a Virgin Gorda Easter Festival that presented organisers with a challenge: how to stay true to tradition while devising innovative ways to hold a smaller, post-hurricane event.

“We knew there were lots of other things to make the festival really something that people wanted to come out and participate in,” said Esther O’Neal-Wheatley, who helped brainstorm ideas for the event, which was themed “tradition, unity and culture.”

For her, that meant helping organise — and marching in — Sunday’s First Annual Ralph T. O’Neal Hat Parade. The new event took place between Valley Methodist Church and St. Mary’s Anglican Church, which, according to Tourism Director Sharon Flax-Brutus, was the site of the first VG Easter Festival 51 years ago.

Ms. Wheatley said the hat parade grew out of the “back and forth” between residents and churches about holding an event on the day most Christians observe the Sabbath, so she proposed a compromise.

“People in this community are famous for their spectacular church hats,” she said. “So we felt this would be a good way to involve that in a small parade in between the two churches that are close to each other and have a tea party afterward to celebrate.” Residents didn’t have to register to be in the parade, she said.

“Just come and wear your hat,” she explained. “We are hoping we will be able to carry on this tradition and make it an annual event, and encourage people to come out and show community spirit. I think this is a good beginning.”

Participants in bonnets festooned with tinsel, plants, streamers, stuffed animals and flowers grooved to gospel tunes as they marched up the road. Roy O’Neal, who wore a palm-frond-decorated straw hat, led the pack on his tinsel-decorated bicycle, eventually winning the prize for “Best Irma Hat.” Others claimed the honours for biggest, smallest, most elegant and funniest hats.

Organisers acknowledged that the parade, which took place at the same time as an Easter egg hunt at Walters Recreational Park sponsored by the Lions Club, was small, with about 20 people participating. Like the rest of this year’s festival, the goal was to hold more scaled-back events as hurricane recovery efforts continued.

“That’s the result of the hurricane: We’ve gone back to how the festival used to be at the very beginning,” said Ms. Flax-Brutus, who appeared in a massive Cat in the Hat-style top hat adorned with Skittles candy, passing out treats to fellow marchers and those watching along the parade route.

She said she decided to enter the parade only last Thursday, and enlisted her sister to help her design the massive creation. In the end, it won her the grand prize of $500 sponsored by Ralph O’Neal, which she said she would donate to fund art classes at the Bregado Flax Educational Centre’s Primary Division.

She added that she was already considering ways to boost attendance for next year.

“Some of us were talking about getting the schools involved and giving out straw hats to get the kids out here,” she said.

Organising committee chairwoman Lyra George said organisers worried that few people would show up for the parade because it was a new event, but in the end they were pleased.

“It turned out to be really good,” she said. “The ladies’ hats were spectacular, and they paraded it very well.”

Despite the decrease in scale, Saturday’s food fair was “awesome,” Ms. George said.

“I think probably for the first time … we had like 22 vendors in the village,” she added. “We were surprised at all the people that were just calling us that wanted to join, wanted to add themselves in, wanted to be a part of it.”

However, she said, a lower turnout overall was to be expected because “people like nighttime music, but we’re not doing any of the big nighttime bands this year.”

She added that this decision helped to keep the event more family-friendly.

Some residents also acknowledged that the festival might be more subdued because of the recent death of Edwin “Speedy” George, founder of Virgin Gorda Transport, which operates Speedy’s ferries.

Nevertheless, the show had to go on, and Monday featured a St. Thomas Bay beach picnic with about half the number of vendors as on Saturday.

Monday also featured a Rise and Shine Tramp that started shortly before dawn, a fashion show, and a Unity Parade with performances by Relentless, VIBE, OMG Band and the Royal G Dancers.

Around 12:30 p.m. Monday, as more people began to trickle in, vendor Juliette George, who has sold conch soup, goat water, pork chops and other goodies out of her festival booth for the past four years, was encouraged. Her other stall in the Administration Building was impacted by the storm, and she said she was grateful the festival was happening at all.

“[After Irma] I wasn’t expecting to be able to do this at all. I’m glad it’s happening,” she said. “We live on Virgin Gorda and we are from Virgin Gorda. I’m glad that people can come and enjoy.”

Ms. Wheatley, who called herself a “community supporter,” said the event showed how important it is for residents, whether or not they are formally involved with the festival committee, to step in and come up with new ways to celebrate.

“As BVIslanders, whether we are from here or not, we have to stop standing on the sidelines waiting for special invitations to participate in our community. If we don’t do it, it’s not going to get done,” she said, adding that residents should ask, “‘How can I help you?’”

Ms. Flax-Brutus said she was looking to Monday’s beach picnic as a good example of the kind of traditional events that characterised the festival during its early years.

“Even in the worst of times you can have the best of times,” she said. “That’s how I look at it.”