A new agreement between this territory and the United States Virgin Islands will allow charter boats to travel more freely between the two archipelagos, according to Premier Dr. Natalio “Sowande” …

END_OF_DOCUMENT_TOKEN_TO_BE_REPLACED 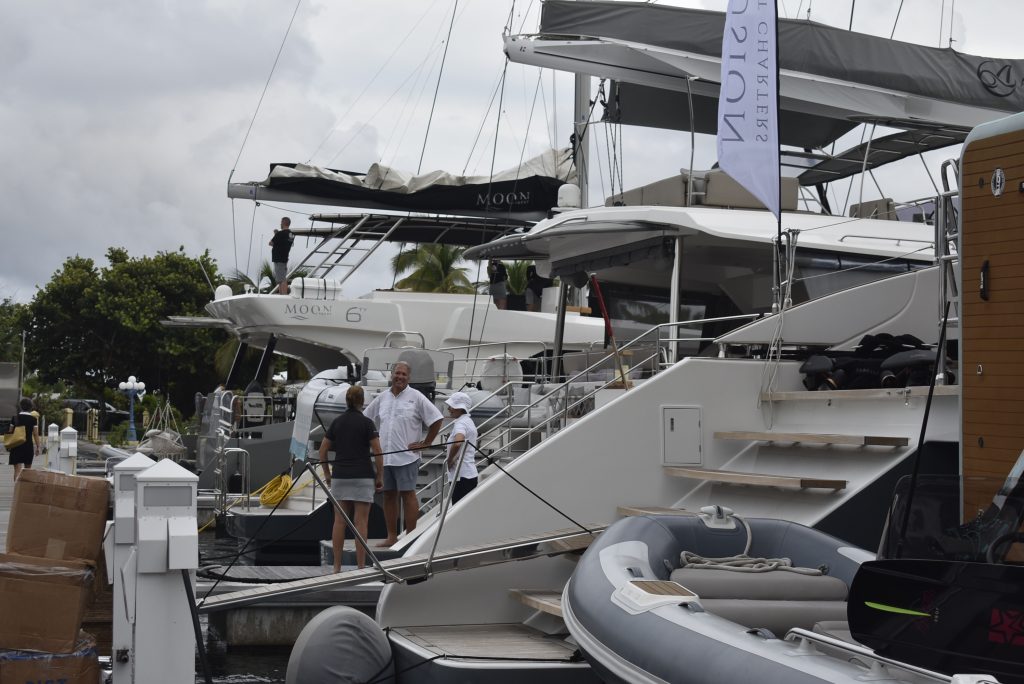 A new agreement between the governments of this territory and the United States Virgin Islands will allow charter boats, such as those shown above at the BVI Charter Yacht Show last week, to travel more freely between the two archipelagos. (File photo: ZARRIN TASNIM AHMED)

A new agreement between this territory and the United States Virgin Islands will allow charter boats to travel more freely between the two archipelagos, according to Premier Dr. Natalio “Sowande” Wheatley.

“In an effort to provide a more efficient and streamlined experience for our incoming guests, effective Friday, Nov. 11, we have taken the decision not to require BVI trade licences from foreign-based commercial recreational vessels conducting day or term charters or water taxis,” the premier said in a video statement posted Friday on Facebook. “Work permits will not be required for the crew working on these vessels.”

The USVI, in return, has agreed “in principle” to reciprocal rules for this territory’s boats conducting business across the border, according to the premier.

Without such reciprocity, he explained, heightened regulations “could have crippled” traffic on both sides.

Dr. Wheatley also said to expect new policies and amendments to existing legislation that will “recognise transient vessels, modify fees, [and] provide greater ease of access while ensuring that the economic value of locally based charter operations is protected.”

The announcement came before a Monday press release from USVI Governor Albert Bryan Jr. detailing the arrangement’s implications for the neighbouring territory.

In the USVI, he said, the newly adopted system “will permit BVI vessels to enter the USVI cruising waters, docks and marinas” as long as they check in at a US Customs and Border Patrol station.

Charter vessels that enter must comply with US Coast Guard regulations, show a trade licence and proof of vessel inspection in this territory, and pay the required entry fees, according to the release.

Likewise, the release stated, this territory will permit USVI-based and -licensed vessels to use its waters for both day and long-term charters as long as they pay the required fees and present evidence the vessel underwent licensing and inspecting in the USVI.

“This reciprocal relationship restores friendly boating and use of each territory’s waters and picturesque scenery,” Mr. Bryan said. “Reciprocal arrangements for entry of water taxis and charter boats to pick up and drop off passengers in USVI and BVI waters and docks is also in process. This has been a long-developing arrangement based on mutual desires to enhance friendship between the two territories.”

He added that he expects the new requirements to “benefit the economies of both the BVI and the USVI.”

Charter yacht operators — as well as restaurants and other businesses that cater to day-trippers — have long clamoured for easier and more streamlined reciprocal arrangements for boats travelling between the two territories. The move gained momentum following the September Inter Virgin Islands Council meeting in St. Thomas between the two governments — their first formal meeting since 2020.

The release from the USVI warned Dr. Wheatley’s government that if the territories cannot come to agreement on a reciprocal entry system, vessels will have to “comply strictly with established provisions for doing business in the USVI and that such access and use [is] not for free and [cannot] be fully regulated by the USVI and federal government agencies.”

Dr. Wheatley said the new deal will enhance the charter industry and other tourism subsectors in this territory.

“We are grateful to those who have chosen to have their base of operations in the BVI; we recognise their important continuous contribution to the BVI economy, and we in no way underestimate the value of this sector,” he said.

He added that he recognises that the first post-pandemic tourism season presents difficulties for many businesses, including sister islands operators who tend to suffer more from “reduced maritime traffic.”

“There is an immediate need to make some adjustments to ensure that this tourism season affords all subsectors the opportunities to pursue a return on their investments through adjusted provisions for increased maritime traffic,” he said. “Without improved traffic numbers, those opportunities are reduced.”