The Winter Olympics are nothing new to the Virgin Islands. In fact, the first time the territory participated in the games was at the 1984 Winter Olympics in Sarajevo, Yugoslavia, …

END_OF_DOCUMENT_TOKEN_TO_BE_REPLACED 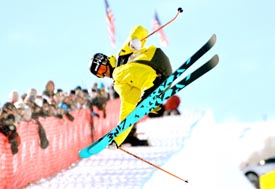 The Winter Olympics are nothing new to the Virgin Islands. In fact, the first time the territory participated in the games was at the 1984 Winter Olympics in Sarajevo, Yugoslavia, when Erroll Fraser competed in ice speed skating.

Based on previous competitions and the recently added halfpipe skiing event, the 18-year-old skier believes he has a “pretty good chance” at making the 2014 Winter Olympics in Sochi, Russia.

“The last event I was at everyone was there, except for the best person in the world, and I took sixth place,” Mr. Crook said.

During the past couple years he has consistently placed in the top three in halfpipe ski competitions.

The event is very similar to snowboarding, with skiers doing the same tricks, like 1,260-degree turns high above the ground. And, despite excelling in the sport, Mr. Crook has tried snowboarding only once.

“It is the exact same thing, but it is on skis,” Mr. Crook said. “I have tried a couple of double flips, which is like the new thing to do. I haven’t quite gotten those, but they are coming along.”

Mr. Crook was born and raised in the VI, but moved to Wisconsin in 2001.

“That’s when I first got into skiing,” Mr. Crook said.

During his high school years, he moved to Colorado to pursue his love of the sport. He attended Crested Butte Ski Academy and later transferred to the Vail Ski & Snowboard Academy.

“That’s when I really started training and getting into halfpipe and getting on the tour,” Mr. Crook said.

The skier, who holds a VI passport, realised he could represent the territory at the Olympics if he created an association. After working with the BVI Olympic Committee he formed the BVI Ski Association.

“Although our first Olympian, Errol Fraser  was a speed skater, this is very unique for the VI and a great opportunity for a VI citizen to participate in winter sports to compete at the highest level,” BVIOC President Ephraim Penn said.