The August Emancipation Festival is officially under way. With the slicing of a pink ribbon strung across the stage, the Bernard “Yampie” Nibbs Festival Village officially opened on July 27. …

END_OF_DOCUMENT_TOKEN_TO_BE_REPLACED 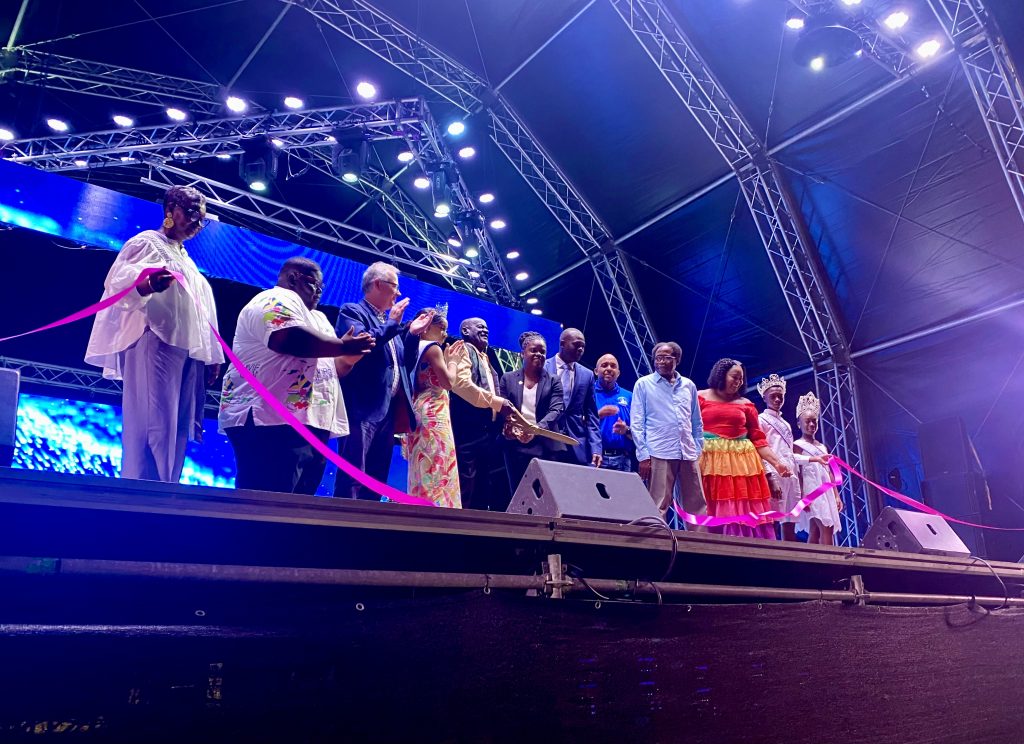 The August Emancipation Festival is officially under way.

With the slicing of a pink ribbon strung across the stage, the Bernard “Yampie” Nibbs Festival Village officially opened on July 27. Gospel musicians including headliner Sherwin Gardner then took to the stage, drawing hundreds of attendees as the evening progressed.

“This is the first time since 2019, due to the Covid-19 pandemic, that we will physically come together to celebrate this historical milestone as we reflect on the goals, aspirations and vision of our foreparents to be a free people,” Education, Culture, Youth Affairs and Sports Minister Sharie De Castro said during a House of Assembly meeting on July 21.

The next day, preliminary events got started with the first Warm Up Tramp in 15 years, followed by the Calypso Review on July 23 and the coronation of the new Miss BVI on July 24.

The event lineup is more modest than in the pre-pandemic years because of a limited budget and scheduling uncertainty, but organisers raved that the weekend was “fantastic, successful and incident-free.”

“Our first tramp in over 15 years, the Calypso Review featuring your past favourite calypsonians, Destra stopped by to give what she always gives, and a new queen has been coronated!” the Virgin Islands Festivals and Fairs Committee wrote on its Facebook page.

The official opening ceremony for the August Emancipation Festival took place on July 27 the Festival Village, followed by the Gospel Fest.

During the July 22 tramp in Road Town, Kaleidoscope Troupe marched alongside a large truck where OMG Live and Boss performed as the vehicle moved.

Dozens of people joined along the route from the Market Square to the Festival Village Grounds starting around 9 p.m.

One side of James Walter Francis Drive was closed to accommodate the parade, which concluded in the Festival Village, where people drank and ate while listening to a free night of music.

Attendee Cindy Rosan said the tramp was a success and congratulated organisers.

“Bringing back tramps is a huge deal in reviving our culture during Festival,” she said.

Rain came and went during the night, but the crowd picked up closer to midnight when Trinidadian soca musician Destra took the stage. Around 2 a.m., Xtreme Band and VIBE followed her and played crowd favourites.

“It was a great initiative overall,” said Nicoy Hendrickson. “I’m happy that they didn’t cancel the event.”

Mr. Hendrickson said that he’s looking forward to attending more events and showing his support for his friends who are local artists.

Last night for Gospel Fest, a Heritage Month event, there was no cover charge, and artists including Oneyke, Dwight Hutchinson, and Sherwin Gardner were scheduled to take the stage.

Tonight, there will be a torchlight procession, followed by entertainment from DJ Phenom, Hashim, ABM, Xtreme Band featuring Pascal, Cool Session Brass, and Onyan and the 3 Cylinder Band.

July 30 is International Soca Night and the Soca Monarch Competition. The winner will take home a $10,000 prize. There will also be performances by Mr. Killa, VIBE and DJ Dre.

The next day will feature the August Monday Parade, followed by a lineup of VI bands at the Festival Village that night, including It’s a Secret Band and Evolution Band.

International Reggae Night — with artists including Ritical, DJ Taz, Sistah Joyce and Steel Pulse — will be held Aug. 2, followed by a final night of music in Road Town on Aug. 3.