Hoping to inspire excitement about cycling, Barry Jones has been spending his weekends helping people of all ages find their balance and learn the sport. On Feb. 27, 6-year-old Caleb …

END_OF_DOCUMENT_TOKEN_TO_BE_REPLACED 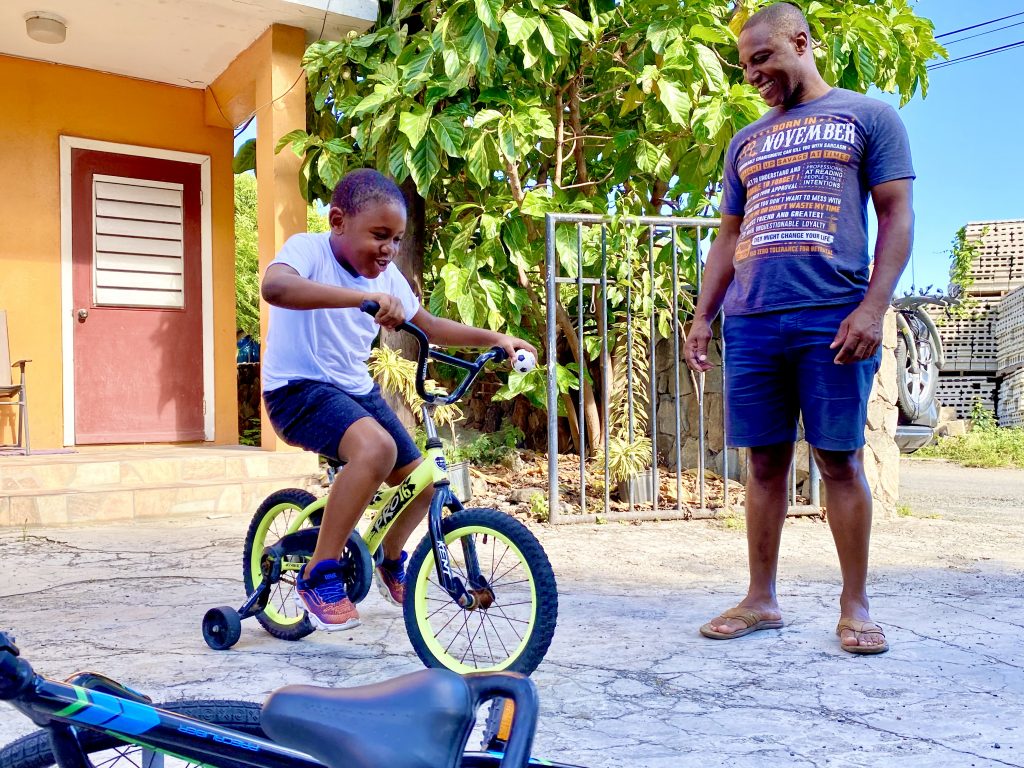 Caleb Joseph, 6, tests out his bike before taking it to the Festival Village Grounds on Sunday to practise cycling without training wheels at “Learn to Cycle” lessons, a programme geared to increase interest in the sport. (Photo: DANA KAMPA)

Hoping to inspire excitement about cycling, Barry Jones has been spending his weekends helping people of all ages find their balance and learn the sport.

On Feb. 27, 6-year-old Caleb Joseph hopped on a bike — the one without training wheels — to cruise around the Festival Village Grounds in Road Town after getting his ride fine-tuned.

Mr. Jones, who also heads a property consulting business, has recently been offering classes for individuals and families. He also has a bigger vision for demonstrating how cycling can be a fun and healthy passion to last a lifetime.

He was born in Trinidad and grew up in the Cayman Islands before travelling the world, finding favourite cycling spots in Italy, the Netherlands, and other areas.

“This is the culmination of an interest I’ve always had to develop cycling initiatives, especially for the youth and women,” he said.

One of the world’s top cyclists, Gene “Geronimo” Samuel, also calls Trinidad and Tobago home, and he has represented his country in four consecutive Summer Olympics. Mr. Jones said he would love to see the VI one day produce such star athletes, but that can only happen if they are afforded the chance to learn.

“We in the Caribbean, with limited resources, have produced some of the best athletes internationally,” he said, describing the community’s excitement to cheer on the most recent cohort of VI athletes in the Olympics. “It drives that kind of passion.”

The VI already has some notable athletes who cycle competitively, including Darel Christopher Jr., who joined the Métropole pro team in France earlier this year.

Mr. Jones said he is excited to see the VI will also be hosting the Caribbean Mountain Bike Championship this fall.

“The BVI has a terrain that lends itself to mountain biking,” he said, adding that Belmont is particularly well suited to the sport.

The territory poses some challenges to cyclists with its steep hills, occasionally narrow roads, and lack of bike lanes. But he said cycling is an excellent way to exercise some freedom after a long two years of living in a pandemic.

He also encouraged anyone looking to find company out on the trail to check out the BVI Mountain Bike Club on Facebook.

Even those who don’t pursue competitive cycling stand to benefit from the sport’s health benefits, Mr. Jones said, adding that routine exercise like biking can improve cardiovascular health and reduce the risk of diabetes.

He said he was prompted to start providing lessons to help people of all ages face any fears of trying cycling in the first place.

This summer, he plans to offer an “adventure bike camp” that features cycling, hikes and other outdoor activities. Mr. Jones said he believes in the importance of creating opportunities for kids to get outside, explore, and learn something new.

Kay Peters agreed as she watched Caleb describe some of the bike tricks he hopes to one day do himself. She said he also enjoys practising martial arts and baseball, and she is happy to encourage him in learning new skills through biking, including dedication and teamwork.

Ms. Peters said she would like to see the sport popularised, especially since it can help prevent obesity and give kids more opportunities to play.

To that end, Mr. Jones said he will be working with members of the Youth Empowerment Project to fix up bikes for kids to use, and he welcomes community support to help make cycling accessible.

Cycling is a healthy pastime, but Mr. Jones said it is important to also adhere to safety guidelines. Staying alert on roadways is imperative, he added, noting that wearing bright reflective clothing can make cyclists easier to spot.

He reminded cyclists to also always wear secure shoes, a helmet — a requirement for his classes — and possibly gloves and elbow/knee pads.