BVI Finance has clapped back after the Virgin Islands topped a list of the “most corrosive corporate tax havens” in the world published last week by the Tax Justice Network. …

END_OF_DOCUMENT_TOKEN_TO_BE_REPLACED

BVI Finance has clapped back after the Virgin Islands topped a list of the “most corrosive corporate tax havens” in the world published last week by the Tax Justice Network.

In the new report, the TJN strongly condemned the United Kingdom and its network of “satellite jurisdictions,” including the VI, suggesting they bear the lion’s share of responsibility for undermining the global corporate tax system.

“The hypocrisy revealed by the Corporate Tax Haven Index is sickening,” said Alex Cobham, chief executive at the TJN. “A handful of the richest countries have waged a world tax war so corrosive they’ve broken down the global corporate tax system beyond repair.” 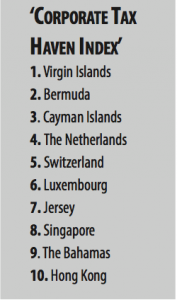 The report adds, “That’s four times more than the next greatest contributor of corporate tax avoidance risks, the Netherlands, which accounts for less than seven percent.”

Bermuda and the Cayman Islands, which like the VI are UK overseas territories, appeared at number two and three, respectively. While the UK ranks 13th on the index, its territories dominate the index, while the Netherlands and Switzerland round out the top five.

Nearly $6 trillion, or 14 percent, of foreign direct investment reported by the International Monetary Fund is facilitated through the UK network, where the lowest available corporate tax rates averaged 1.73 percent, according to the report.

On Monday, Elise Donovan, chief executive officer of BVI Finance, responded to the index, claiming the TJN “specifically cherry-picked the criteria they examined in order to paint a negative picture of the BVI.”

She countered by citing the 2017 Capital Economics report, which claimed that the VI mediates $1.5 trillion of investment globally and that companies based here contribute approximately $15 billion in tax annually to governments around the world.

The index found that 10 jurisdictions are responsible for over half of the world’s corporate tax avoidance risks, representing two-fifths of global foreign direct investment reported by the IMF. The lowest available corporate tax rates in these jurisdictions averaged 0.54 percent.

That, in turn, the report predicted, would cause more tax revenue to drain away from across the globe as the jurisdictions engaged in a “race to the bottom.”

Ms. Donovan, however, said that the VI adds, rather than drains, value from the global economy and is working to fight tax evasion.

“We have worked closely with the UK and numerous international bodies over many years to tackle tax evasion, meeting and often exceeding global standards and maintaining our position at the forefront of innovation in the fight against financial crime,” she said.

The index, according to the organisation, was the first-ever study of its size and scope, and it ranked each jurisdiction based on the degree to which it enables corporate tax avoidance, combining the score with the scale of corporate activity in the country to determine its final rank on the scale.

The TJN also annually publishes the Financial Secrecy Index, which ranks jurisdictions according to secrecy and the scale of their offshore financial activities. The VI appeared in 16th place on that index for 2018.

The TJN is an international organisation launched in 2003 and registered in the UK, claiming to be “dedicated to high-level research, analysis and advocacy in the area of international tax and financial regulation.”