On June 11, two Virgin Islands construction firms were awarded contracts totaling more than $3 million for the Long Bush reservoir and for managing the design and construction of the …

END_OF_DOCUMENT_TOKEN_TO_BE_REPLACED 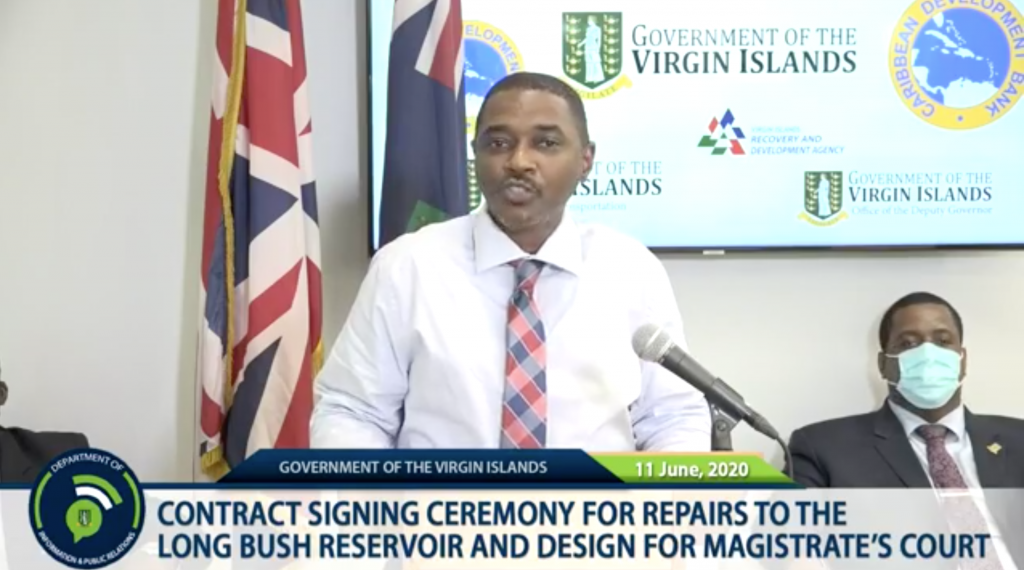 On June 11, two Virgin Islands construction firms were awarded contracts totaling more than $3 million for the Long Bush reservoir and for managing the design and construction of the new Magistrates’ Court building.

Autland Heavy Equipment Limited will be paid $2,208,98.40 to rebuild the Long Bush reservoir, which will include the construction of a water tank, a neighbourhood distribution system, and the restoration of kerbs and roads affected by construction works, Recovery and Development Agency Head of Procurement John Primo said at the Friday contract signing at the RDA.

For the court project, he added, Trojan Design and Development Limited was awarded a $324,840 contract to provide architectural and construction management services from the planning phase to the handover of the completed building.

The RDA oversaw the procurement processes, which were carried out in accordance with Caribbean Development Bank procurement policy, Mr. Primo said, adding that both projects will be financed by a CDB loan obtained to rebuild the territory after Hurricane Irma.

In keeping with CDB guidelines, bid invitations for the Long Bush project were published on the CDB and Government Information Services websites and advertised in local newspapers, while requests for proposals for the Magistrates’ Court consultancy were sent directly to a CDB-approved shortlist of six local firms, Mr. Primo said.

Autland was selected as the most “responsive” company out of the two that bid for the Long Bush project, according to Mr. Primo.

For the court consulting job, he added, five proposals “were received by the submission deadline, and following detailed technical and financial evaluations Trojan Design and Development Limited was determined to be the highest ranked firm, and therefore was recommended by the RDA and approved by the CDB for the award of contract.”

Once completed, the new Magistrates’ Court will be much more than a courthouse, said Deputy Governor David Archer Jr.

Mr. Archer applauded Trojan for taking on such a complex consulting contract, as the company will have to engage “stakeholders galore” as it oversees the design and construction of a building that is both energy-efficient and storm-resistant.

Trojan representative Ronnie Lettsome said the company is up to the task.

“I’d like to thank the deputy governor and the RDA for their support, and we’re looking forward to providing a design that everyone is going to be proud of,” he said.

This is a point of pride for Premier Andrew Fahie, who called on Virgin Islanders to follow in the footsteps of those who came before them and take a leading role in building the territory’s economy.

“As a leader, and as a government, you have to have faith in your people,” Mr. Fahie said, adding, “Our people can do the work. Our people can build this economy. Our foreparents did it before, and we can do it again.”

Mr. McMaster said he is also proud of how quickly the agency has bounced back from the recent pandemic lockdown to inject cash into the economy.

However, noting that only two companies had thrown their hats into the ring for the Long Bush reservoir, he called on increased participation from residents in powering the territory’s ongoing recovery from the 2017 hurricanes.

“I will continue to provide as much notice, as much PR, as possible, to ensure that persons are aware of the opportunities, and hopefully … we will have more local companies, consultants, contractors, project managers all on board,” Mr. McMaster said.

Despite the apparently limited interest in the Long Bush project, Mr. McMaster is optimistic that more young residents will pursue opportunities to work in construction, and he applauded Dion Crabbe of Autland for mentoring young residents curious about careers in the field.

Urging any companies aspiring to work on an RDA project to follow through, Mr. McMaster said, “Do not get discouraged if you have submitted a bid or haven’t submitted a bid. Because remember, if you don’t try, then you cannot succeed.”

During his speech, Mr. Fahie pointed to the restructuring of the Recovery to Development Plan and the new terms of the CDB loan, which he claimed he renegotiated, as key factors in how swiftly the construction industry has begun to dig itself out of the post-Covid slump.

“By successfully renegotiating the terms with the CDB, our BVI workers and businesses can get a vitamin boost from this money,” the premier said.

But it is unclear how, exactly, the terms of the CDB loan have changed since it was first obtained by the previous administration in 2018:By press time, Mr. Fahie could not be reached for comment, after instructing this reporter to schedule an interview with Communications Director Arliene Penn.

The $65 million “Recovery and Reconstruction” loan was granted in March 2018 to the previous administration led by then-Premier Dr. Orlando Smith, although his administration had initially requested $500 million from the financial organisation.

However, government encountered apparent difficulty using the loan to finance recovery projects, as the administration had only charged $2.4 million to construction contracts by the following December, Dr. Smith disclosed during a meeting of the House of Assembly that month.

In May 2019, after Mr. Fahie’s Virgin Islands Party came to power, Mr. Fahie said that outside of the RRL, no additional loan funding for disaster recovery had been obtained from the CDB.

But the RRL loan was only intended as a sliver of the total allotment for financing the VI’s recovery.

Before previous RDA CEO Paul Bayly resigned in February, Mr. Fahie frequently clashed with Governor Gus Jaspert over the details of a £300 million loan guarantee offer from the United Kingdom that was intended to fund much of the RDP, which was significantly scaled down by Mr. Fahie’s administration.

Before he became premier, Mr. Fahie voted to accept the loan guarantee in 2018, but after taking office he frequently rebuffed Mr. Jaspert’s urgings to take the steps needed to secure the guarantee, arguing that the conditions of the deal were too stringent and that he would continue negotiations with the UK.

The original RDP was projected to cost a total of $580.8 million, while the revised version Mr. Fahie’s administration sent to the UK last September estimated financing needs at $186.9 million.

At the time of Mr. Bayly’s resignation, the RDA had spent only $9 million to complete five projects, but several other projects have been launched since then, and in last Thursday’s remarks, Mr. Fahie said he was confident that with Mr. McMaster at the wheel and the CDB loan conditions apparently more favourable to the VI, the agency would operate with increased efficiency in this “new regular.”

“So indeed, today with the signing of the contracts signalled yet another victory for the BVI as we steadily move forward with our hurricane recovery efforts,” Mr. Fahie said.