The future holds many possibilities for the governance of the Virgin Islands, and one expert said last week that the territory has a solid foundation for exploring ways to take …

END_OF_DOCUMENT_TOKEN_TO_BE_REPLACED 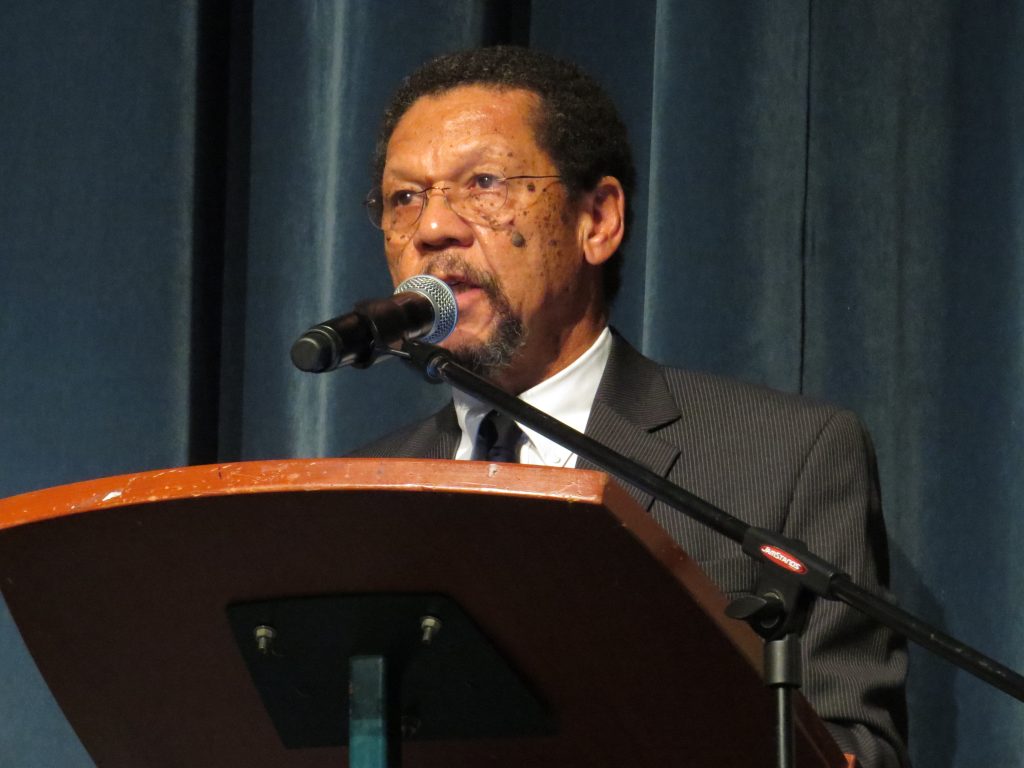 Dr. Carlyle Corbin, an international advisor on governance, said on March 31 that his assessment of the Virgin Islands’ capability to govern itself showed promise. (Photo: DANA KAMPA)

The future holds many possibilities for the governance of the Virgin Islands, and one expert said last week that the territory has a solid foundation for exploring ways to take more control of its own affairs.

Dr. Carlyle Corbin, an international advisor on governance, recently was hired by the government to assess the territory’s ability to self-govern.

His full report has not yet been shared publicly, but he explained his findings on March 31 during a lecture at H. Lavity Stoutt Community College, where he reviewed the history of territories seeking independence and analysed the VI’s various strengths and weaknesses should it follow a similar path.

“The idea of moving to another status does not mean that you are separating, or that you are turning your back, or all these other various terms that you know people often use for the purposes of fear,” he said. “Whenever an arrangement is made, whatever change is made at this stage, it is really an evolution. It’s simply the matter of a next step.”

Dr. Carolyn O’Neal-Morton, permanent secretary in the Premier’s Office, said government commissioned the report so the public could gain a better understanding of the historical context for constitutional development.

“It is hoped that by having access to the information contained in the self-governance assessment, the public will be better able to engage in the constitutional review process,” she said in a press release on March 29.

Dr. Corbin is the creator of the “self-governance indicators diagnostic tool” used to gauge territories’ readiness for decolonising based on 11 key measures of economics, law and international relations. Most recently, he had conducted assessments for Curacao, French Polynesia, Norfolk Island and Guam.

Overall, Dr. Corbin awarded the territory 26 out of 44 possible points for how easily the VI could self-govern given its current circumstances.

The territory could score a possible four points for each of 11 criteria, which included the capacity to independently write an internal constitution; the control of justice systems in the territory; and autonomy in economic affairs.

The only one-point score came for the VI’s participation in UK politics. However, he noted this isn’t necessarily a bad thing considering that UK ministers have proposed such involvement in the past, but very few territories showed interest in participating.

“The most appropriate step in the process of political and constitutional evolution is a genuine and irreversible devolution of power via a transition to one of the permanent political status options of absolute political equality,” he said.

Dr. Corbin also laid out the three main paths for a territory to decolonise: independence, free association, and integration.

He noted that the United Nations requires administering countries to work toward helping their territories decolonise, and that the subject of self-governance has played a central role in recent discussions of the territory’s pending constitutional review.

During the talk on March 31, Shaina Smith-Archer, host of The Vigilate Dialogues, moderated questions from the audience in person and online.

Some participants asked how a referendum or general election vote on autonomy would come about.

Dr. Corbin said there are several options, but key to successful decolonisation efforts is a united voice from the people in the territory in expressing what they want for the future.

He encouraged entities like HLSCC to continue educating the public about self-governance and all it entails.

The lecture was a collaboration between the government’s International Affairs Secretariat and HLSCC’s VI Studies Institute.