Past and present collided as some of the Virgin Islands’ brightest minds looked back on history’s change-makers during the inaugural Heroes and Forefathers Day on Oct. 18, drawing comparisons between …

END_OF_DOCUMENT_TOKEN_TO_BE_REPLACED 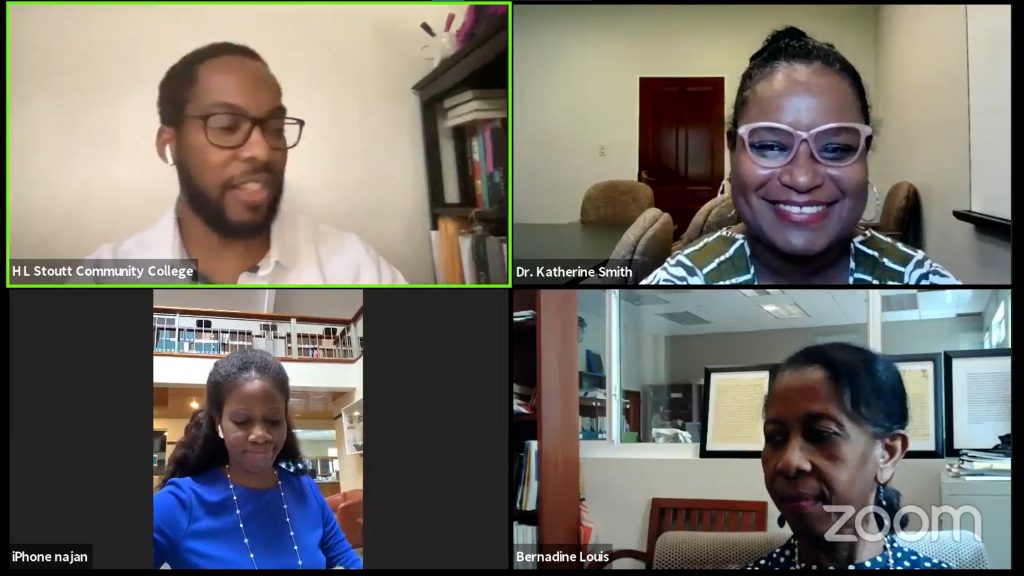 Historians and others drew parallels between contemporary and historic challenges while recognising the first ever Heroes and Forefathers Day on Oct. 18 during a virtual panel discussion. (Screenshot: FACEBOOK)

Past and present collided as some of the Virgin Islands’ brightest minds looked back on history’s change-makers during the inaugural Heroes and Forefathers Day on Oct. 18, drawing comparisons between the challenges those famous figures overcame and today’s unpredictable hurdles.

The holiday replaced the formerly celebrated St. Ursula’s Day amid a large-scale changeup of national holidays intended to better reflect VI culture and history.  Cabinet recently decided to rename it “Heroes and Foreparents Day” next year to be more inclusive.

On Oct. 18, the VI Studies Institute and Department of Culture brought together a virtual panel of experts on the territory’s historical figures to examine the “flashpoints in the timeline of the Virgin Islands” where heroes pushed for progress, as described by host H. Lavity Stoutt Community College President Dr. Richard Georges, who is also the territory’s first poet laureate.

Who is a hero?

The panellists first discussed who should be celebrated on the public holiday.

Dr. Georges suggested that a national hero is not just a contributing member of society, but someone who goes above and beyond to be a champion for the people of the territory.

Director of Culture Dr. Katherine Smith said national heroes can often be found at the centre of moments in history when the VI made significant leaps in progress.

“When you have those kinds of big moments, you always have leaders who have stepped out; they stepped up; they represented; they took leadership; they gave of themselves; and they spoke for the people at the time,” she said.

Those leaders often helped give a voice to others who could not speak for themselves, said VI Communal Association Vice President Dr. Harlan Vanterpool.

From the Premier’s Office, International Affairs Secretariat Director Najan Christopher noted that sometimes these historical moments can be laden with pain and somewhat difficult to revisit. But she said it’s important to take the time to recognise the people upon whose shoulders today’s community members stand.

While discussing heroes, the panellists examined some key points in history, including the plantation era, the territory’s most famous insurrections, and the years after emancipation.

Dr. Georges took the discussion back to 1811, when plantation farmer Arthur Hodge was hanged for murdering an enslaved man named Prosper.

“It is important to note that Arthur Hodge’s crimes weren’t constricted to the year 1811,” Dr. Georges said. “It was more of a compilation of atrocities that leads to this execution of a planter for the murder of an enslaved man.”

Dr. Smith said the hanging is the only case on legal record throughout the region of a planter being executed for murdering an enslaved person, which she noted wasn’t illegal around that time. She said this execution was made even more surprising by the fact that Mr. Hodge was a VI Executive Council member.

His crimes included the extraordinarily cruel murder of about 100 people in the span of a few years, Dr. Smith said. She commended historical figures brave enough to come forward and testify to the atrocities Mr. Hodge committed, particularly Perreen Georges, a free black woman. Her testimony was a “very seminal moment which defined the enslaved person’s life as valuable and having meaning,” Dr. Smith said, drawing attention to the fact that although Ms. Georges was technically free, her freedom was tenuous.

“This is a courageous woman here, an articulate woman,” she said. “You can see the respect that she commanded.”

On this new holiday, Dr. Georges said he was glad to shed a spotlight on the bravery of witnesses who are often overshadowed in the history books by the plantation owner and the terror he wrought.

Ms. Christopher added that the witnesses’ actions had a ripple effect throughout the entire Caribbean, sending a clear message to plantation owners that “black lives do matter, if you will.” After the trial, she said plantation owners also started keeping more detailed registers and better accounts of when enslaved people went missing, documents she said historians now use as valuable tools to track genealogies.

Moving ahead to 1831, the historians contemplated how plans for revolt led by Shelly Martin and others shook the foundations of oppressive forces. Though the plans for escape were discovered and thwarted, Ms. Smith said the episode sparked a unified revolutionary spirit. She added that this insurrection, modelled after a successful uprising in Haiti, was historic in how it aimed not only to rebel against the conditions of slavery, but also to work toward the widespread liberation of a nation.

The cattle tax riot then came in 1853 as remaining residents worked to build up the VI basically from scratch, Dr. Georges said.

The Legislative Council had raised the cattle tax by 50 percent, leading to acts of civil disobedience by the labour class and eventually a riot on the 19th anniversary of emancipation that burned down most of Road Town. Multiple organisers were executed.

A health crisis arose at the same time, when cholera killed nearly 1,000 Virgin Islanders, he said.

Privy Council member Thomas Cooke worked with organiser Augustus McCleverty, who became the “voice of the labourers” against a levy that taxed the poorest, Dr. Georges said.

Ms. Smith said Mr. McCleverty bought his freedom from enslavement at the age of 26, and later in life he was appointed to the Legislative Council.

“It just goes to show us that the folks in those days, they did not put up with anything,” said Ms. Louis. “Cattle and livestock, being an agricultural society, was their livelihood. Here it was again, those in control trying to bring them down. They stood up for that injustice.”

She said the VI Studies Institute is working to document the whole ordeal in one publication.

The panel also lauded the selection of Fredrick Augustus Pickering as the first black Virgin Islander to serve as president from 1884 to 1887.

Dr. Georges said these were only some of the many inspiring moments from VI history deserving of greater recognition.

In the modern era, he said H. Lavity Stoutt, Noel Lloyd and others are well-known names for good reason, shaping the way we think of how the territory developed into what it is today.

On Nov. 8, the commemoration of the Great March of 1949 and restoration of the Legislative Council will be celebrated as a public holiday for the first time ever.

Where do we go?

The panel ended with questions from viewers at home.

One asked what needs to be done now to keep on track with the territory’s historical leaps in progress.

Ms. Christopher said the Covid-19 pandemic mirrors the “global defining moment” seen after World War II, and looking to the past can help with charting the future course.

“For everything that we’re facing today, there could possibly be a narrative that is being imposed upon us by different events such as Covid-19,” Ms. Smith added. “The important thing, as we’ve just done, is to read through records in the past and construct our own narrative … from our perspective and our own lived experience and our own sources.”