For more than five decades, the United States imposed sanctions against Cuba, restricting trade, investment and movement between the countries.   That is changing, and the Virgin Islands and the …

END_OF_DOCUMENT_TOKEN_TO_BE_REPLACED 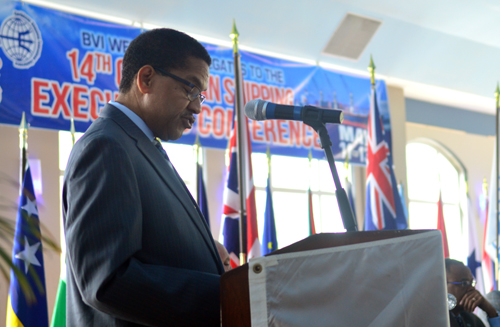 For more than five decades, the United States imposed sanctions against Cuba, restricting trade, investment and movement between the countries.

About 40 members of the organisation met at the Crystal Ballroom at U.P.’s Cineplex for the Caribbean Shipping Executives Conference, which concluded yesterday.

Delegates from around the region were scheduled to discuss various issues affecting the shipping industry in the Caribbean, according to CSA President Grantley Stephenson.

But during the opening ceremony, Mr. Stephenson spoke most extensively about the possible opportunities opened by the loosening of restrictions on US-Cuban relations.

“The easing of some of the sanctions that have been in place for nearly 55 years has effectively opened up new trade paths for the entire year,” Mr. Stephenson said.

For example, several ferry companies in Florida have shown an interest in obtaining licences to operate between Florida and Havana, he explained.

“We must continue to assess its impact and benefits to strategically prepare for the projected challenges and economic benefits,” Mr. Stephenson told the attendees.

Also during the conference, members were scheduled to strategise on ways of meeting shipping demand in the region.

“I want to begin by applauding the Caribbean Shipping Association for its efforts since 1971 to facilitate the development of the regional shipping industry,” he said.

The minister added that he hopes the partnership between the executives will continue.

“With our Caribbean islands as strategically positioned as they are in this part of the world, it is definitely to our benefit to work together to maximise these advantages, as it relates to trade, travel and transport,” he said.