On Monday for the first time in recent memory, voters didn’t have to wait until the early morning to hear all the winners of the general election. By about 10:30 …

END_OF_DOCUMENT_TOKEN_TO_BE_REPLACED 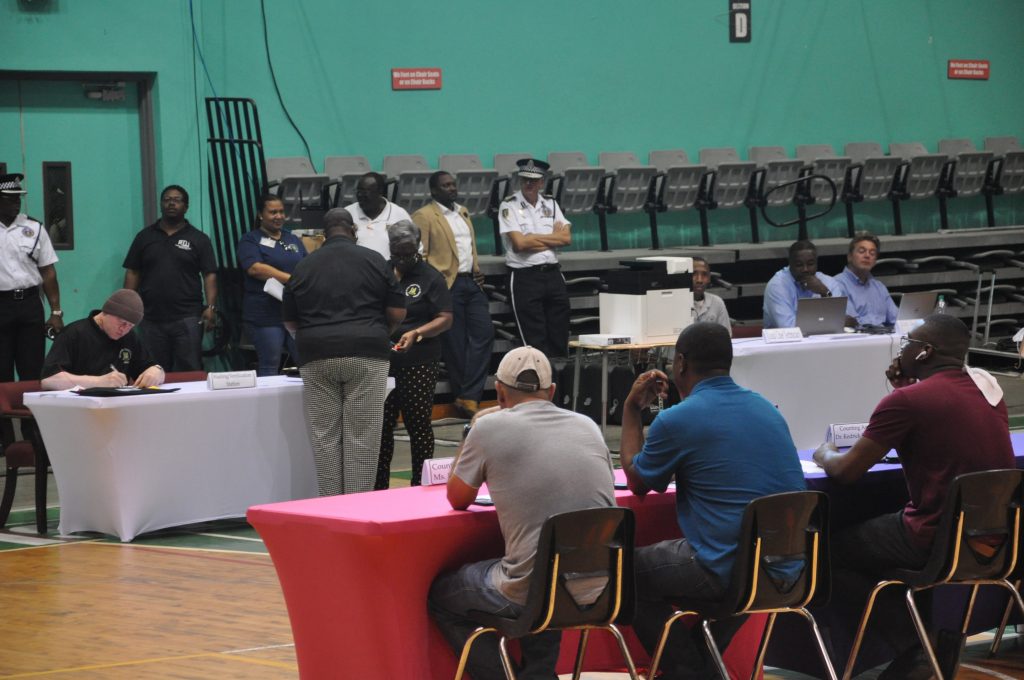 Results from all districts were counted and announced at the Multi-purpose Sports Complex on Monday night. The count finished less than five hours after polls closed. (Photo: FREEMAN ROGERS)

On Monday for the first time in recent memory, voters didn’t have to wait until the early morning to hear all the winners of the general election.

By about 10:30 p.m. — less than five hours after the polls had closed — all results had been counted and announced, and the Virgin Islands Party was declared the overall victor.

Electronic vote-counting machines, which eliminated the need to tediously tally votes by hand, were the reason behind the newfound efficiency.

“I’ve been working elections for almost 18 years and this is the smoothest transition I have ever seen,” said Willie Wesley, the director of business development at Election Systems & Software, which oversaw the operation of the voting machines. “What just happened here in BVI in my mind is historic.”

Earlier this year, lawmakers passed amendments to the Elections Act, which officially ushered in the new voting equipment and procedures.

In previous elections, results would trickle in one by one from the districts before at-large winners were announced. This year, thumb drives and paper printouts of the vote totals were brought to the Multi-purpose Sports Complex — the de facto election epicenter — before the results were counted and announced in one place starting at about 9 p.m.

Mr. Wesley added that dedicated poll workers who attended multiple training sessions on the new technology were also a driving force behind the smooth transition from hand-counting to electronic tabulation. 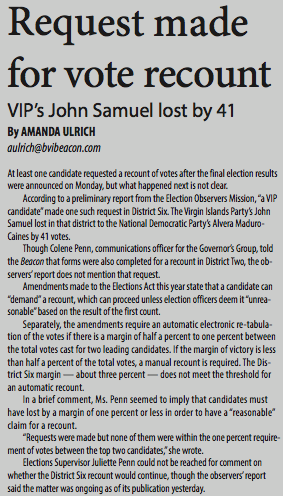 “The election they had yesterday was almost flawless,” he said on Tuesday.

Election officials agreed that, by and large, Polling Day went according to plan.

“We had the normal things, but no major issues at all,” said Elections Supervisor Juliette Penn. “We had a delay from Virgin Gorda, but you would expect that, because they’re traveling by boat.”

Mr. Wesley reported that one slight hiccup on Monday involved someone accidentally taking one of the plugs for a voting machine out of the wall. The machine ran on a battery for over four hours before dying, but officials merely plugged it back in afterwards and continued the voting process.

“That was really more of an inadvertent mistake,” Mr. Wesley said.

In Sea Cows Bay, one machine would not accept ballots. Mr. Wesley said he went down to the polling station to switch out the machine with another.

“We did have a spare machine at every location in case something like this happened,” he said. “We basically just swapped the machine out with the same election data.”

One candidate, however, muddied the situation by arguing against using an “emergency ballot bin,” which Mr. Wesley said is officials’ plan B if a machine malfunctions.

“We don’t want to keep people from voting just because the machine isn’t working,” he explained.