Dr. Richard Georges, the acting president of H. Lavity Stout Community College, has always viewed the Bocas Prize for Caribbean Literature as a special award. Many literary contests are only …

END_OF_DOCUMENT_TOKEN_TO_BE_REPLACED 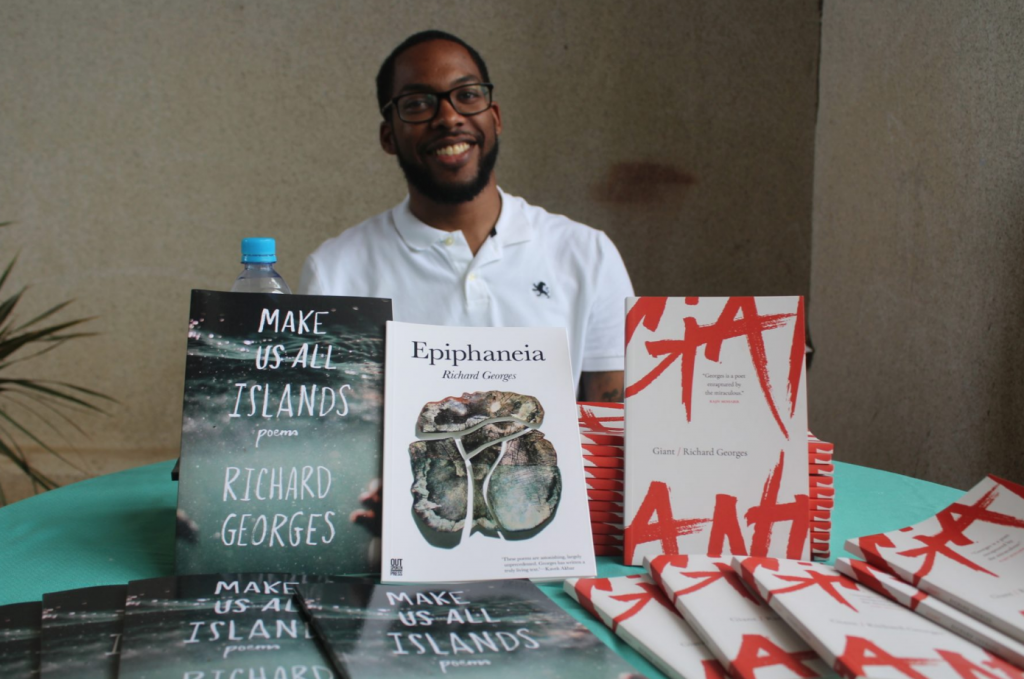 Dr. Georges’ most recent selection, Epipheaneia, has won the poetry category for the One Media Caribbean Bocas Prize. The book is now competing with a fiction collection and non-fiction book for the overall award of $10,000 considered by many the most prestigious literary prize in the region. (File Photo: ZARRIN TASNIM AHMED)

Many literary contests are only open to books published in-country, but the Bocas Prize considers works of fiction, non-fiction and poetry by any writer born in the region or holding Caribbean citizenship.

So Dr. Georges was grateful when he first learned that Epiphaneia, his book of poems written in the aftermath of Hurricane Irma, won the poetry category of this year’s prize, he said.

Now it will compete with two other books for the top award of $10,000. Also in the running are Everything Inside, a collection of short fiction by Haitian-American writer Edwidge Danticat, and the nonfiction book Shame on Me, by Guyana-born Tessa McWatt, who was raised in Canada and is based in the United Kingdom.

“It was a bit of a surprise to be on the shortlist: … surprise and gratitude,” Dr. Georges said.

Winning acclaim is never his motivation for writing, he said, adding that his work would probably suffer if that were the case.

Nonetheless, given all the hard work that goes into writing literature or making any art, creative people do value the validation of being acknowledged by such prestigious contests, he said.

“It is encouragement to continue with what is often a thankless and not very profitable endeavour,” he added.

Whether or not Dr. Georges wins the overall prize in early May, he is happy to be shortlisted among writers whom he respects, he said.

Set in the aftermath of Hurricane Irma, Epiphaneiais the latest of Dr. Georges’ three poetry collections, and it explores the landscape and history of the territory, he told the Beacon last year.

Describing Dr. Georges’ book, publisher Outspoken Press, wrote: “Beyond the loss and devastation that such a natural disaster brings, Georges’ ideas span beyond the physical world, asking us to consider the ways in which families and communities come together amidst such tragedy.”

Dr. Georges currently keeps a busy schedule, but he has been writing short stories and essays when he finds the time, he said.