Featured articles > VI praised by US on tsunami preparations

VI praised by US on tsunami preparations

An American government agency has applauded the Virgin Islands for its preparedness in the event of a tsunami, officials said. The United States National Weather Service granted the VI the …

END_OF_DOCUMENT_TOKEN_TO_BE_REPLACED 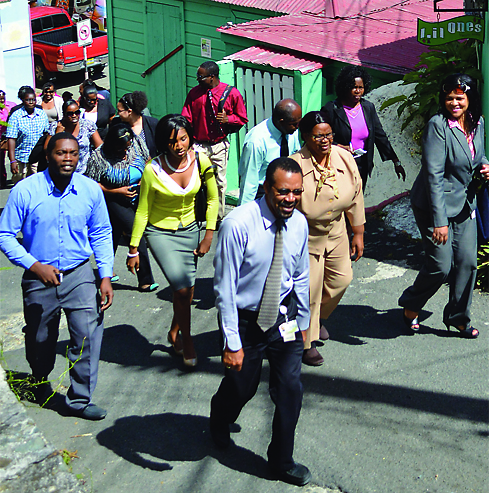 Residents make their way up hill during a tsunami drill on March 26. File photo: NGOVOU GYANG

An American government agency has applauded the Virgin Islands for its preparedness in the event of a tsunami, officials said.

The United States National Weather Service granted the VI the distinction “Tsunami Ready” after a team of officials reviewed the territory’s preparations, particularly measures taken to promote the safety of residents and visitors in vulnerable areas, according to Government Information Services.

Governor Boyd McCleary, whose remit includes disaster preparedness, recently received a letter from the NWS congratulating the territory for the distinction.

“I am delighted to learn of the recognition that BVI is a Tsunami Ready jurisdiction,” he said. “This is a tribute to the sterling work over many years by the staff at the Department for Disaster Management, who deserve our thanks and warm congratulations.”

Assessors from the NWS were particularly impressed with the new tsunami evacuation signs and the VI’s ability to communicate in the event of a disaster, according to GIS.

“The evacuation maps have been prepared and this is an excellent tool because it specifically addresses where the threat areas are and which are the safe locations,” said Christa von Hillerbrandt-Andrade, a manager with the NWS. “It is very gratifying and you are very fortunate in the BVI to have a lot of places to run to; there is a lot of high ground in most of the territory, although there are challenges in places like Anegada where there is not much high ground.”