In January 2019, Dr. Marilyn Brandt, a research associate professor at the University of the Virgin Islands, scuba dived among a patch of coral near the airport in St. Thomas. …

END_OF_DOCUMENT_TOKEN_TO_BE_REPLACED 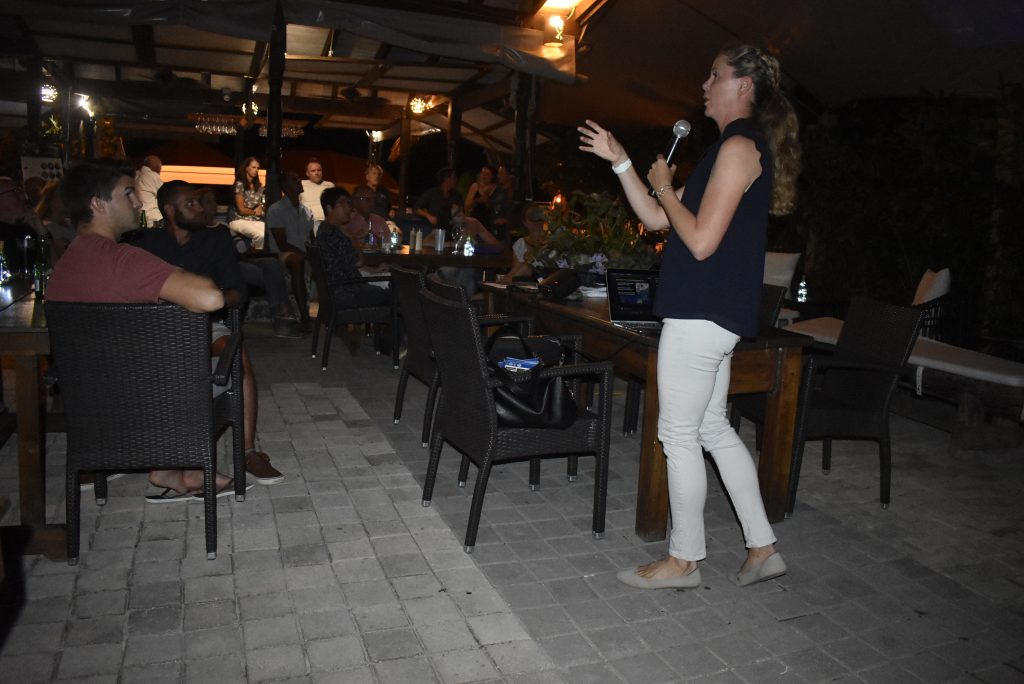 Dr. Marilyn Brandt, a research associate professor at the University of the Virgin Islands, described how community engagement is key to combating the stony coral tissue loss endangering reefs throughout the Caribbean. (Photo: JOEY WALDINGER)

In January 2019, Dr. Marilyn Brandt, a research associate professor at the University of the Virgin Islands, scuba dived among a patch of coral near the airport in St. Thomas.

She had heard that the corals in the area were discoloured, and she suspected they had contracted a disease that originated off the coast of Florida in 2014 and had spread as far as St. Maarten, devastating underwater ecosystems along the way.

Her fears were confirmed. In her career of studying coral disease, during which she had logged about 1,500 dives, she had never seen a level of disease that high, she said.

“My heart pretty much sank when I got in the water and saw this,” she said.

The reef had been stricken with stony coral tissue loss disease, which attacks the algae living inside the coral’s tissue and causes white lesions.

Compared to other ailments, the relatively new disease has an extremely high mortality rate and affects a wide range of species, and it is rapidly spreading through the Caribbean.

During a talk on Saturday at the Bamboushay Lounge in Road Town, Dr. Brandt told a crowd of about 30 people that the disease could reach this territory’s waters within the next year, if it is not already here.

To prepare for the inevitable arrival, Dr. Shannon Gore, managing director of the non-profit Association of Reef Keepers, organised the Saturday meeting, where Dr. Brandt and a community outreach coordinator from the USVI spoke about their efforts to contain the disease, and how residents here can employ the same strategies to help limit its potential damage to VI reefs.

The best way residents can help is by studying the disease and keeping an eye out for potential symptoms when diving among coral, according to Kitty Edwards, education and outreach coordinator for the USVI Department of Planning and Natural Resources’ Coastal Zone Management Division.

Anybody who does encounter possible outbreaks should share their information by emailing Dr. Gore pictures of the coral as well as the date, location and details of the sighting, Dr. Gore said.

“We are not asking you to be coral disease experts: We’re just looking for pictures of the reef. So if you see bright white spots, take a picture of it, send it in, let us know if you’re seeing something weird,” Ms. Edwards said.

If a report comes in that seems to indicate an outbreak, scientists will examine the site and possibly apply a treatment — amoxicillin mixed with a paste that scientists put inside a syringe and then “press into the coral,” Dr. Gore said.

As this delicate process can seriously harm the coral if done incorrectly, Dr. Gore was wary of explaining the details out of concern that non-scientists will attempt it themselves, she said.

Though this method can stave off death, Dr. Gore could not say for how long: Much about the disease is unknown, including its possible mutations and reactions to different coral species, she explained.

In Florida, scientists are studying a probiotic that appears to stop the disease entirely when applied to infected coral, but this research is still in its early stage, Dr. Gore said.

Residents are encouraged to send in reports of flourishing coral as well, Ms. Edwards said.

“First of all, we want to know where the disease is not. That lets us know if it has not reached a certain area and it helps us to build a timeline of how the disease is moving,” Ms. Edwards said, adding, “For our emotional well being, we really want to see healthy corals too.”

But the appeals for community support didn’t end there. Drs. Brandt and Gore and Ms. Edwards welcomed assistance from anyone compelled to help in any capacity, be it graphic design, community organising, or something else.

Combating the disease is a costly battle that is mostly being fought with grant money and donations, the officials said.

Dr. Gore obtained a donation from the law firm Carey Olson to bring Dr. Brandt and Ms. Edwards over from St. Thomas, and a grant from the Governor’s Office helped assemble educational materials, she said.

After the presentation, Dr. Gore sold disease identification kits, and will use the profits to buy more of the treatment, she said.

Briefly addressing the crowd, Natural Resources, Labour and Immigration Minister Vincent Wheatley said he was alarmed by the severity of the disease and is committing to helping shield the territory from its spread.

“I assure you, government will do all that we can to assist in these efforts,” Mr. Wheatley said.

Even with assistance, the challenge is substantial, Dr. Brandt said.

She pays roughly $50 per jar of treatment, and estimates that it costs $4 to treat one piece of coral.

As a preventative measure, coral likely to be infected can be removed from the ocean, but storing it and putting it back in its original spot presents a bevy of logistical issues, Dr. Brandt said.