Darryl Flanders’ stomach began to sink as he watched footage of Hurricane Dorian wreaking havoc on the Bahamas earlier this week. He recalled the hopelessness of Hurricane Irma’s aftermath two …

END_OF_DOCUMENT_TOKEN_TO_BE_REPLACED 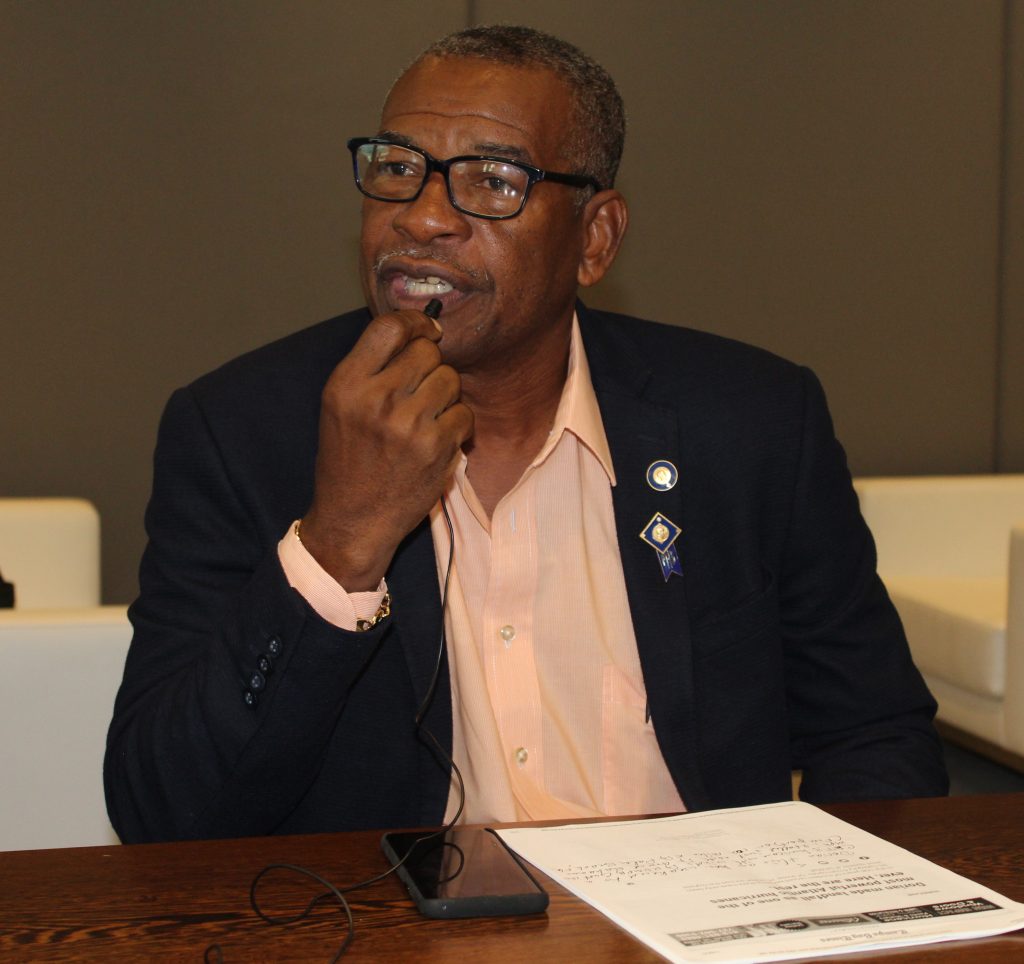 Vance Lewis, President of the Rotary Club of Tortola, said that Rotarians want to raise $50,000 to donate to the Bahamas’ recovery. (Photo: JOEY WALDINGER)

Darryl Flanders’ stomach began to sink as he watched footage of Hurricane Dorian wreaking havoc on the Bahamas earlier this week.

He recalled the hopelessness of Hurricane Irma’s aftermath two years ago in the Virgin Islands, and knew he had to help. He began circulating messages through social media, inviting people to join him in giving to the Bahamas. Eventually he decided that organising a donation drive for emergency materials would be the most effective course of action.

So he pitched his plan to a friend at ZBVI Radio, who agreed to use the station’s Baughers Bay office as a collection point for the supplies.

“We were there two years ago … so why not pay it forward,” he said. “It’s our brothers and sisters that need our help.”

Mr. Flanders’ initiative is one of several in the VI that have launched since Dorian made landfall on Sunday in the low-lying Abaco islands in the Bahamas.

In the days since, the Category 5 hurricane flooded the northern part of the commonwealth with a 15-to-20-foot storm surge, killing at least seven, incapacitating recovery vehicles, and laying waste to thousands of homes and other buildings.

As of press time, it was headed for the southeastern United States, which is bracing for the worst.

In addition to Mr. Flanders’ supply drive, the territory’s Rotary clubs are hosting a telethon on Tuesday to raise funds for the recovery, and two VI government officials have been deployed to the Bahamas to assist with on-the-ground operations.

The Rotary telethon will be held at 5:30 p.m. at Maria’s by the Sea Hotel, while anyone interested can donate supplies atZBVI Monday through Friday from 9 a.m. to 4:30 p.m., pend-ing further notice.

“We need to put ourselves in their shoes,” said Lynette Harrigan, immediate past president of the Rotary Club of Tortola, adding, “They don’t know where the road and the sea meet. Let’s do whatever we can to help the Bahamas.”

This week in the House of Assembly, Premier Andrew Fahie and other legislators also expressed their sympathies.

Mr. Fahie said he spoke on Sunday to Prime Minister Hubert Minnis and offered to share his experiences and best practices from the 2017 storms.

He also urged Virgin Islands nonprofits to collect medical supplies and non-perishable food items for donations. He added that his office is creating a group chat on WhatsApp to keep track of the many Virgin Islanders who live in Florida, which could be hit by Dorian as well .

Mr. Fahie encouraged anyone in the VI with family in Florida to give their names and numbers to the Premier’s Office by calling 468-2152.

The VI relief efforts are still in their early stages, with logistics being finalised as organisers learn more about the storm and its destruction. But already they have yielded results.

The Rotary Club of Tortola has donated $15,000 worth of seed money in preparation for next week’s telethon, whileZBVI has collected extension cords, tarps, clothing, feminine products and other supplies.

“We are all one Caribbean,and we are going to step up, do our part, and help the Bahamas,”Ms. Harrigan said.

ZBVI will continue to accept donations until further notice, but Sandra Potter, ZBVI operations manager, encouraged donors to first check a list of necessary supplies to ensure the materials they give are actually needed.

Mr. Flanders is not yet sure how he will transport the collected materials to the Bahamas, but he is in contact with several NGOs to figure out how to do so, he said.

Meanwhile, the Rotary clubs are focused on raising financial assistance, with a goal of at least $50,000. At a Tuesday press conference announcing their initiative, Vance Lewis, a former Rotary district governor, espoused the organisation’s record in raising and distributing money in the wake of disasters.

“There is probably no organisation as trusted as Rotary … to raise funds and implement them,” said Michael Killourhy, the president of the Rotary Club of Tortola.

Rotarians also plan to revive a GoFundMe account that raised money for the relief efforts following Irma, which will then be distributed to people in the Bahamas, said Ian Smith,the club’s vice president.

While Rotarians and other VI residents donate to the recovery, two government officials are headed over to help out on the ground.

Both officers are expected to remain in the Bahamas for at least a week, though they are prepared to stay longer if necessary, according to the DDM.

Hurricane Dorian first made land fall on Sunday as a Category 5, battering the commonwealth and killing at least seven, according to news reports.

After devastating the Abaco Islands, which were flooded with a 15-to-20-foot storm surge, the hurricane stood nearly still over Grand Bahama on Monday, lashing the island with sustained winds as high as 185 miles per hour, according to reports.

By Tuesday it had been downgraded by the NationalHurricane Center to a Category 2, but continued to move at an unusually slow clip, causing ex-tensive damage.

The New York Times reported,“Dorian’s menace lay in the slowness of its passage: Its heavy rains had more time to produce flooding, its winds more time to batter and weaken structures.”

Citing reports from news outlets and associates in the Bahamas on Tuesday, Mr. Lewis said that a hospital there has been underwater and a police station was flooded, while the ground floor of the islands’ central administration building was completely inundated with water.

Thousands of houses and other buildings in the Abaco Is-ands, which are home to shantytowns inhabited by Haitian immigrants, were destroyed.

As of 5 p.m. Tuesday, the hurricane was moving northwest away from the Bahamas, sending storm surges and hurricane warnings along much of the southeast coast of the United States, according to the National Hurricane Center.