The Virgin Islands will for the first time in its history, host the Central American and Caribbean Age Group Championships on July 1-2, after an agreement was signed by Premier …

END_OF_DOCUMENT_TOKEN_TO_BE_REPLACED 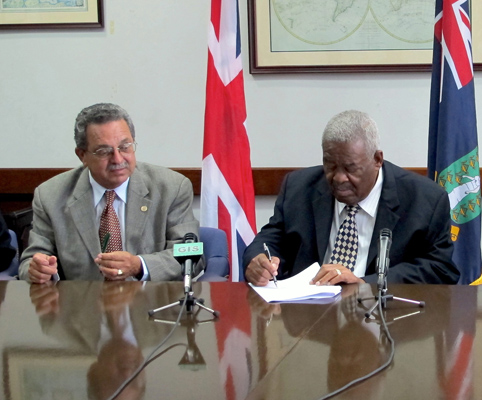 The two-day championships targets 11-12 and 13-14 aged athletes, with each team comprised of eight athletes, two males and two females in each division. “We are expecting this event to be the biggest we’ve had so far,” Mr. Lopez said of the championships that began in 1985. “I’m happy that this event is finally coming to the BVI.”

During his Friday visit to the territory, Mr. Lopez was joined by organisational delegate Evelyn Lopez and technical delegate Carlos Clemente. They toured the competition venue and warm up area, athletes hotel at Prospect Reef and Marias By the Sea, the VIP hotel.

The premier called it  ‘a historic occasion.’  “The government is prepared to take on responsibility for having the CAC Age Group Championships here,” he said. “It is very good we can have these things here in the BVI so that students, young people and all the people here can see what happens when the government goes to work.”

In welcoming the opportunity before signing the contract, the premier said the Department of Youth Affairs and Sports, The Ministry of Education Culture and Sports and the government of the VI, must begin to advertise and promote this event. “We must let the world know, that in the BVI we have this important event and encourage people to come to see what it is like,” he said.

Mr. Greenaway said the championships will expose high cchool juniors and primary school athletes to a multi-sport competition as well as assist the BVI Teachers Union in its identification of athletes for the 2012 CUT Games. He also believes that it will inspire the next generation of athletes who will go on to represent the territory in international competitions.

“The hosting of these championships will also be an excellent tool to educate about the BVI and CAC related competitions and highlight past athletes who have won medals and participated in all levels of CAC competitions, not only in track and field, but in softball as well,” Mr. Greenaway said.  “BVI athletes will be competing against their best regional counterparts and we expect to keep some of the medals at stake because our athletes are being well prepared.”

Leading up to the championships, the next activity will be the training of track officials on March 10-14 during an IAAF TOECS course conducted by Esther Maynard of Barbados.

The VI has participated in all, but one of the CAC Age Group Championships events and have won 12 medals. Dione Blyden was the 10-11 overall boys division winner in 2003.

The CAC Age Group Championships culminates the BVIAA’s 40th anniversary activities. The association was founded on September 19, 1970 and became a CACAC member in 1972. VI athletes began competing in CAC competitions in 1975.