The closely watched United States presidential election proved to be a tight race, as patrons at one watch party in East End noted by cracking jokes about “Dewey wins!,” the …

END_OF_DOCUMENT_TOKEN_TO_BE_REPLACED 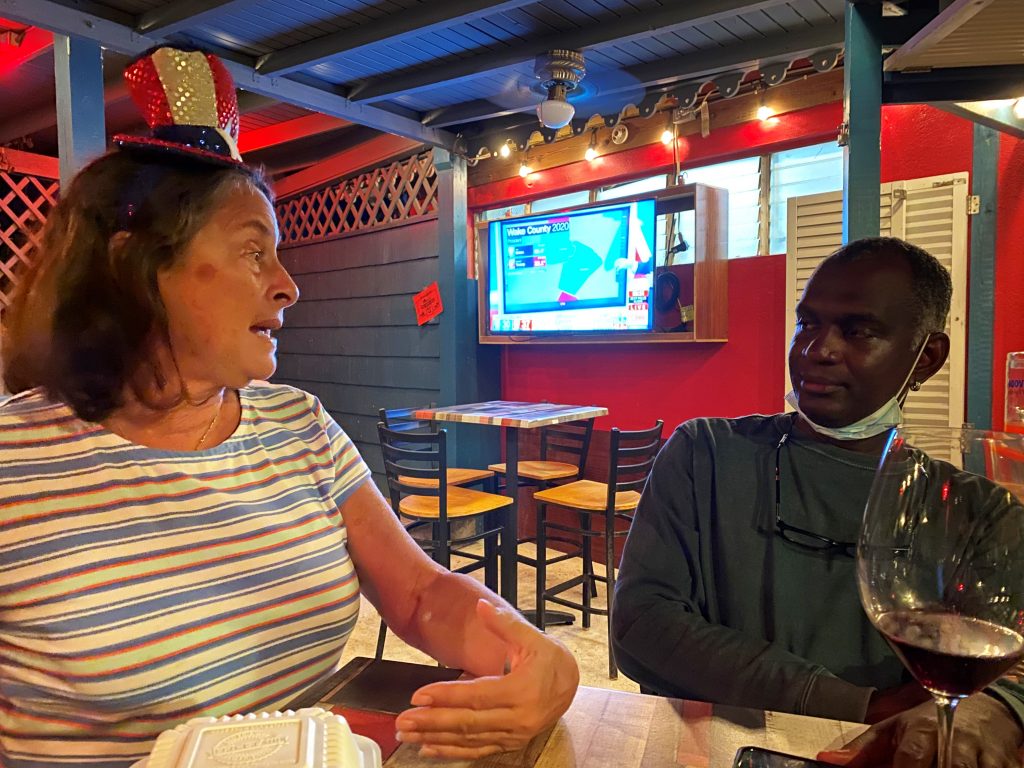 Tortola residents Christine Bancheri, left, and Dave Latchman discuss the history of controversial elections while tracking the United States presidential election results during a watch party on Tuesday evening at Red Rock Restaurant & Cafe in East End. With record early election ballots to process in a close election, major news outlets predict that it could be days before the final tallies are made and a victor declared. (Photo: DANA KAMPA)

The closely watched United States presidential election proved to be a tight race, as patrons at one watch party in East End noted by cracking jokes about “Dewey wins!,” the infamous headline printed by newspapers that prematurely called the 1948 US election results incorrectly.

Starting on Tuesday, viewers here and abroad have been avidly tracking the results of a race too close to call before the Beacon’s deadline yesterday afternoon, even as incumbent President Donald Trump claimed “victory” from the White House.

Late Tuesday evening, a few dozen people sat under the string lights of Red Rock Restaurant & Cafe in East End, bantering about the state of US politics, participating in a mock election to predict the next president, and pausing any time an alert flashed across the television screens broadcasting results.

Tortola resident Paul Abrahams said he came out to watch the election mostly out of curiosity, given the heightened anticipation of the results compared to 2016. He accurately predicted at the beginning of the evening that the race would be too close to call on Tuesday.

Reflecting on the past few years, Mr. Abrahams said he doesn’t necessarily dislike Mr. Trump as a person, but he expressed concern that the US leader has been inflaming tensions around the world, particularly with blistering rhetoric about military families, people of colour, women and journalists.

“I’m just tired of the things that come out of Trump’s mouth,” he added.

Christine Bancheri, a Virgin Islands belonger who voted in the Massachusetts race after receiving her ballot via email, said she believed it was important to vote this year, explaining that people who don’t participate don’t have much of a leg to stand on when objecting to the results.

She said this point was hammered home for her when she didn’t vote in the last election because of travel constraints.

Ms. Bancheri also noted the controversy this year as Mr. Trump has sown doubt about the validity of the election.

During a speech early yesterday morning, the president falsely claimed that he had won the race despite the fact that not all the votes had been tallied, and suggested that he would go to the US Supreme Court to stop the remaining votes from being counted.

The president’s claims have been heard around the world. Here, Mr. Abrahams said regardless of who wins, he doesn’t believe the election was fair.

“I think this is a rigged election, but they’re not saying rigged in whose favour,” said Mr. Abrahams, who added that he would prefer to see Mr. Biden win but wasn’t optimistic. “Just like 2016, it’s a possibility Trump might win again.”

But Ms. Bancheri, a self-employed graduate of Rutgers Law School in New Jersey, noted that the US has a long history of controversial elections, and she shared the story of the disputed election of 1876. That year, Republican candidate Rutherford B. Hayes won against Democratic candidate Samuel Tilden, but the results were marred by disputes that were not resolved until congressmen struck an informal deal that ended the Reconstruction Era by pulling federal troops out of the South.

Looking ahead, Mr. Abrahams said that if his prediction comes true, the US can likely expect more of the same from Mr. Trump.

Red Rock owner Carris Penn said he wanted to host a watch party at the restaurant both as a reopening for the season and to provide a space for people to discuss the results as they were announced.

But other watch parties included quieter reflection during the broadcast. One of the bars televising the presidential results was the Watering Hole in Road Town, where the handful of patrons stayed fairly calm as results started to roll in.

Most attendees weren’t paying much attention to the election, and those who were seemed mostly indifferent about the outcome.

When it came down to who would make a better president, several people seemed to believe that neither candidate was up for the job.

“I just hope that Trump doesn’t win,” said Kelton Edwards, a Jamaican, while someone nearby said he thought Bernie Sanders, the Vermont senator known for championing democratic-socialist causes, should have been the Democratic nominee.

At Aromas in the nearby Cyril B. Romney Tortola Pier Park, a group of friends were similarly divided.

Some of them felt that Mr. Trump’s rhetoric has emboldened racists and preyed on people’s worst tendencies.

But others thought that his outsider perspective brought needed change to the US political system, and commended him for presiding over a particularly strong economy before the Covid-19 pandemic ripped it to tatters.

Virgin Islander Benito Wheatley, special envoy of Premier Andrew Fahie and policy fellow for the Centre for Science and Policy at the University of Cambridge, speculated yesterday afternoon that initial predictions and polls may have placed too much emphasis on the importance of Mr. Trump’s response to the pandemic, leading to a better-than-anticipated performance on his part and a closer overall election.

He added that it was interesting to note how Caribbean-American voters cast their ballots in states like Florida and Texas.

Information from exit polls, he said, suggested that these voters, who didn’t vote in a monolithic block, seemed to prioritise factors other than Covid-19, such as a perception that Mr. Trump positively influenced the economy prior to the pandemic or an aversion to messages depicting Mr. Biden as a socialist candidate.

The final results of the election remain to be seen, but Mr. Wheatley told the Beacon that one aspect that countries outside the US seem to be taking away is that the country remains deeply divided.

“I received a number of messages from friends in Europe and other places who said American politics is very baffling to them,” he said. “They are surprised that the election could be this close. … There’s a significant segment of the population that clearly supports President Trump, and that is something that the rest of the world will have to come to grips with at some point.”

As of Beacon press time yesterday afternoon, Democratic candidate Joe Biden was leading the race to the 270 electoral votes needed for a win, with 237 votes, according to data from The New York Times based on National Election Pool/Edison Research.

But Mr. Trump wasn’t far behind with 214 votes, and he had already announced plans to request a recount in the closely fought state of Wisconsin, which the Associated Press called for Mr. Biden yesterday afternoon.

By that time, it seemed that the race would come down largely to such battleground states, which also include Arizona, Michigan and Pennsylvania. Arizona has 11 electoral votes, Michigan has 16, Pennsylvania has 20, and Wisconsin has 10. Shortly after the Beacon went to press, Michigan was called for Mr.  Biden. If he were to win the two other states where he held a lead, he would win the presidency.

The races in all four states remained close as of yesterday afternoon. Mr. Trump held a modest lead in Pennsylvania, but Mr. Biden led in the other three.

As of press time, the states of Alaska, Georgia, Nevada, and North Carolina also did not yet have projected winners.

Joey Waldinger contributed to this report.